As per the review of Stellaris, the premise for writing to Age of Wonders: Planetfall is that of not pretending to "speak" to an audience of hardcore gamers. Primarily because the players who live on bread and turn-based strategy will have already bought the title of Triumph Studios; secondly, because the in-depth analysis that that type of user is able to reach does not need an article that, inevitably, can only touch the surface of a gameplay as complex as that proposed by Paradox. But let's go in order, starting from the usual trailer already capable of offering you a detailed overview of the game.

I took it easy: the 4X turn-based strategies such as Planetfall or Imperator: Rome - expect a review of it in a short time - are often "victims" of sudden updates capable of changing the cards on the table and upset the mechanisms proposed on day one . With the above premise, there would be no point in rushing to come out with an article that is somehow already tainted by a patch. Both Imperator: Rome - for which we are waiting for the 1.2 Cicero build, after the 1.1 Pompey of May - as the latest effort by Triumph Studios, arrived with an update to be installed a few days after publication and another one arrived the following week, fall into the category of video games that last (at least) five years, also thanks to the dozens of downloadable contents that in some way continue to renew the play proposal.

To understand that Age of Wonders: Planetfall belongs to this category, however, two hours of campaign are enough, where a rather informative tutorial and an in-game wiki with dozens of items to consult are not enough to orient yourself in this grand strategy which, in a nutshell, can be described as a Civilization of fighting à la X-COM and a territorial expansion by provinces that seems to be heavily taken over by Stellaris (our opinion here).

Some of you, probably, will already have a long experience with Age of Wonders III and will find what has just been written pleonastic, but I bet a Rosario pizza that There are hundreds of potential Vanguards out there waiting for someone to explain why this ambitious all-4X-you-can-eat is worth a shot. Yes, because you have to imagine being catapulted into a world of hexagonal boxes populated by factions that survived - and evolved as a result - a sort of mysterious fallout that occurred two centuries earlier. You will then have your small colony, almost uninhabited, to grow and prosper by annexing provinces, outposts and neighboring structures, and then found a second one much more distant than what the titles belonging to this genre have accustomed us to.

the feedback on the progression of planetary conquest is tangible

The essence of this feature is to be able to specialize some areas of the map in the production of food, industrial, etc. resources. giving the tangible impression of a real large-scale territorial expansion, on the one hand streamlining the macro management of too many "cities", on the other hand avoiding the danger of founding them without solution of continuity for the sole purpose of enlarging one's area of influence. Although it might seem like a minor thing, for the neophyte of the grand strategy having a tangible feedback on the progression of the planetary conquest through the occupation of pre-existing nuclei is, in my humble opinion, a strength not to joke about.. The development of the single colony, in reality, proceeds in a fairly canonical manner, that is, by placing in the production queue the various structures that will allow the population to increase, the happiness of the same, train or build troops and assault vehicles and so on. We shouldn't expect the variety - or the Wonders - that Civilizations have accustomed us to, diluting the feeling of mastering a unique play style dictated by the choices made, but I believe that a greater linearity in the options leads to a lower initial disorientation, net that the Planetfall difficulty curve is indeed very steep for anyone. At the same time, even the tree of technologies - which here is divided into two categories: military and social - runs along already beaten paths. On the one hand, it focuses on war power and its equipment, on the other on the "life" of the population, on the optimization of the collection of resources and on the widening of the range of macro policy interventions that can be activated. I point out that among the expendable resources there is that of influence, that is a sort of accumulable “score” capable of defining the power of territorial acquisition or intervention in the style of deus ex machina even on a planetary scale.

Thus we come to the X-COM-style turn-based battles featuring assorted militias, war machines and commanders with unique abilities and can be acquired with a system of experience points to be invested at will. Each unit can be modded with the technologies discovered and special actions such as aerial bombing can be activated, only declined according to the futuristic style of Planetfall made of lasers, nano particles and drones capable of altering the status of the opponents. As for the Firaxis masterpiece, the whole team takes turns and can include up to six “pawns”, some of which are made up of several elements such as riflemen who travel in groups of three. Since all the teams adjacent to the hex chosen as the target participate in the clash, 42-unit pitched battles can be played… and this is something that is not seen in all 4Xs.

Also noteworthy is the possibility of automating the combat, even from a purely didactic point of view, and that pinch of narrative that accompanies the campaign missions. For the rest the rule of "who is best equipped wins" applies, in the strict sense of the assumption, leaving to the masterpieces of the genre the task of teasing the player's intelligence to invent art-house strategies and overturn a battle in which one is having the worst. On this issue I discussed with my friend Claudio Fabbri of Gameplay Café, a true hardcore gamer from Paradox and a collaborator of BoP Italia (a community that has been involved for years in the free localization of the Swedish publisher's strategists) who summarized with a: "I would preferred a greater possibility of development of the base units, because otherwise the most convenient tactic [is to] make a tech rush to the largest units and then lead them all ”. I confess that in the panorama of the playful offer of Planetfall, really wide-ranging, this less sophisticated gameplay was not a big limit to the fun for me, net of having always used it alone at a "normal" level of difficulty. You can create very different teams and specialize them according to need, they favor speed or critical mass according to need or mission - and there are many, even secondary ones - of the moment.

If the main campaign proceeds by planets and objectives that offer a cross-section of all possible game options, ensuring a narrative flow consistent with the context, the scenarios represent the classic mode of planetary conquest. You can choose the faction - with unique models and engagements - the secret technology that represents the strategic fulcrum on which you will have to work to get the victory, perk, background and passive skills of the commander for a total of combinations that I can not really calculate. From a technical point of view, I have no major flaws to report if not some slowdown during the enemy combat turn, certainly caused by my NVIDIA GeForce GTX 1050 Ti which, at best, can't keep up. Models, animations, map morphology, palettes and color contrasts are curated and made with great attention to aesthetics, including the interface: it does its duty trying to streamline - as much as possible - the impact of the menus on the game world. I'm sure I've already written it: the difficulty curve rises very quickly. Age of Wonders: Planetfall is not a title for Sunday strategists and it needs time to be understood even in its elementary mechanics.

I played Age of Wonders: Planetfall thanks to publisher-provided code on AMD Ryzen 5 1600 PCs, 16GB RAM, SSD, and NVIDIA GeForce GTX 1050 Ti at the highest level of detail possible. 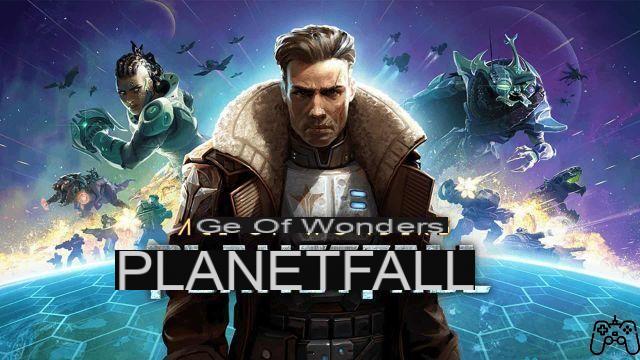 However, I want to recommend the purchase - and without too much delay - to all those readers who love futuristic settings, would like to look at the 4X triple A, shrugged at Civilization: Beyond Earth in 2014 and are fascinated by the freedom of movement offered by strategists in turns. There would be two different products on the plate, served as a very refined single course: grand strategy and petty military tactics in a respectable narrative context, where the only and almost unforgivable flaw would be the absence of an Italian location. Ca va sans dire: that of the language is an almost insurmountable obstacle for non-English speakers who try their hand at games like Planetfall and you have to take this into account when buying, otherwise running the risk of feeling frustrated by mechanics that are not fully understood. The vote at the bottom of the page is just a number; an issue that can help the audience this review is intended for to understand how much I liked it; a number that places Age of Wonders: Planetfall in the Olympus of 4X along with almost all of the recent Paradox production.

Notwithstanding the fact that units and animations, considering the genre to which it belongs, are of great workmanship, I loved - in particular - the chromatic choices and the modeling of the planets.

Soundtrack and voice acting do their job without leaving a tangible mark or enhancing the gaming experience.

It is like the Rubik's cube: very difficult to master but there is no need to sleep at night if only for the desire to steal its secret a little at a time.

Did you like the article? Share it!
Audio Video Age of Wonders: Planetfall – la recensione for dummies
Imagine Earth, la recensione “living life in peace” ❯

add a comment of Age of Wonders: Planetfall – la recensione for dummies