Assassin's Creed: Odyssey is the new chapter of the popular Ubisoft series, which then returns to the annual release after the parenthesis of Assassin’s Creed: Origins, from which it takes most of the mechanics. There is always the crafting, the increase of the protagonist's stats every time he levels up and the possibility of forming love affairs. And again, dynamic climbs, the eagle (Icarus) to mark enemies and points of interest, a horse for long journeys and an open world structure that mixes exploration, travel and combat as always, in this case by land and sea.

But there are some new features and a series of refinements and updates to certain mechanics, which significantly improve it compared to its predecessor, and increasingly diversify from the classics of the saga. Set in 431 BC, four centuries before the events narrated in Origins, during that Peloponnesian war that saw rivals fighting each other, Sparta e Athens, and their respective allies, Assassin's Creed: Odyssey in fact marks a further push towards the RPG genre, and for the first time it allows you to choose whether to play a male or female character.

In Odyssey, in fact, the player is called a play the role of Alexios or Kassandra, descendant of the family of the brave Leonidas, the Spartan king whose broken spear always carries with him. As always, we avoid spoilers about the events of the game, and we limit ourselves here only to writing that the plot is not very original, but it is pleasant to follow with even some twists, revealing itself boring only in some points set in the present. Both Alexios and Kassandra share the same story and the same equipment, therefore playing one rather than the other does not lead to radical changes within the plot. Rather to affect it, on some events in the game and on the endings are the dialogues, many, thanks to the presence of a system of multiple-choice conversations reminiscent of that of Western role-playing games.

The decisions made in key moments of the adventure shape the character traits of the character and a world that continues to evolve by reacting to his choices. A world where in my opinion it is only right to immerse yourself completely because the strength of Assassin's Creed Odyssey also resides in its evocative scenarios and in a free structure that gives a great sense of adventure and exploration.

The Ancient Greece of 431 BC, with its temples, its myths, its huge statues dedicated to the gods of Olympus, its polis and its culture is truly faithfully reproduced in all its splendor, and I personally found it extremely fascinating ride on its roads or plow its rivers and seas to explore it thoroughly. From the snow-capped peaks of the mountains to the depths of the Aegean Sea, it is indeed possible to visit a very large map dotted with cities, unexplored places and hidden treasures. A living and dynamic world, with a day / night cycle that influences the actions and activities of all non-player characters and the animal species that populate it, full of legends and dangers.

He can let himself be guided by the main plot, following the course of events normally and get to the end within a certain number of hours, or going slowly, loitering among the people and the locals, the seas and the forests, trying to complete secondary missions, mini -games, or simply walking in an absolutely believable virtual world for the fun of it, thus ending it with triple the actual hours needed to complete it. Which then is the option chosen by me, the one I personally prefer to fully enjoy this type of games.

But it's not just the surface world that arouses some interest in Odyssey: even the exploration of the seabed can hold many surprises. In fact, under the surface of the ocean there is a mysterious world that is just waiting to be discovered, from the ruins of lost temples, to the treasures to be plundered from sunken wrecks, to the long forgotten underwater tunnels which, however, for this very reason can reserve some surprises. How pleasant or unpleasant it is then for the user to find out.

In the game there are four basic types of boats, each with unique characteristics, from small and fast pentecontera to the most powerful triremes. Each ship can be customized, upgrading its weapons, shields and crew, which in turn can affect the ship's attack and defense statistics thanks to the abilities of its builder. Among these there are also the lieutenants, stronger and more skilled crew members than the average, enlisted after defeating them after a boarding.

As in other chapters of the series, in fact, starting with Assassin’s Creed IV: Black Flag, during navigation it is possible to come across ships belonging to different factions, then Athenians and Spartans, or mercenaries and pirates looking for boats to plunder. Defeating an enemy ship allows you to obtain rewards and recruit its crew depending on whether you decide to sink or board it.

Lieutenants also come in handy on dry land, as they are usable in open field battles within a certain time frame. Odyssey introduces the disputes between factions, which can be tackled by launching into the fray after taking sides, or by directly hitting the commanders and champions of the opposing army to facilitate the final victory.

Hand-to-hand combat is based on the same philosophy as Origins, and is therefore focused on freedom of movement, but also on a decent dose of strategy: parries and dodges, counterattacks, but also timing and precision in using weapons and skills in combination are the best way to face enemies, which seemed more agile and aggressive to me compared to the recent past.

You can customize the fighting style by choosing from a wide range of upgradeable weapons, e lots of specializations from branches Warrior, Assassin or Hunter. The latter can then be assigned to the pad buttons using a special wheel. Their use is linked to the bar adrenaline, which recharges with combos, parries and dodges: it is divided into four segments, each of which is consumed based on the power of individual skills, such as the Spartan kick or the predator's strike.

These specializations undoubtedly offer a certain advantage to the player within the battle economy, but they don't balance it in his favor in my opinion. At the highest difficulty levels and against multiple or strong enemies such as bosses, mercenaries or lieutenants, they are only useful if accompanied by the player's own skills in approaching, as described a few lines above, the fight by rotating them and using them carefully at moments appropriate for the fight.

Last but not least, the system of morality also changes: by killing innocent people or in any case in the sight of everyone, the character is no longer desynchronized by the Animus, but is given a bounty that will attract mercenaries ready to do anything to collect it. The higher the payout, the more bounty hunters will come after him.

Moving on to the technical part, there are three things in particular that struck me about this game: the sensitive but perceptible leap forward as regards the graphic sector, already excellent in Origins, the almost obsessive attention to detail in the reproduction of historical scenarios and characters and the soundtrack, which acts as a perfect counterpoint to the gameplay, accompanying the progress of history with sounds from other times, with quarter tones, choirs and instruments such as the zither, the aulós and the lyre that prevail over the rest, others more modern, with fast-paced songs capable of reaching real epic peaks in the most important moments.

The graphics, as mentioned above, it does not revolutionize the saga or mark a huge leap forward compared to the predecessor, but certainly, thanks to a series of tweaks it is significantly improved. Too bad for some pop-up phenomena and some frame rate drops typical ”of many open world games, probably due to a lack of optimization and the size of the map itself; phenomena that albeit annoying in my opinion however, they do not affect the usability of the game and its general quality. In short, nothing that Ubisoft cannot solve with some updates. On the other hand, I found the non-player characters improved, which are made a little better, and the facial animations in general. For those who own a PlayStation 4 Pro and a TV with full HDR support, among the options it is possible to adjust some parameters to optimize the brightness on some values, to the benefit of evocativeness and sharpness of the scenarios. 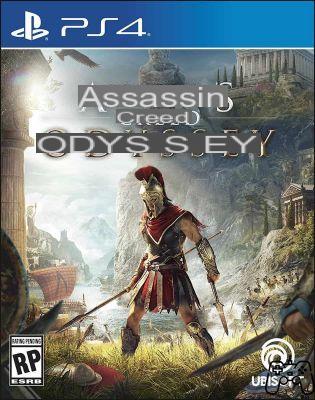 Further away from the style we knew for the series, the new episode of Assassin's Creed continues the work of structural transformation started by Ubisoft with Origins. Odyssey is in fact a free roaming adventure with a cinematic cut, which compared to its predecessor treads its hand on role-playing elements, on a better refined battle system and on a fascinating atmosphere like few others. All supported by a good level of challenge and dozens of things to do, customize and discover within a huge map and not without surprises.

The graphic sector is excellent, with a well-chosen character design and an equally splendid design of the scenarios: a real historical fresco in digital. Great attention to detail and more refined and detailed secondary characters than in Origins. Too bad for some drop in frame rates and scattered pop-up phenomena.

The musical accompaniment is excellent, characterized by decidedly evocative pieces that largely reflect the sounds of the Greek tradition, with peaks of epicity in the key moments of the adventure. Good dubbing in Italian.

Did you like the article? Share it!
Audio Video Ancient Greece in our Assassin's Creed: Odyssey review
Come ottenere The Breakup M4A1 in Call of Duty: Warzone ❯

add a comment of Ancient Greece in our Assassin's Creed: Odyssey review