When Ubisoft announced a hiatus for its Assassin's Creed series in 2016, many rejoiced at the news. For some time now the series seemed to have anchored itself on certain "static" positions in terms of playability, no longer managing to bring significant news to mechanics considered in many cases too old-fashioned. Hence, stopping producing a new chapter every year to focus on development was seen by many, myself included, as a wise choice.
Personally, I had played the last few chapters more because I was kidnapped by the settings and the atmosphere, rather than by the playability or the story itself. So much so that with the same spirit, I admit, I then started playing Assassin's Creed: Origins too, only to be pleasantly struck and partly surprised by the news.

Starting with an open world structure within one of the most fascinating settings that could be chosen: we are in fact in Egypt, in 49 BC, in the midst of the war between Cleopatra and her brother Ptolemy, that flanked by the mysterious Order of the Ancients risks bringing to decline a kingdom that until that moment is experiencing an era of splendor. In this scenario the player plays Siwa's Bayek, a servant of Pharaoh but close to the people, blinded by anger and grief for the loss of a son. To avenge his death he is willing to do anything, even to explore every corner of the vast Egyptian empire, in an engaging story that also unfolds through a series of subplots narrated in the secondary missions, against the backdrop of the origins of the Creed and the eternal struggle between Assassins. and Templars.

The strength of Assassin's Creed: Origins actually lies in its evocative scenarios and in a free structure that gives back that sense of adventure and exploration that seemed to be missing in the most recent productions of the series. The world created by Ubisoft is alive like never before, with so many activities to do, hidden treasures and places to discover. Everything is explorable and there is also a day / night cycle that affects the actions and activities of all non-player characters and animal species that inhabit the lands and waters of the Nile.

However, to move to the various regions into which the map is divided, you need to improve the characteristics of Bayek leveling it up through classic RPG-style experience points, and through the equipment worn, which affects some of its parameters. Leveling up also means obtaining a skill point to be spent in one of the three branches of enhancement available, namely Warrior, Hunter and Seer, which unlock particular actions related to them and very useful inside a finally more dynamic combat system and tactical, characterized by hits, dodges and saves, and in general by a good level of challenge determined by more attentive opponents than usual.

Pad in the hand you "feel" a greater "grip" on the character, to the benefit of fun, fluidity and a gameplay that if on the one hand is attributable to the other chapters of the saga, on the other hand it has been renewed a lot also in the commands.
On PlayStation 4, two control methods are proposed, one customizable and the other fixed, where the use of the backbones for the light attack and parries are favored, the two triggers for heavy attacks and free aim, R3 to engage instead a specific target, the Square button for dodging and so on. I found this mapping particularly effective and "comfortable" to use, very intuitive once you get used to the scheme.

Another important novelty is the presence of Senu, who replaces the Eye of the Eagle. This bird can be recalled at any time to have it inspect the surrounding areas from above in order to report any hidden places and dangers, as well as elements with which they can potentially interact to exploit them in some duel or raid. The soundtrack, created by composer Sarah Schachner, then does the rest, acting as a perfect counterpoint to the gameplay, accompanying the progress of history with music that brings to mind North African and Middle Eastern sounds, then enhancing the topical moments of the adventure with peaks of epicity.

The songs that make up the soundtrack are decidedly evocative, worthy travel companions of the player within particularly fascinating settings and situations.

In this sense, the work proposes a technical sector of all respect also for the graphic aspect. From this point of view, the title offers very accurate and detailed scenarios, with breathtaking views capable of leaving your mouth open more than once and entice the gamer to take some pictures with the appropriate photo mode, which can be used by simultaneously pressing the L3 and R3 keys. on the controller. The icing on the cake is the support for HDR on PlayStation 4 Pro, able to enhance the views and the lighting system even more. Within the options it is possible to adjust two parameters to optimize the HDR effect, namely the Maximum Luminance and the Paper White.
More than once I do not deny that I was "stuck" to calmly admire a sunset near the Pyramid of Giza, or the sunrise in a corner of the city of Memphis.
The only discordant note are the secondary characters, many of which are made with a lower level of detail than the main ones, even in terms of animations and facial expressions. 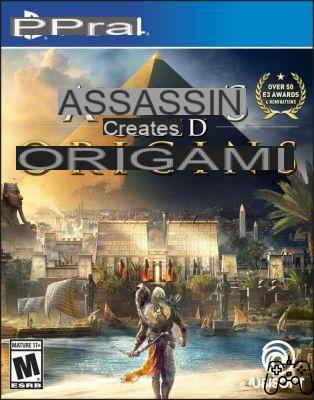 Assassin's Creed: Origins is certainly one of the best games in the series. And it is in several respects. It seems clear that the extra year used by the developers to partially rethink game schemes and mechanics has been exploited properly and has served to return to the public a vast title, with a myriad of activities to be carried out, RPG elements, a system of finally fun fighting and a well told story. All set within a setting that is nothing short of fascinating, represented in a spectacular way through an excellent technological sector. All elements that overshadow those marginal defects that are present, but which, moreover, do not affect the usability of the title.

Excellent choice of ancient Egypt as the setting, therefore the work of the developers on scenarios and main characters. The secondary ones, less refined and detailed, are a bit disappointing. Good support for PlayStation 4 Pro.

The musical accompaniment is excellent, with decidedly evocative pieces that recall those of the North African tradition, with peaks of epicity in the key moments of the adventure. Good dubbing in Italian.