At the heart of the Cold War with Call of Duty: Black Ops Cold War

I don't know about you but I, if I think of Call of Duty, I think of Black Ops. Not necessarily the first and glorious episode but also those that were created later, despite the ups and downs, by the increasingly skilled hands of Treyarch. So why hide the exaltation in writing this Call of Duty: Black Ops Cold War review that promises to bring us back, at least narratively speaking, to the glorious themes and characters of the first chapter of the saga?

In short, the things to talk about are different, the modalities abound and the hours of entertainment promised are many so let's hurry up and follow us in our review of Call of Duty: Black Ops Cold War per PlayStation 5!

That the blockbuster made by Treyarch in collaboration with Raven Software was aiming high was clear from the first trailers and information circulating online months before its release. The developer has worked hard to offer a chapter full of content and multifaceted as never before. Also thanks to the 'summer' success of the Warzone mode, COD Black Ops Cold War responded present at the appointment with the next-gen and arrived in the shops and homes of players loaded with high expectations. The development of contents in fact, today as never before, no longer revolves around the multiplayer sector alone but branches out between cooperative, arcade and single player modes, to try to satisfy all the fans that the Black Ops brand is able to call on. appeal.

Gentlemen, this is getting serious

And therefore, from a narrative point of view, this Call of Duty: Black Ops Cold War positions itself exactly after the end of the first chapter released ten years ago and re-proposes some famous characters and faces from the series that fans have come to love and hate. The player is then catapulted into a frantic adventure, amidst the rooftops of Amsterdam, memories of Vietnam and even an undercover operation in the KGB headquarters. Yes, because, as the name suggests, we are in the middle of the Cold War and our country, the USA, needs us to foil a dangerous Soviet plot.

The air of tension between the two countries is palpable and during the adventure, we will be able to attend real briefings on both sides: both with President Reagan and with Gorbachev, in the role of undercover agent. The supporting models but also that of the 5th President of the United States are excellent on PS5, as are the expressions and the game textures, in every moment of the campaign. A big step forward has been made from this point of view, taking advantage of the release of the new consoles, with a truly noteworthy upgrade for PSXNUMX and Series X. The resolution up to 4K 120fps, combined with Ray-tracing and an excellent audio sector, make the title truly captivating even in its single player mode.

The work done by Raven Software around this new adventure of the trio of Woods, Mason and Hudson is certainly something more that longtime gamers will appreciate. The 'turning point' linked to the personalization of the protagonist - in our case this Thomas “Bell” Stio - which implies the choice of some aesthetic parameters, in addition to the name and his background which translates into two perks.

The settings as mentioned are many and the interiors, such as the KGB headquarters, thanks to the new hardware are enjoyable like never before. This chapter, in addition to the slightest possibility of customization, also introduces a mission management system with clues to collect and timelines to follow. The rhythm of the story in any case is not affected, ending up proposing exactly what is expected from the campaign of a Black Ops or lots of action, explosions and adrenaline. Finally, a pity for the last lines and the twists, linked to some narrative artifices that I did not appreciate and that ended up quickly getting tired.

In our review of Call of Duty Black Ops Cold War, as you may have understood, we want to emphasize a lot the great technical breakthrough that has taken place and how the developers have been able to exploit part of the potential of the new hardware since this chapter. The difference between PS4 and PS5 is there, it makes itself felt and also influences our style of play: if on the one hand textures in 4K and lighting are nothing more than good news for our eyes, on the other the extreme fluidity of gameplay is a significant competitive advantage if you are hungry for multiplayer.

Paying for the upgrade… seriously?

Net of a genuinely ridiculous choice, such as charging five euros for the upgrade of the game digital from PS4 to PS5, the next generation version of Treyarch's FPS is truly unprecedented. No apparent improvement, however, for what the code of artificial intelligence is: always very clumsy and slow in reflexes, almost clumsy.

Of course, it is also true that a large percentage of COD players will never have to deal with characters used by the computer but we, like every year, continue to hope for a better job. Always remaining on the AI ​​theme, we can say instead that we appreciated the order that has been done around it to the new Zombie sector of the game, starting with the integration of progress between the so to speak 'normal' multiplayer and this now inevitable game mode. A modality perhaps afflicted by a certain immobility over the last few years but always hilarious and exhilarating to deal with with friends. And indeed, thanks to the new graphic detail, it is also starting to become something scary.

The next-gen, as we struggled to say articles after articles, does not only pass through a mere graphic improvement but also and above all concerns the creativity of those who develop. In recent weeks we have praised the now dear DualSense and we were delighted to see an excellent introduction of some of the innovations that the pad already offers in this new chapter of COD. Net of the vibrations that literally upset the pad 'from the inside' in case of bomb explosions or mines very close, the real enjoyment comes thanks to the haptic feedback of the triggers of the PS5 pad.

The aiming system and that of the controls are always the same except that, this time, starting from the pressure of the L2 key, a certain resistance is perceived. The best comes when we obviously point the finger on the other ridge, R2, to fire: depending on the weapon at hand, the trigger feedback is completely different. In the case of a simple 9mm, the trigger is softer - while maintaining that sort of step that separates the last pressure before firing the firearm - if, on the other hand, we hold a submachine gun or in any case a weapon that is no longer single-shot. , the trigger opposes another type of resistance and begins to vibrate, when pressed, with each bullet that comes out of the muzzle.

Something incredibly fantastic and realistic that also features other variations on the theme: an RPG for example means a much harder trigger to pull and so on. In short, a new paradigm of immersion never seen before and to which I became fond of in a very short time, first for the entire single-player campaign and then in the other modes. To be honest, however, I must also tell you something in a preliminary way: if you are looking for the maximum challenge and performance possible with regards to online multiplayer, then you may get tired of this option very soon (however, it can be deactivated from the menu, ed) as potentially frustrating and can burden your game and negatively affect your competitive performance.

We reviewed Call of Duty Black Ops Cold War with a PS4 code sent by the publisher and upgraded to the PS5 version. The download is over 100 Gigabytes but can also be performed in part, according to your interests. 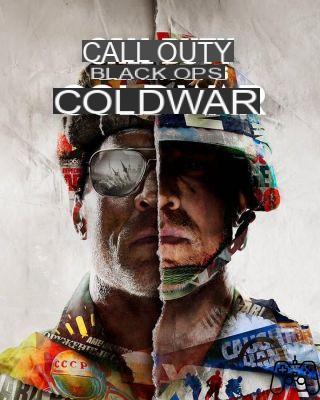 We are all here

At the antipodes of what we have told you to be a good single player mode, this time we find a rich multiplayer sector designed to please different audiences. First, it's nice to note how the Battle Royale Warzone mode has been integrated into the game menu, despite responding to another development team and following other rules, so as to give an indication of how vast the possibilities for fun are within the Call of Duty franchise. The maps, as always at the exit, are a handful but will soon be stuffed with free additions. The design of the places, their structure and the feedback of the weapons make you feel at home right away: aiming, controlling the recoil and firing is even more fun than in the past thanks to the PS5 pad but in general, the compartment audio of each version, it helps a lot in making the gaming experience more believable.

Each map features the usual corridors and more open areas, where it is easy to fall victim to some snipers. The time to kill is always quite generous and contributes to a gameplay experience based on players' reflexes and responsiveness. It is always pleasant to face the challenge in the classic modes, so to speak, the historical ones and which no longer need to learn to master. Call of Duty Black Ops is this here, perhaps there is no need to think of who knows what addition, to introduce particular vehicles or series of points that break the balance. By now both the public and the developers have a clear idea of ​​what they want from a game of this type and it is not difficult to find the right fit. And then, let's face it, there is Nuketown '84.

Truly captivating technical sector, realistic effects, particles and a rich and credible lighting system. The 4K resolution and HDR support make some moments even more nuanced and beautiful to see while the Ray-Tracing makes some areas and the interiors of buildings beautiful like never before.

Without infamy and without praise, he takes home his task without excelling at any time. There is a lack of some epic track that instead accompanied the old chapters of the Black Ops series.

An already multifaceted and varied gameplay becomes even richer and deeper thanks to Dualsense and a much more engaging audio sector than before.

Did you like the article? Share it!
Audio Video At the heart of the Cold War with Call of Duty: Black Ops Cold War
Minecraft | How do Iron Golems spawn? (1.14) ❯

add a comment of At the heart of the Cold War with Call of Duty: Black Ops Cold War