Batman: Arkham Collection, the Dark Knight returns to Xbox One!

The Batman by Warner Bros Inc. and Rocksteady Studios has certainly been one of the most important hits of recent years. The Bat Man was the protagonist of a trilogy of action games that, net of some defects, was able to satisfy the public of fans and recreate the universe of popular DC Comics character.

The first title of the collection is Batman: Arkham Asylum: Set in the Arkham Asylum, a gloomy neo-gothic style building where mentally unstable criminals are locked up, sees the Joker implement a brilliant plan to transform the "penitentiary" into a stronghold from where he can dispose at will of the help of his diabolical tenants against the Dark Knight.

Batman: Arkham City instead has a different setting, this time on the streets of Gotham. It is not a huge space, at least when compared to truly free-roaming products, but it still manages to give the feeling of being in large spaces. The story begins a few months after the events in Asylum, when the new mayor of Gotham, Quincy Sharp, decides to move the criminals from Blackgate Penitentiary and those from Arkham Asylum in a restricted and guarded area within the city, which is renamed Arkham City. But soon the situation degenerates and in trying to restore calm the Bat Man has to think about it.

The third and final chapter, Batman: Arkham Knight, instead sees the hero engaged in facing the threat of a new powerful enemy, the Arkham Knight (character created by Rocksteady Studios working closely with Geoff Johns, creative director of DC Comics Entertainment) in a semi-deserted Gotham due to the threat of Scarecrow to detonate a series of bombs containing a new strain of his hallucinogenic chemical toxin.

Three beautiful stories written by Paul Dini, complete with subplots and side stories not necessarily linked to the main plot, which develop through text files, optional missions and DLCs. Unpublished scripts that I particularly appreciated because on the one hand they have their roots in the vast literature dedicated to the masked hero, on the other they re-elaborate and adapt them, bringing them into a new reality with “original” stories.

In terms of playability, the three titles have a rather similar structure, with a progression marked by a series of events and several secondary and optional missions. The hybrid scheme manages to amalgamate the various elements that compose it quite well, such as the action, the adventure, the RPG elements related to the accumulation and expenditure of points in improving the skills of the character and his equipment, the stealth phases and those fighting games, the latter focus on free-flow combat system.

Each chapter maintains these peculiarities, while at the same time smoothing out certain defects and expanding the possibilities in terms of gameplay and content. New gadgets, moves and vehicles for Batman, better armed and more numerous enemies to face, investigative missions and greater interactivity with the scenario and with suspended elements, resulting in greater game development even vertically, with dozens of buildings and holds on which to climb or glide, they have made it possible over the years to make the adventures of the Bat Man more interesting without distorting the formula.

In the last one, Batman: Arkham Knight there is also the Batmobile, which adds new possibilities in terms of gameplay. His presence was not welcomed positively by all fans of the saga due to his unfriendly maneuverability and due to some levels of play in many cases repetitive and difficult to necessarily play on board the car.

As for the technical part, the first two chapters are taken from the Batman: Return to Arkham edition, where they had already been "reworked" for the next generation consoles by the Virtuos development team using the Unreal Engine 4. The work of restyling in terms of textures, visual effects and animations has given some good results: the general glance leaves more than satisfied.

To disappoint a bit 'are the secondary characters, who after the treatment have something of a plasticky, but the main ones are characterized in a masterly way not only from the point of view of the drawing, but also of the personality, thanks to the excellent writing and interpretation of our voice actors. The acting in particular of Marco Balzarotti and Riccardo Peroni, voices of Batman and Joker respectively, manages to give greater emotional strength to the personality and charisma of the two characters, and it is absolutely convincing and spot on.

However, the entire audio sector is excellent, from the sound effects to the musical accompaniment, which in all games can count on a soundtrack at times imposing in its gait "alongside" the Dark Knight. Returning to the graphics, obviously the best remains that of Batman: Arkham Knight, since the game was originally made for PlayStation 4 and Xbox One.

The three titles should also enjoy optimization for Xbox One X. I wrote "should" because we couldn't test the games on this console. From this point of view we can only speculate, in light of the patches with the "Xbox One X Enhanced" feature released a few months ago by Microsoft for individual titles, which it is possible that they continue to not support native 4K and the increase of the framerate beyond the actual 30, if not in Arkham Asylum where, however, it would not exceed 50fps.

I played the three episodes individually on Xbox One for a total of fifteen hours. I had previously played and completed them 100%, two on Xbox 360 and one on PlayStation 4. 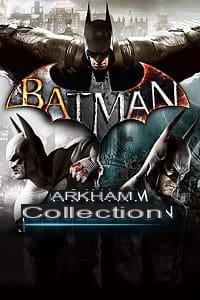 Batman: Arkham Collection is the definitive collection for Xbox One of the three masterpieces dedicated to the Dark Knight by Rocksteady Studios, the London team capable of perfectly recreating the universe of the popular DC Comics character in the gaming field. The trilogy is ideal for all fans of the masked hero who have never played any or any of the games included in the offer and for those who want to rediscover them and put them in their personal collection. Conversely, those who have already done it by taking them individually, are not collectors and are not interested in some graphic retouching, they can easily look elsewhere and avoid the expense.

Good graphic restyling of the first two episodes, excellent that of Arkham Knight. Good visual effects in general, atmospheric ones and the variety of locations, as well as the polygonal models of the main characters, Batman and Joker above all; no real news or unreleased content on Xbox One smoother than the originals.

The dubbing in Italian is excellently acted, and the work of our artists with their voices contributes to better characterize the characters, whether they are good or bad; the soundtrack is epic and the audio effects are also well made.

Game mechanics that are not very original but well structured, able to give a lot of variety to the adventure, with a combat system that evolves with each chapter and that requires a certain attention to the routines of the enemies: furious exchanges of blows, dodges, saves and counterattacks in fact take place with a certain precision; the Batmobile is initially difficult to control and requires a fair amount of practice, even if some missions that see it as protagonist in the long run are repetitive or frustrating due to a series of difficulties not always related to the strength of the opponents, whose artificial intelligence is not always the best. height of expectations.

Did you like the article? Share it!
Audio Video Batman: Arkham Collection, the Dark Knight returns to Xbox One!
The complete solution of Resident Evil 3: Nemesis ❯

add a comment of Batman: Arkham Collection, the Dark Knight returns to Xbox One!