I faced Beyond Blue and the depths of the South China Sea with a deep-rooted passion for this kind of "games". From Arika's Endless Ocean (for which I rented a Wii), passing through the extraordinary Afrika of Rhino Studios on PlayStation 3 (which I had used to ship from Japan), up to the over two hundred and fifty hours spent (in the company of the offspring ) With the'Abz god Giant Squid Studios (here our photo gallery). I was not surprised, therefore, to find that even if everywhere there was written "to complete Beyond Blue it will take you three hours", I have reached over a dozen.

Beyond Blue addresses issues such as industrial abuse, dumping offshore waste and the protection of endangered species

It is necessary to clarify immediately: in Beyond Blue you can explore the waters of the Pacific Ocean to discover the fish and mammals that inhabit them, for a total of over fifty different specimens to be located in the eight main missions. The dives take place in five different environments (or depths), made with great skill to resemble the real ones in every way. The same goes for the behavior of any sea creature encountered, be it a seven-tentacle octopus or a crowned jellyfish. It goes without saying that at a depth of four hundred meters fish will be green that never reach the shallow waters around the atoll, whose surroundings are rich in corals and molluscs but also in bottle-nosed dolphins and Chilean sea devils. The common thread between the missions is represented by the "story" of a (a?) Sperm whale that we can follow by impersonating the protagonist, Mirai, also poised between memories and family ties made explicit in excellently dubbed dialogues both during the underwater missions and in the breaks spent on board the submarine. The plot, while never going deep, is also built on major issues such as industrial abuse, dumping offshore waste and the protection of endangered species, so it remains something interesting to offer to perhaps younger players - or even of school age - to sensitize them to the need for global change. I who have passed the age of forty, however, was surprised by the simplicity with which the authors managed to teach me something (ie on depth drills), while letting me enjoy the sinuous movements and aquatic acrobatics of all the animals encountered, without ever weighing me down.

Beside the gameplay tout court there is an entire section dedicated to scientific insights, accessible from the work table present on the submarine at the end of each mission, where you can learn details about the life of all the animals discovered, with a splendid achievement mechanism that rewards the player with additional information depending on the number of specimens analyzed with the scanner during the dive. These cards are accompanied by a dozen small documentaries of exceptional quality, born of the collaboration between the developers and the authors of the Blue Planet II series produced by the BBC in 2017. I'm not here, now, to tell you the rava and the fava of all the documentaries made by the British broadcaster since 2006, starting from the splendid Planet Earth commented, in Italy, by Andrea Piovan (voice actor, among other things, of many video game protagonists including Liquid Snake in the first Metal Gear Solid on PlayStation One) .

I said: I'm not here to get sick of you despite having spent three nights informing myself about what I would be able to recover and how much it would cost me, because the fact that I was literally lost in studying the life of Sylvia Earle, National Geographic explorer and consultant of E-Line Media for Beyond Blue, rather than understanding why the life of the Leatherback Turtle is so precious or, again, dreaming of joining the crew of one of OceanX's ships, private explorers who have discovered more than one hundred and eighty new animal species and that use technology to "get where no man has gone before" (like Elon Musk or Captain Kirk), are problems that I will discuss with my psychoanalyst (when I have one). I just want you to understand that with Beyond Blue you will acquire a universe of sources and that, if you wish, you can learn more in order to lose it.

Ok: I'm putting too many images and I shouldn't ... But here: Beyond Blue is an interactive documentary, nice to look at, perhaps a little limited in the gameplay but a harbinger of many insights and serious reflections on marine environments, including the need to protect them. If you have a child, if you are a teacher, if you love Piero and Alberto Angela as I love them, there are no compelling reasons to advise against buying them at full price on Steam (but you can also find them on PlayStation 4, Xbox One and Apple Arcade) . If, on the other hand, you are not part of any of these categories, before evaluating the investment you need to know other details (which I will now list briefly).

In primo luogo, Beyond Blue doesn't have that surreal dimension present, however, in Abzû. He must not have it, of course, but on several occasions I have found myself regretting that swimming on the back of dolphins and whales that I was not allowed here. There is no lack of moments of contact between the human being of the future (because Mirai has technologies suitable for deep and long-term immersion that have not yet been developed) and the fauna, but they are confined by the pretense of an alleged realism. I write "presumed" because the second point concerns precisely that sense of impossible given by meeting killer whales, dolphins, rays, humpback whales, sharks, octopuses, two leocorns and another dozen assorted fish in a map of just over 200 meters of diameter. Third "flaw": the story ends immediately. No, really: I almost fell in love with Mirai's sister when the credits arrived. Given the general quality of the title they could have tripled the hours of gameplay entering into the merits of illegal excavations in search of oil or the genesis of the fungus that is poisoning the cetaceans, while respecting the winning formula of in-game dialogues and secondary missions. It is a real shame and I confess that I am anxiously awaiting some additional content to go back to diving, since many of the issues raised have remained suspended leaving me the burden of going to look for them on the net.

I played Beyond Blue thanks to a code provided by the developers on my brand new Nvidia GeForce GTX 1660 Ti: 1080P, ultra details and a frame rate that if I did not limit it made me fly the monitor. 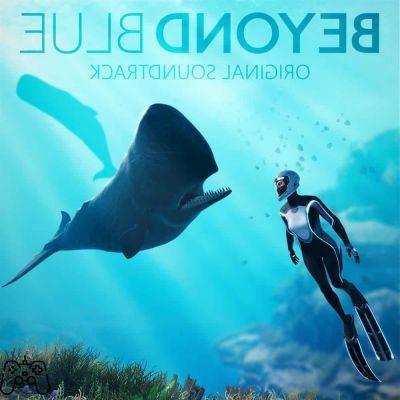 I try to summarize: Beyond Blue is the classic 75 game (even if I drop it a nice 80/100). If you don't feel hungry for insights to look for, documentaries to watch and books to read, it just does a homework, that is to say, offer you two hours of semi-free underwater exploration, in a sometimes photorealistic environment, to understand how a St. Peter's fish or understand how big a giant Tridacna can become. If, on the other hand, you are someone who could enter the Guinness Book of Records for hours spent taking selfies with a Masai on PlayStation 3, Beyond Blue transcends any numerical evaluation to become a must-have. In short: if what is written has somehow teased you, I believe you can proceed with the safe purchase without waiting for the first sale of the season.

Here I leave you one of the "sources", just to understand the quality of the consultants who collaborated in the creation of Beyond Blue:

Beyond Blue's review helps support scientific research on Rett syndrome. Find the details of the initiative at this link.

Technically it has no problems; the animals move naturally and are all very detailed. There are some goodies, especially at large depths, that are worth the price of the ticket, but no one will pull their hair like Crysis.

The soundtrack is made up of indie songs of undoubted quality, although I doubt there will be something left to listen to in the future. On the dubbing of the protagonists, however, you have to take off your hat: Anna Akana (YouTube), Mira Furlan (Lost, Babylon 5), Hakeem Kae-Kazim (Black Sails, Hotel Rwanda) and Ally Maki (Toy Story 4).

If I have to rate the gameplay I have to consider it in its strictest sense and, as already written, it is limited to the free exploration and scanning of over fifty different animals, including fish and mammals of the South China Sea. If you have read the review, However, you will know that alongside these simple mechanics there is a whole set of information cards to collect and mini documentaries to unlock, so don't say I didn't warn you.