Call of Duty: Vanguard is finally available in stores for PS5, PS4, Xbox Series X | S, Xbox One and PC. If you want to know more about the content, like maps and modes, the bonus for PlayStation players or you are undecided on which edition to buy, in this article you will find everything you need to know about the new Sledgehammer Games shooter.

Also before you start, if you haven't done so yet, we strongly recommend that you read our Call of Duty: Vanguard review.

Call of Duty: Vanguard is available in both digital and physical versions for PS5, Xbox Series X | S, PS4, Xbox One and PC via Battle.net.

As for the retail version there is only the Standard Edition. The PS4 and Xbox One versions of the game will also be playable on PS5 and Xbox Series X | S via backward compatibility, but will not offer next-gen features, such as higher framerate, hardware-based graphics enhancements, shorter load times, and others. benefits.

The physical Standard Edition for PS4 will have the option to be upgraded to the PS5 version via the PlayStation Store. The one for Xbox One instead it cannot be updated in any way. Keep this in mind in case you plan to upgrade to Xbox Series X | S and PS5 in the near future. 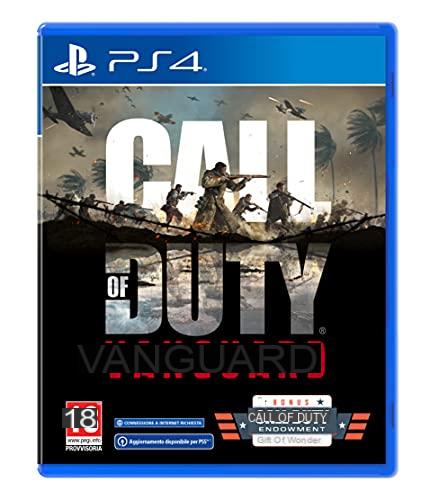 Slightly different speech for the Standard Edition Digital of Call of Duty: Vanguard for PS4 and Xbox One. In this case, in fact, both versions can be updated to the next-gen, with the relative option in the respective stores at a price of 9,99 euros.

If you want to purchase Call of Duty: Vanguard and at the same time plan to switch consoles in the next few months, the option we recommend is the version "Bundle Cross-Gen Digital"available at a price of 79,99 euros. This edition in fact includes both the PS4 and PS5 / Xbox One and Xbox Series X | S versions of the game and the following bonuses:

Finally we have the Ultimate Edition Digital for all platforms, an edition for true fans of Activision shooters is available at a price of 109,99 euros. This version includes:

Do you want to play Call of Duty: Vanguard with your friends, but they have a different console than yours? No problem, Sledgehammer's shooter supports the cross-play, which means that PlayStation, Xbox and PC users can play together regardless of their target platform.

Furthermore the game supports the cross progression (or cross-progression for friends) which means that your progress, game stats and digital content will be maintained even if you switch game platforms, such as switching from PS5 to Xbox Series X, as long as you continue playing using the same Activision account .

The PS5 and PS4 versions of Call of Duty: Vanguard will boast over the other versions of some exclusive bonuses until November 1, 2022.

First, by purchasing the Battle Pass package, PlayStation players will be able to skip 5 additional Battle Pass levels compared to other users. Plus PlayStation Plus subscribers will get a free game package to celebrate the first season of Call of Duty: Vanguard and Warzone starting in December. Subsequently, a new free pack will be available during each season of Call of Duty: Vanguard.

It doesn't stop there, because PlayStation players who play together in groups receive +25% in bonus XP for weapons and can look forward to exclusive Monthly Double XP events, lasting 24 hours each. Finally they also get two additional equipment slots.

Below you will find the system requirements of the PC version of Call of Duty: Vanguard unveiled by Sledgehammer Games. The game has been optimized in such a way that it can be used by everyone, both those with a slightly dated configuration and those looking for maximum performance and graphics quality. Obviously, regardless of the configuration, your goal should be to reach at least 60fps, which guarantees a certain fluidity, essential in a first person shooter.

The soul of Call of Duty: Vanguard lies in the three main game modes, namely the Single player campaign, multiplayer and Zombies.

In the Vanguard campaign you will play as five ordinary soldiers who will become real heroes of the Second Word War. The story takes place on several fronts and presents the origins of the Special Forces and the founders of Task Force 1. The campaign offers a good variety of situations and is a great "warm-up" before trying your hand at the online content of the Sledgehammer Games shooter.

Call of Duty: Vanguard multiplayer is one of the richest and most varied in the franchise's history. With ben 20 maps available at launch, multiplayer offers players the chance to battle in classic modes such as Team Deathmatch, Kill Confirmed, Domination and more. There is no shortage of news, such as Patrol and Collina dei Campioni. The latter is basically a multi-arena survival tournament where teams battle to be the last team in play.

Featured playlists allow you to try your hand at a list of rotating modes that change every week. Alternatively Quick Match allows you to queue up in your favorite modes. Among the options, one of the novelties of Call of Duty: Vanguard is the Battle Rhythm, a setting that allows you to choose whether to play in games with a small or large number of players according to your preferences.

Finally, the new iteration of the Zombies mode could not be missing, in which four players must work together to survive hordes of increasingly dangerous brain-eaters from round to round. In "The beginning"You will have to fight Oberführer Wolfram Von List, a possessed Nazi who has managed to forge an alliance with a lord of the Dark Aether by obtaining the power to reanimate the dead. By gaining resources such as Essence, Materials and Sacrificial Hearts by fighting and completing objectives you can improve the your weapons at the Pack-a-Punch machines, build Armor and tools at the Workstation, and gain skills at the Altar of Covenants.

As mentioned above, Call of Duty: Vanguard multiplayer is one of the richest ever in content with over 20 maps available at launch, destined to increase in the future thanks to free updates. For example, before the start of Season 1, scheduled for early December, Shipment will arrive, a great classic in the history of the franchise.

The maps of Call of Duty: Vanguard are mostly inspired by combat scenarios of the Second World War and based on locations seen in the single player campaign, suitably revised to host clashes between numerous players. 4 are designed exclusively for Collina dei Campioni and Patruglia, or Airstrip, Train Yard, Cortyard and Market, while the remaining 16 are:

At launch Vanguard will offer eight multiplayer modes, including some notes to all Call of Duty players, namely:

In the future, additional modes will be added for free. Call of Duty: Vanguard, in fact, will be supported for many months through a series of updates that will add weapons, maps and modes. The cycles of updates will be marked by Seasons, with the premiere starting on December 2 for both Call of Duty: Vanguard and Warzone Pacific, Activision's free battle royale. For the moment, only the contents arriving before and during Season 1 have been revealed, of which you will find more information in our dedicated news.