It was back in October 2006 when in the land of the rising sun "Captain Tsubasa" appeared on PlayStation 2, the last of the console video games dedicated to the famous anime which in Italy is known as Holly and Benji.

14 years later, we can finally admire the return of Tsubasa and his companions on PlayStation 4, Nintendo Switch and PC with the review of Captain Tsubasa: Rise of New Champions, a title that is proposed as the football arcade that was missing for some time.

State of the art fan service

Rise of New Champions offers a story mode divided into two episodes: the first, Episode: Tsubasa, tells in detail the events of the second season of the new version of the anime aired from 2018 and which in Italy is still stuck at the first season. Tsubasa and his companions are ready to face the middle school tournament to win the much desired "V3", or the third victory in three years.

Episode: Tsubasa faithfully retraces the path of Nankatsu both on the pitch, with cut-scenes activated when the player performs a certain action, and off the pitch with scenes from the anime reproduced with the game engine.

The second episode, however, is titled "New Hero" and is set after the last middle school tournament but does not follow the canonical events of the anime. In this mode, the famous International Jr. Youth tournament in Paris has been canceled and taking the place of the French kermesse is a new competition held in America, the World Youth Challenge.

In this episode we will be called to create our alter-ego who will initially wear the jersey of one of the three clubs involved in the “New Hero League” tournament organized by the Japanese federation to choose the players to be called up for the national team in view of the new international challenge.

We will be able to choose the appearance and role of our personal player (Defender, Midfielder and Forward) before deciding which school team he will play in: Toho, Musashi or Furano. Once the New Hero League has been completed as winners, we will be called up to the national team to face the best international teams wearing the Japan shirt.

In this game mode our character will gain experience points and will be able to improve their statistics, but to learn the new special techniques it will be necessary to take advantage of the Friendship system. In fact, at the beginning of our adventure we will have the opportunity to select 5 player cards to which we want to be inspired by our style of play, in this way we will try to become their friends, train and learn the special techniques that characterize them.

We can get new friendship cards (and level up the ones we already have) by purchasing packs in the Edit mode shop with points that can only be obtained by playing. No micro-transactions.

The problem with the story mode, unfortunately, is the exaggerated amount of conversations, additional dialogues and cut-scenes at the limit of the banal that break the rhythm and terribly lengthen the times between one game and another. On some occasions, for example, it has happened that it took as long as 15 minutes to reach the character enhancement screen after finishing a match.

The gameplay of Rise of New Champions is quite woody and probably more complicated than one might expect, or at least in the beginning. If you dive headlong into friendly matches or even the story mode you will be overwhelmed by opponents who will continue to overwhelm you at every opportunity. Fortunately, we are met by a good tutorial mode that helps us understand the fundamentals of the gameplay and the more complicated aspect: dribbling and tackling.

To complete the dribbling, the game involves a system of stone, paper, scissors entrusted to the R1 and R2 keys: to overcome our opponent we will have to pay particular attention to his movements and act with R1 if the contrast performed is R2, and vice versa in the case of our opponent used R1 to counteract our attack attempt.

I can assure you that at first it will seem that the game does everything to make you lose the ball, but over time your eyes and your brain will begin to see the opponent's plays clearly and you will learn to face every situation. Some players, however, have very difficult to read animations and that will deceive you most of the time.

As far as dribbling and tackling are concerned, the power of a player does not count for much, even the most bench-top of all the benches will have the opportunity to stop the dribbling of the skilled Juan Diaz but as far as shots and super shots are concerned, it's a whole other story. .

The game of football involves throwing the ball into the opponent's goal to win, and in Rise of New Champions there are spectacular ways to do it. Everyone the shots and super shots characteristic of the series are present, reproduced in an exceptional way. We will be able to swoop the ball towards the goal with Tsubasa, or fold the hands of the goalkeeper with Hyuga, provided that the goalkeeper's defense is lowered first.

Shooting works with a stamina system, and to score we have to make sure that the goalkeeper's stamina is low enough that he can no longer resist the shot. It will take several shots loaded to the maximum before the goalkeeper lowers his defenses, especially at the beginning, where the players have not yet become strong and do not have all their skills at their disposal.

Stronger goalkeepers like Wakabayashi and Muller have a much higher stamina level, so it will be much easier to score a generic goalkeeper than a defense super star. However, as story mode progresses, some players will learn super shots that, with a slightly higher charge time, will be able to score even the strongest goalkeepers with full stamina on the first shot.

Special mention also for the special techniques that can be activated in flight: it is possible to take advantage of the crosses from the wing to activate spectacular head shots, overturns and also the fearsome Skylab Hurricane (infernal catapult) of the Tachibana twins.

Unfortunately, it is also necessary to report the presence of several bugs related to the gameplay, such as the freeze of the players in mid-air (quite harmless in the case of on-the-go players, but lethal in the case of the goalkeeper) or the sudden stop of dribling which forces them to lose. of ball possession, in addition to the lack of many translations regarding the skills of the players.

Developed by Tamsoft and published by Bandai Namco, Captain Tsubasa: Rise of New Champions marks the return of the famous anime to home consoles, after many years of absence and several titles only arrived on mobile. 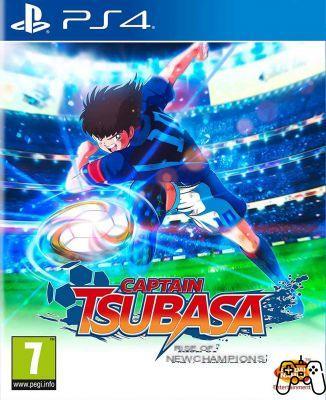 A dream team to conquer the online world

The Rise of New Champions online segment aims to be the most enduring, with players committed to taking their team to the top divisions. In fact, the game involves the creation of a custom team (emblem and jerseys included) to which all the players of the unlocked teams can be added, while respecting the score limit imposed by the division in which it is played.

In the first divisions it will be possible to use a team with a maximum power score of 1100, which translates into the presence of one, maximum two football stars, while the other players who will make up their team will inevitably have a lot of power. more contained than the giants. By getting promotion to the higher divisions it will be possible to gradually increase the level of your team.

The first two divisions also help players settle in and practice with their team by letting the player face only bots with predefined teams. After passing the first two divisions you will be able to challenge players from all over the world, with the possibility of matchmaking only with players with very good connections and a good level of sportsmanship (i.e. without penalty for rage-quit or other infractions of the rules. ).

Online gaming inevitably changes the gameplay, making it much more unpredictable. Having an opponent who can read our actions will make everything much more complicated, forcing us to use new tactics and all the skills available to our players. Unfortunately in our online test we found some lag that creates inconvenience and delays, probably the result of the player count still quite low (and therefore a matchmaking with very distant players) at the time in which we write this review.

Captain Tsubasa: Rise of New Champions is a game created especially for fans of Yoichi Takahashi's original work, but it limps a bit in the gameplay, which is often woody, not immediate and in absolute need of a bug cleaning.

Playing the Story mode means reliving the adventures of Tsubasa and his companions in every little detail, something truly unmissable for those who spent the afternoons waiting for the daily episode of Holly and Benji.

La Versus mode allows you to have fun even in company, perfect for spending some time having fun with friends with super shots. We just have to hope that the DLCs can enrich the gaming experience with new stories and maybe even new teams.

The animations are the flagship of the production, but the graphics sector does not shine with little detailed models and rather sparse environments.

The original Japanese dubbing of the anime is the only one present in the game, while the soundtrack is of exquisite workmanship, with the addition of some iconic songs that have marked the history of Captain Tsubasa.

The woodiness of the gameplay is undeniable. The "rock, paper, scissors" system linked to dribbling and tackling can be intimidating at first, but once you have learned the mechanisms it will give players great satisfaction. Unfortunately there are several bugs that undermine its full enjoyment.

Did you like the article? Share it!
Audio Video Captain Tsubasa: Rise of New Champions – La recensione
How to catch Eevee on December 2021 Community Day in Pokémon Go ❯