A family history. That's the point of Children of Morta, what separates it from the rest of the pixel art hack'n'slash roguelite crowding the market. Not just bloodshed and obsessive accumulation of boosts and buffs, but a journey into the life of the Bergsons of love, hate, denial, stubbornness and stubbornness. Don't expect the writing of Inception, but neither do you expect to pile up corpses without a purpose. Children of Morta seriously tries to unleash emotions in the player that go beyond anger, frustration or satisfaction in exploring a dungeon, catapulting us into a corrupt world that only the love of family can remedy.

If there was a TV in the Bergsons house, we might not have all these playable characters.

Let's take a step back. Children of Morta is a project of the independent team Dead Mage that after being launched in January 2015 on Kickstarter has had a few too many hitches slipping to date. The plot takes us on Mount Morta on which stands the warm and welcoming residence inhabited for many generations by family Bergson. Householder John and wife Mary live a peaceful existence with their four children (one more on the way) Linda, Kevin, Mark and Lucy as well as wise grandmother Margareth, cousin Joey and handyman Uncle Ben. The family quiet is upset by the appearance of the corruption, an evil that is devouring Death behind which lies an ancient threat that the Bergsons will have to face as guardians of the mountain.

From this premise arises the Bergsons' need to explore the Caeldippo, Barhaut and Terralava quarries, the three macro areas where the three mountain spirits reside that the family will have to free in order to eradicate the scourge of corruption.

Casa Bergsons is the gaming hub where we will be able to listen to the concerns of the characters, enhance skills and observe special events that anticipate plot lines. This progresses every time we return home, whether after successfully completing a dungeon or losing out. Going down into the depths of the house we will be able to select the level we want to play or replay, alone or in the company of a friend in co-op unfortunately only local.

Each family member embodies a very specific class and has their own skill tree. The gameplay is based on the fundamental combination left mouse button for primary attack (sword, fist or arrow) and right button for the secondary one, an ability that causes damage from the area. In addition to the two basic attacks, as you progress through the story and invest more experience points we will have access to a good variety of offensive and defensive skills. With the SHIFT key you activate the defensive ability of the character (shield, invisibility, shock wave that stuns the enemies) while with the CTRL key the fury is unleashed, a buff state in which for a few seconds the character increases base attack , critical and speed exponentially. The family dynamic is accentuated by the possibility of unlocking shared skills, such as a bonus at the beginning of the level or an extreme rescue in case of death.

At the beginning of each dungeon we are given the opportunity to choose which family member to play with among the six available:

So many different approaches make the gameplay incredibly varied from the beginning of the adventure without the need to unlock too many skills or having to catapult into excessive backtracking. The latter is especially useful for unlocking the universal skills that all members benefit from, as well as being fun to face a boss again with a different approach, accumulating riches in order to further enhance the party. Backtracking is also necessary in case of defeat of a character, who similarly to what happens with the diseases of Darkest Dungeon, will be sick for one or two turns receiving a health penalty making it necessary to have an alternative.

IN THE BELLY OF THE BEAST

A very varied and fearsome bestiary awaits you, let the hunt begin!

The three areas are characterized by their own fauna: the cave of Caeldippo they are common caves full of corrupt monstrosities such as bats, spiders, orcs and demonic goats; to Barhaut, the city of thieves, there is only sand and the ruins of what looks like a Middle Eastern city crowded with mummies, snakes and desert creatures; Terralava it looks like an advanced industrial city sunk deep in the mountain, now at the mercy of automated beings firing lasers from every orifice. At the end of each level there is a boss for a total of ten, ranging from bestiality like a huge spider or a Dark Souls-like goat demon to animal deities and robotic constructs to be faced in arenas generally full of traps and creatures.

Each dungeon has a huge amount of rooms inside that serve to introduce quest secondary e minigames, marked with blue or yellow doors. These pleasant diversions consist of escorting a family member or scholar to another room through enemy hordes, beating the gods in pong, or pressing buttons in the right order to unlock a reward, chase a bird, or save a puppy from attack by the corrupt creatures and whatnot.

Completing these optional areas gives access to a series of trinkets, merchants and buffs essential to get to the bottom of the dungeon: in addition to the potions healing enemies issue two types of currencies, i morv that is, the gold you need once you get back to the Bergsons home to improve the family's statistics, and the precious stones that are used inside the dungeons to open chests or pay the merchants who occasionally appear by selling or repairing amulets and divine objects.

Most useful during the heat of battle are the obelisks that assign a temporary bonus such as a constant explosion that accompanies us for a minute or a bonus to defense, attack or the drop rate; the rune who associate moves by other family members with primary or secondary attack but are perishable; the amulets which give lasting buffs such as increased speed or increased critical damage and finally the thank you and the divine relics which can be activated with the Q and E keys and can be unique abilities such as a totem that distracts enemies for a few seconds or a dragon that causes area damage, heal the character every few seconds, protect him at the point of death or materialize a droid that stun your opponents.

I played Children of Morta alone, despite the possibility of playing in local co-op, thanks to a review copy on my PC equipped with Sapphire RX580 8Gb at 144fps constant exploited thanks to the AOC C24G1 monitor. 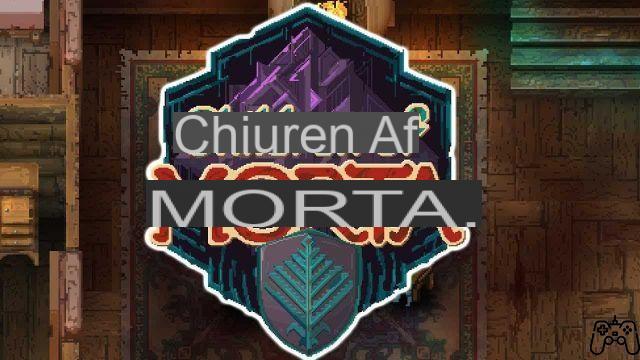 Children of Morta is not a simple game. Each character provides a different approach that has its pros and cons that must be kept in mind when facing the various types of enemies, allowing the player to always choose his favorite style without having to feel obliged to change characters except in case of necessity based on. to the boss at the end of the level, but if it is properly upgraded it is even possible to complete the game with only one Bergsons. It took me about seventeen hours to finish the adventure facing the ten bosses that go from the prologue to the epilogue, performing a slight backtracking. After the credits there is no new game and we will be able to replay the dungeons to fully upgrade each member and unlock other family traits or simply finish the remaining quests and look for the codex that explain the story of Morta.

Graphically if on the one hand the pixel art throws the game into the cauldron of countless productions with a similar style on the other hand the vibrant colors, the play of light and the truly evocative backdrops make everything very pleasant and spot on, lightening the game engine allowing us to enjoy the orgy of pixels of the most excited without worries. Good optimization work done by Dead Mage, during the whole run I never had frame drops (the first hours I spent playing at 60 FPS, shortly after a patch arrived that unlocked the frames by automatically adapting them to the refresh of the my monitor) or bug, apart from the only one that happened during the first boss fight that prevented this mega-spider from descending into the arena and remaining motionless without the possibility of hitting it.

The music is very atmospheric and is overwhelmed by the action too much, perhaps something more pressing could be dared, while the dubbing is limited to the narrative voice only which takes on tones very similar to what was heard in Darkest Dungeon, giving a lot of pathos to the movies.

WELCOME TO THE FAMILY

If Children of Morta can aspire to be one of the best hack'n'slash of this end 2019 only time will tell, but undoubtedly the work of Dead Mage is painstaking and the contents are there and are not boring. If an online co-op had been implemented, the prices of the title would have skyrocketed but even in single the game runs smoothly and never gets boring. It has taken many years and postponements to become part of the Bergsons family, but the end result is of excellent quality and the narrative effort is a nice addition that will surely please many players.

Il cost of 22 € is not excessive and aligns it with other similar productions more or less close in style and content such as Hyper Light Drifter, Dead Cells, Wizard of Legend or Hades from which it differs for the focus on the family on which gameplay and plot are grafted, making Children of Morta a I play with a personality of his own that does not taste trite and withdrawn.

Although pixel art is widely used in the world of indie software houses and especially in the various dungeon crawlers, Children of Morta manages to carve out its own space thanks to the vivid colors and sprites of well-made and quite imaginative enemies, never too repetitive. The Bergsons themselves are properly characterized and despite some clichés each have their own physiognomy that makes them clearly distinguishable from each other.

The dubbing of the narrator is good, the music a little anonymous.

An incredibly varied roguelite that offers six different approaches: shield and sword, bow, double dagger, war hammer, martial arts and pyromancy that combined with the peculiar moves of each class make each dungeon different and frenetic, with hordes of well-assorted enemies which require the variety of all styles, at least in the first hours of play. The presence of the co-op then makes it even more intriguing and guarantees even greater replayability.

Did you like the article? Share it!
Audio Video Children of Morta
Where to find all evolution stones in one place in Pokemon Sword and Shield ❯