Way back in 2012, a growing Swedish development studio was preparing to bring the Crusader Kings sequel to market. After eight years of honorable career, an impressive number of paid expansions and free updates, the Stockholm-based developer has decided to retire Crusader Kings II, following the great success of the Holy Fury expansion, and propose the new iteration of his dynastic simulator, going through the historical period that goes from Charlemagne and the sons of Ragnar Lothbrok up to the year of the fall of Constantinople.

Five months after its launch on the market, thanks to availability on Gamepass, millions of players have had the opportunity to confront for the first time with a strategic branded Paradox. A substantial difference is that in Crusader Kings III the player does not directly embody a nation or civilization, but plays its ruler until the end of his reign, be it by abdication or premature death, passing to the heir of his house, with the risk of losing titles taken with effort and sweat due to an unfavorable succession in favor of another family or of ending the game if one's dynasty remains without any title.

Till death do you part!

The management of one's family, and more broadly the house and dynasty are the nucleus around which the gaming experience is built, with small variations in this regard dictated by different religions or by the fact that one's own is a feudal kingdom or tribal. The Bloodlines seen in the previous iteration disappear to make way for the mechanics of the Legacies, a series of bonuses that are shared with the blood of our blood, no longer linked to the achievement of certain objectives or titles but unlockable by the leader of the dynasty by spending the fame that it is obtained thanks to a prolific offspring and by having one's family fill prestigious positions. The dynasty leader will be able to exploit the dominant position to disinherit family members and avoid bloody succession crises, ensure that the kingdom does not end up in the hands of an incapable heir or claim for himself titles belonging to relatives of an overly ambitious nature.

The choice of a half at the height of the ruler or the heir is important, with a notification in case it is possible to contract a marriage, or organize an engagement in the case of characters at an early age, already displaying the possible genetic traits and defects heritable from the descendants of the couple.

The prince, coup and lyon

Destiny is not already written in the genes of the character, the importance of education and a lifepath, already seen in the past, are now enriched and deepened, with the possibility of assigning a guardian at an early age and a tutor who will follow the future lord during his childhood, adjusting him character, attitudes and inclinations in terms of culture and religion. Upon reaching the age of majority, all characters with titles choose a lifepath to specialize in a certain area, unlocking unique interactions and actions. A martial approach to reign with an iron fist, one devoted to intrigue for a vassal eager to usurp the title of his lord, a skilled administrator capable of laying the solid foundations for a stable and thriving empire, or the study of texts sacred to justify wars against heretics and infidels.

Chaos is not a pit, chaos is a ladder!

One of the biggest news is the system of intrigue completely revisited with tons of new capabilities and options. We will no longer limit ourselves to eliminating rivals or uncomfortable members of our own house, but we will be able to cultivate the art of seduction, woo the daughter of the emperor of France, kidnap that bishop who refuses to pay the due taxes, find out or why no fabricating secrets to blackmail others thanks to the hook system.

The cape and arsenic are just some of the tools available, a strategic wedding or an invitation to court by an untitled suitor will provide you with the perfect casus belli to unleash knights, men-at-arms and militias on the map. The composition of the armies and the depth of the fighting has unfortunately been simplified in favor of a much simpler and more accessible system, based on three pillars: quality of armies, quantity of militias and advantages provided by the terrain and by generals. All the territories and buildings provide militias to which a retinue of men-at-arms must be added, similar to the retinue seen in the past, whose types follow a rock-paper-scissor pattern. Knights remain a scarce but precious resource, to be used with care given the ease with which they die and are injured in the event of defeat in battle, and because they are often your relatives or close friends, and their disappearance could add further stress to your alter. virtual ego.

Do you suffer from stress?

Stress is the second big news, this mechanic rewards those who choose to role-play, following along virtues and vices of the character, vice versa penalizing him with the development of compensation mechanisms that are more or less healthy for your character, or who is too unfortunate to be close to him. The development and growth of the realm is based on three pillars: domains, vassals, innovations. Investing in construction in directly controlled territories provides secure income and loyal militias, contracts with individual vassals can be modified down to the smallest detail by bartering taxes for greater loyalty or vice versa. The innovations, which replace technologies, are linked to their own cultural group and will not limit themselves to giving simple numerical bonuses, but will simplify the management of the kingdom, with new succession laws, paving the way for new diplomatic actions, or as von Clausewitz would say : what is war but the continuation of diplomacy by other means ?.

The game interface has been cleaned up and made intuitive and more accessible, the notifications system for new players he is a perfect co-pilot, highlighting all problems that require direct player intervention and immediately opening the relevant screen for their resolution. The missions given to the advisers now require a predefined time to be completed, depending on the skill of the advisor, giving the possibility to better plan their game without waiting for unnerving waits. For the graphic sector, it is finally possible to admire the characters in 3D, with the possibility of personalizing their clothing and hairstyles, while other distinctive visual traits are inherited or earned following illnesses or events that have left a mark, a mask to hide the consequences of leprosy or the scars left by a close encounter with a bear during a hunting trip.

The possibility of create your own alter ego thanks to the editor added after launch. The accompanying soundtrack was entrusted to Andreas Waldetoft and Philip Wareborn, and together with the sound effects of events and battles it helps the player to immerse themselves in the medieval setting, advising lovers of the genre to read the special on the subject.

The game was tested on a PC with the following specifications: AMD Ryzen 3600X processor, 32 GB DDR4 Corsair Vengeance GPU: NVIDIA GeForce GTX 2080 Super 8GB and 860 TB 1 QVO SSD. There were no problems or slowdowns whatsoever, the game is scalable enough to run even on older laptops without particularly demanding graphics. 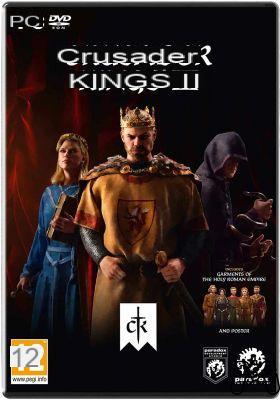 Like other Paradox titles, the ease of creating additional content by users has already made mods available that completely change the setting, with the possibility of finding oneself in the Seven Kingdoms, or in fantasy worlds ruled by sentient creatures and more. by men. Although Italian is not among the languages ​​supported by the game, the Italian translation of the TWR group, downloadable via the Steam Workshop. Crusader Kings III is a complete game, clearly if compared with the immense gallery of contents accumulated by its predecessor, the wealth of contents is less, but the novelties are profound and at the same time constitute an excellent basis for expanding the game offer. , what an affordable entry point for anyone wishing to enter this world for the first time.

The interface is pleasant and immediate, together with the game map with atmospheric and lighting effects to embellish the playing fields. The three-dimensional reconstruction of the characters is simple but effective, showing the evident signs of time elapsed without sudden shots, with a huge variety of profiles and customizations.

Paradox turned to their in-house team, with Waldetoft and Wareborn offering effective accompaniment and sound effects to grab the player's attention.

The most accessible of the Paradox games, both for its nature halfway between role-playing and high-strategy game. The news regarding the management system of the intrigues and the characterization of the character are welcome and the simplification of the other systems, in particular the military one, allow everyone to have fun right away.

add a comment of Crusader Kings 3: Game of Thrones review