Nowadays it is very difficult to find companies willing to take some risks for a triple A production, especially when it comes to new intellectual properties based on styles and mechanics outside the canons established by large commercial productions. Fortunately, there are exceptions, such as From Software, which with its Dark Souls, spiritual son of their previous Demon's Souls, managed to give to the public in the last generation a title in its own way revolutionary, capable of giving life to a new sub-genre, that of Souls like.

How? Simply "re-proposing an old concept but now forgotten by many modern developers, based on a "hard" and no frills gameplay, but precisely for this reason capable of giving so much satisfaction once mastered.
All within a genre, that of action RPGs, one of the most loved by players, "seasoned" by a fantasy setting with strong dark shades and from a particular narrative based also on images, on the description of the objects and on the interpretation of the players.

Seven years later From Software proposes it to us in a format adapted to the new consoles, Xbox One and PlayStation 4, as well as for PC (and later for Nintendo Switch), in an edition entitled Dark Souls:Remastered. A commercial operation, of course, but also a way to give many fans the opportunity to replay it more smoothly, and for others to do it for the first time if they missed it.

The game, directly or indirectly, everyone knows by now, unless they have lived on Mars for the past eight years. So it would probably be an exaggeration to be here vivisecting every aspect of it. In this review, therefore, although we will obviously describe the game, we will try to focus more on the new features offered by this remastered edition.

The title, let's say it right away, it's almost a clone of the original. Therefore the gameplay, the game situations and even many bugs are the same, identical of the PlayStation 3 and Xbox 360 editions. Laziness on the part of the developer in trying to offer a better product, or willingness to keep the work as it is. era?
From Software will cry to death that he did it for this reason, I am more inclined to believe that they wanted to take it easy. In any case, it is not said that, at least in terms of gameplay, leaving everything unchanged is a completely wrong choice, even if not entirely acceptable.

Fortunately the development team has fixed the frame rate issue, finally making it stable, at least to the eye, and fixed at sixty frames per second. In this way the title becomes more playable, especially in those areas, read The infamous city, where in the 2011 version there were frightening drops, to the point of making it even more difficult for the player to overcome the area and the enemies that populated it in large numbers.

The strength of Dark Souls lies in its gameplay and in its absolutely evocative background. Dark, fascinating and very difficult, but without ever giving the feeling of being unfair, it is an action-rpg that punishes the inattentive player, the one who always makes the same mistakes, who gets distracted or advances with his head down without a minimum of forethought or strategy. , while rewards those who have patience, who studies the paths, the stats, the power-ups, the behavioral routines of the enemies and even the bugs! Because the point is precisely this: once you learn the mechanics, the game does not become a walk, but not even that Hell that it may seem. Myself, after some trials in which I let myself be discouraged by the first difficulties, I started thinking and paying attention to what happens on the screen and in a short time I realized that the challenges were becoming less complex, tough to overcome but without wearing me down.

You have to experiment on your own skin, death after death, in such a way that every moment played can be used to obtain something important as a function of a new subsequent attempt.

Dark Souls: Remastered re-proposes the excellent online sector of the original version, including the famous Patti, but with some important innovations, such as the possibility of playing six at the same time, instead of four as in the past, both in PvP and in PvE and l 'use of dedicated servers and no longer peer-to-peer.
Which I think is very interesting, since this should make connections stable and minimize, if not completely eliminate, lag phenomena. Also interesting is the possibility of setting matchmaking locally or globally, the password system similar to that of Dark Souls III to facilitate the participation of friends online and, last but not least, a series of small but welcome changes, such as a halved Estus Flask number for invaders, and the inability to summon allies in quick succession.

At the beginning of the article I wrote that in terms of playability the game is practically the one released on PlayStation 3 and Xbox 360 in 2011. Well, the same is also true on a technical level. Apart from greater definition, some effects and an improved light and shadow system, in fact, everything is the same as in the past. These few tweaks they can't hide the "old" nature of the game, but only to make it slightly more pleasing to the eye on Xbox One. On the other hand, the title was not technically at the top at the time, with its largely flat textures and polygonal models certainly not up to par with other big titles.

Yet, now as then, in my opinion Dark Souls: Remastered asserts itself, in some ways, thanks to the excellent design of the creatures that populate the adventure, especially the bosses, and of the game areas, well characterized thanks to the excellent artistic talent of the From Software graphics, capable of giving us glimpses of magical and dreamlike tones.
Ruined or semi-destroyed structures that emerge from nowhere like skeletons of a now lost civilization; places full of atmosphere, sometimes beaten by a whipping wind, dark and decadent, with increasingly narrow and dark paths that often lead directly into the jaws of some monster. A real dark fantasy show.

I played Dark Souls: Remastered on Xbox One, having previously played and reviewed it on Xbox 360. 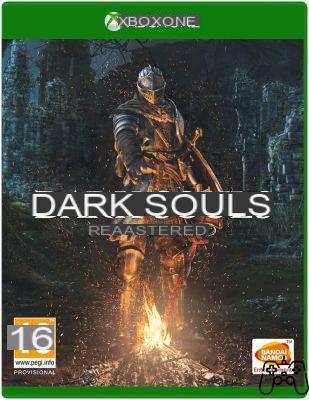 Dark Souls has brought back a type of experience characterized mainly by a punitive difficulty and clearly above average, which is the background of an incredibly multifaceted, rich and evocative game world. All elements that we find in this remastered edition, which however, apart from sixty frames per second, nothing really adds to the experience of the original. Strengthened by greater definition and fluidity, but very faithful to the original in all the rest, it could precisely for this reason arouse a certain disappointment and a lack of interest on the part of those who wished for a technologically better edition. For this reason, for those who have already played it, we recommend trying it, before buying it, while for those who have not yet done so and own an Xbox One, to turn a blind eye to the graphics, and recover it to fill the gap.

The remastering work was decent, but it could have been done much better on a technical level, perhaps by improving textures and some polygonal models. Too saturated colors. Nice effects and lighting system. Always fascinating design of places and enemies.

Such a game does not require who knows what music or what effects: all in the norm and in keeping with the gloomy atmosphere of the game. Good dubbing in English.

Smooth controls thanks to 60 frames per second, woody combat system, well implemented RPG and open-world mechanics, addictive challenge level that still holds up after so many years, some wonderful boss fights.

Did you like the article? Share it!
Audio Video Dark Souls: Remastered
How to get Dada Zarude and Shiny Celebi in Pokémon Sword and Shield ❯