Darksiders is one of the group of games that I always think back to with pleasure. Released in 2010, the title developed by Vigil Games it struck me above all for his setting, thanks to which what was at the time a new intellectual property seemed to be able to have the road paved towards a rosy future. As life sometimes teaches us, however, deserving something does not necessarily mean being able to obtain it, and due to the vicissitudes faced by the Austin-based team linked to the fate of THQ, the continuation of the story that tells the story of Guerra and his companions was long questioned.

Without going over here all the phases that led to the formation of Gunfire Games e THQ Nordic, the important thing is that someone has decided to continue to focus on Darksiders, putting together part of the old studio to bring us straight to the review of Darksiders 3. Recently arrived on PC, PlayStation 4 and Xbox One, it is a production that for obvious reasons is less high-sounding than the previous ones, but still worthy of consideration by those who in recent years have loved the first two Darksiders. The inspiration behind the setting makes the charm of Angels, Demons and Knights unchanged after eight years.

The story of Darksiders 3 takes place during that of the first chapter, starting in the moment in which War he is captured and put in chains by the Arso Consiglio which accuses him of having unleashed prematurely the Apocalypse. The fiery-breathed trio then summons Furia, instructing her to stop the Seven Deadly Sins made free to go back and forth on Earth, thus further complicating the lives of the few humans left after the war unleashed between Angels and Demons.

Before leaving, Furia is warned by the War itself of a deception carried out by unknown forces, but decides nevertheless to get to work for the Arso Consiglio, obtaining from the latter the promise to become the guide of the Knights of the Apocalypse. Accompanied by the inevitable SentinelThus begins the journey that will lead her to meet new and old characters from the Darksiders series, such as the Vulgrim demon to which to entrust the souls gathered along the way to level up.

Overall, the plot manages to be followed quite well even by those who have not completed the previous chapters, although to grasp some references it is obviously necessary to have already played in the company of War and Death. Even without shining in her narrative aspect, Darksiders 3 still manages to say the word about her, also thanks to the newcomer Fury who presents herself with a handsome tough character, resulting in the initial stages even unpleasant for her way of reacting to situations. Continuing in Darksiders 3 it is still possible to appreciate the new protagonist, identifying some changes in her and ultimately embracing her cause in the run-up to the Seven Sins.

Precisely the latter are probably the best expression in Darksiders 3 of that inspiration we talked about previously: the reinterpretation given by Gunfire Games to figures such as Sloth, Avarice and Superbia (the strongest of sins) alone deserves the price of the ticket, allowing the player to appreciate the nuances thanks to a dubbing in Italian that stands at more than good levels.

Anyone who has played the previous chapters of the Darksiders series knows that even between them there were some differences in the game mechanics. Darksiders 3 changes the videogame reference point again, taking the path traced in recent years by the so-called "souls-like" with their own philosophy. Those who start playing in the role of Fury must therefore know that they are faced with a type of game well disposed towards the punishment of errors that are made, presenting in some situations a difficulty higher than normal. It is therefore necessary to constantly pay attention to the amount of life points that remain in the battles, while making sure to have at hand the consumables that allow you to recover health.

In fact, there are enemies capable of taking away more than half of the bar containing the life points of Fury with a single shot, therefore also making it necessary to carefully plan one's attacks especially when facing an area particularly populated by creatures. Continuing with the analogies with Dark Souls and similar, once dead all the souls collected up to that moment are lost: they can be collected by returning to the point where we were defeated, facing however the respawn of all the creatures that were on our previous path.

Starting from the whip, the protagonist's weapons increase with the arrival of new powers, thus giving the player the possibility to choose between different solutions to face the opponents. The difficulty mentioned above makes it rather difficult to get bored in battles with minor creatures, up to the boss battles with a fairly good, but not excellent, average level. Instead, the platform phases are less inspired of the game: the control system reveals its woodiness, therefore making it necessary to be extremely precise in making jumps or performing other movements that require particular attention.

The game map allows you to move with a certain freedom between the various areas, containing different enemies. With some exceptions dictated by the needs of the plot, even Deadly Sins can be tackled in no particular order, thus giving the player the freedom to explore the areas at will. In the absence of a real map, the only guide we have is a sign that indicates the closest Capital Sin, thus choosing whether to follow this suggestion or wander around in search of different solutions. To move quickly we find Vulgrim and his Serpentine Riftings, thanks to which Furia can teleport from one area to another.

I played Darksiders 3 on PlayStation 4 Pro. 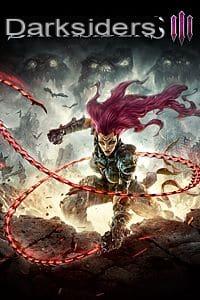 Darksiders 3 turns out to be a title of good workmanship, with some defects which however do not affect the general quality. The interesting story told by Gunfire Games therefore deserves to be experienced by fans of the series, also allowing me to recommend the recovery of all three chapters to those who have not yet had the pleasure of meeting the Knights of the Apocalypse. The hope is that in this way the intellectual property can recover the ancient ambitions, thus leading us to play a possible Darksiders 4 even more beautiful.

The inspired setting of Darksiders 3 does not find complete comfort in the technical sector of the game, the detail of which is presented below the main modern productions. This does not prevent the effort of Gunfire Games from impressing with some particularly suggestive views, alternating with moments in which we find ourselves moving our steps through corridors that are rather anonymous. It should be noted the presence of frequent uploads, linked to the loading of the map between one area and another, and some drop in the number of frames per second. Considering that I used a PlayStation 4 Pro for my test, I wouldn't be surprised to see worse performance on the base edition of the console.

Characters dubbed completely in Italian and well characterized by the people who have lent their voices to the work, with particular attention to the ways of speaking of the Seven Deadly Sins.

The influence of the souls-like dynamics could make Darksiders 3 particularly difficult for those who do not arrive prepared to face the game in a certain way. In fact, the level of difficulty proves to be high right from the start: it is good to know this before evaluating the purchase. Some burrs in the sections where the platform component is higher, dictated by the woodiness of the controls.

Did you like the article? Share it!
Audio Video Darksiders 3: the review
The Super Swing Golf Solution ❯