My relationship with the Quantic Dream titles has been like a roller coaster ride: ups and downs, exaltation and annoyance at the sometimes untapped potential.
I must also do a mea culpa, that of being TOO generous with Beyond: Two Souls, forgiving those boring sections and the bizarre ending to say the least.

Having made these necessary premises, I have always appreciated the great cinematic attention paid to the narration, photography and soundtrack; important aspects like the gameplay especially in the productions that leverage these aspects.
In this regard, if you do not fully know the pedigree of the French developer, I invite you to read the first and second part of our dedicated monograph.

In reality, productions such as The Last of Us have made me understand that you can create a great narrative system without particularly sacrificing the gameplay.
The path traced by Quantic Dream takes different tracks, those of giving the player the opportunity to shape their own story within well-defined boundaries. A noble goal, but the result of more or less elegant compromises that can still produce an effective result: Detroit: Become Human falls into this category.

With the latest title by David Cage, in fact, the sublimation of this "school of thought" was probably reached, especially as regards the ideas applied to the script and gameplay, well rooted in the developer's mind.

Sublimation which also represents a limit, however, as I will have the opportunity to tell you in the course of the review.

There are as many books, films and other mediums dedicated to the android imagination as you like; in the course of our interview David Cage stated that he particularly appreciated Raymond Kurzweil's “Singularity is near”, an essay that photographs the moment when machines become smarter than humanity itself.
But the iconic French developer has also specified that he has built a personal vision of such events, which are the background to the possibilities placed in the player's hands.

The ideal theater city could only be Detroit, in an alternative future to the one that really lies ahead, dated 2038.
Small personal digression, among the many predictions about the future of the world, the one that foresees the presence of androids seems to me quite plausible, but not so close in time: probably our generation will pass away much sooner, so #checenefotte.

In the metropolis of Michigan, however, there is the largest production of humanoid sentient machines, used for different purposes and able to process a quantity of data unthinkable for our mind.
But like any self-respecting software, there is no shortage of bugs or "backdoors" - plans B - instilled by the creators for every eventuality and purpose, be it noble or not.
The system instabilities have led to the formation of the so-called deviants, androids who have matured their own conscience or presumed such, to the point of manifesting feelings such as ambition, disagreement, fear, the will to simply be free.

No, I haven't seen any blue screens of death.

The struggle for emancipation is experienced through three well-defined points of view, flanked by multiple nuances that reflect on the aesthetics of the American city and on the relationships with the other characters.

First of all Markus, who finds himself having a leading role in conveying this feeling of emancipation; Connor, an android detective who investigates precisely the state of deviance; Kara, who shows clear signs of empathy towards the child she is assigned to, to the point of wanting to live a free and independent life.
The latter, the protagonist of the short dated 2013 and shown during the GDC in San Francisco - I was there! - represents one of the first models produced by Cyberlife, the leading company in the production of androids.

In Detroit: Become Human we start with a chapter dedicated to each of the three protagonists, who will not fail to cross their paths also based on the choices made by the player.

The game structure is not very dissimilar to that of Heavy Rain, only now the narrative is heading towards a larger scale; there is also better fluidity during quick time interactive sequences, also because most of those typical superfluous operations that we saw in Heavy Rain have been eliminated. To understand, the scene in which Kara serves Alice and her father to eat, having to clean the dishes etc, has the purpose of introducing the events that govern the deviance of the AX 400 model android.

The action sequences, finally, are perfect for a “static” type of gameplay, enjoying a more consistent key pressure with what happens on the screen and in general being more engaging.

Important decisions must be made in a limited amount of time, they can affect the fate of the protagonists and their relationship with key figures in the story. This relationship can improve or deteriorate, unlocking additional paths or situations in which additional help can be fundamental: trivially if you have saved a character or become friends with him, he could intervene by helping you or sacrificing himself for you, on the occasion of "wrong" choices. or failure of action sequences.
Up to the macro decisions related to multiple endings: all the questions will be solved except one, about which you will have to work with imagination, also leaving a scenario for a possible - absolutely not confirmed! - following.

I am an ambassador for a possible question: is it possible to reach a duration of the adventure even halved in the event that you were to play "badly", skipping steps or sacrificing the protagonists?

The answer - as expected - is “no”, since some narrative devices sometimes too didactic come to the rescue. Clearly you can skip entire chapters and still others are mutually exclusive in relation to the choices made, but as I said at the beginning of the post there are well-defined boundaries within which to move freely.

In this regard, the interface proposed by Quantic Dream is excellent: at the end of each chapter the character who faced it is shown and a diagram with the path taken - in detail - together with the other branches and "extras". It is therefore allowed to restart the chapter from various checkpoints in order to try different paths, with the possibility of choosing whether to save the progress, and then modify the continuation, or simply explore different events.

Once you have shaped your story, therefore, it is very easy to wriggle between the chapters to experiment with alternative paths.

My first "run" with the game lasted about eleven hours, then I delighted in replaying some passages to dissolve further doubts about the plot, until I experimented different destinies for each of the three protagonists.

Going back to the sublimation set out at the beginning of the article, Detroit: Become Human is a good game, especially when it tells the stories of its characters in an intimate, personal way, able to involve and thrill within chapters that excel in script and storytelling. When the plot takes a breather and extends to the whole city of Detroit, it is easier to understand what happens based on the choices, up to predictable and therefore trivial events.

In short, David Cage dared little from the point of view of writing, on the altar of wanting to make every branch of the story coherent and with the result of frustrating, in part, a script so well built in its foundations.

We are not at Farenheit's levels of "madness" nor do we have particular script holes like in that specific moment of Heavy Rain; Detroit exudes quality for large stretches, without however touching peaks of excellence when it should become grandiose and "scale" together with the nature of the plot itself.

I realize that it is difficult to make you understand what I mean without giving specific examples and therefore spoilers, but it is not my intention to ruin the experience for those who want to play the title, we will have the opportunity to talk about it in the second place through Povery's direct and Late Show.

Little to say, however, about the technological system, in some ways really impressive.

The acting of the actors using motion capture is often exceptional, in addition to the rendering of the skin and tissues. And then the photography, the depth of the camera and the camera offer glimpses with a truly impressive realism, in a Detroit masterfully reproduced according to the vision of the developers, without too many fancy flights beyond those on the androids themselves.
The icing on the cake, as is now customary, is the use of HDR to enhance the lighting system.

Even the animations and transitions are better amalgamated with each other, net of when you deliberately play "out of time"; I appreciated that mix resulting from technical and artistic work able to increase empathy towards the protagonists and their facial expressions: their eyes are alive, expressive, much more than in previous Quantic Dream productions.

The soundtrack represents another strong point, among other things calibrated in a different way for Markus, Connor and Kara: songs of excellent quality adapt to what is shown on screen, enhancing the topical moments and setting aside for the emotional ones; on the other hand since Heavy Rain I have recognized a soundtrack of great value.

Finally, Italian dubbing enjoys ups and downs. The acting is ok, including the tone; not always, however, the dialogues connect adequately with each other following a choice, marking the most marked difference compared to a grandiose original dubbing also because it is the prerogative of the same actors who gave the appearance to the characters. To fully enjoy this part it would be advisable to play it in English and at the most with Italian subtitles, but I am not offended if you want to play it entirely in the language of the Bel Paese.

I played Detroit: Become Human on PlayStation 4 Pro, obviously ending the game and then dabbling in alternate choices and endings, as well as consulting extra material. In addition, I ate 4 pizzas and drank an average of 3 coffees a day. 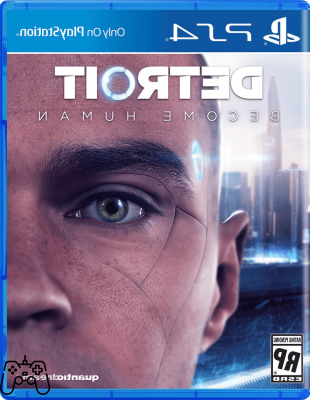 Detroit: Become Human lacks a bit of that soul constantly sought after by its protagonists, remaining in any case a beautiful experience, technically great, which does not present particular smudges or qualitative drops as happened with other titles of the French developer. Above all he lacks in writing, dares little in the final stages, but remains perhaps the best representation of this way of understanding video games.

Motion capture at the highest levels, better fluidity regarding the transition of animations, in general great use of photographic tools to make the impact with the game more cinematic.

Fine and well diversified soundtrack, Italian dubbing ok without the peaks of the Anglo-Saxon one.

More diversified and fluid quicktime sequences during the action moments, the didactic writing partially nullifies the excellent script and the chapters of the first 2/3 of the game.