Even as the life cycle of PlayStation 4 and PlayStation VR draws to a close, it cannot be said that Sony has let go of support for the virtual reality headset. Among the many arrivals of recent times we can also count that of Everybody's Golf VR, version of the famous golf series designed specifically for the game with the use of the helmet of the Japanese company.

As has been the case for twenty years now, Everybody's Golf VR has been created Clap Hanz, development team that has become historic for the series starting from its second chapter dated 1999. Since then, obviously a lot of water has passed under the bridge, and the arrival on virtual reality is certainly not a trivial thing: if you have played at Everybody's Golf for PlayStation 4 you will partially find the style, but in terms of game mechanics the transition to VR is felt. For sure for the most part in the good, but in a small part unfortunately also in the bad.

The most noticeable difference of Everybody's Golf VR to its predecessor lies in the control system. Clap Hanz has in fact studied a series of ad hoc dynamics for PlayStation Move, taking advantage of the very shape of the controller to design the game. Even looking at it, the Move is reminiscent of the grip of a club, thus making entry into virtual reality a practically obligatory step. Try to see the iron you are using as an extension of the peripheral, and you will almost completely understand how Everybody's Golf VR works.

The PlayStation Move is used as if it were a real club, wonderful with the final result especially as regards the precision. Being always fully in front of your PlayStation Camera and never to the side, the risk of going out of the range of the camera is really reduced, thus helping a full tracking of the movements made with the controller. To play Everybody's Golf VR while fully enjoying it, it's good to have some extra space in the room. While on the one hand it is true that it is not necessary to carry out all the movement as in reality to hit the ball, on the other the charm of screaming SPA-GHET-TI while putting the ball into the hole with a textbook swing is something that is hard to resist.

In case you do not have a PlayStation Move available to play it is actually possible to do it with a normal one DualShock 4, but the final yield is obviously not the same. Similar speech for the seated game, selectable in the options instead of the standing one, to be preferred without delay if you have the possibility.

To hit the ball, the previously known power bar system no longer exists: it all depends on the strength of the movement, but above all on the type of impact between the virtual club and the small ball. To get a little familiar with the game Everybody's Golf VR provides a training mode regarding the various phases, however also allowing during the matches the possibility of taking some test shots.

Before moving on to the real swing it is in fact possible to perform a few attempts, to get an idea of ​​where the ball will end up with the movement we are performing. Through one of the buttons of the Move it is possible to quickly switch to the actual shooting mode, with which to really hit the ball.

The aspect in which Everybody's Golf VR lacks the most is that related to content. Compared to the version previously seen on PlayStation 4, Clap Hanz has in fact completely cut the online component of the game, also reducing the number of available fields to three. The games can initially be played on up to three holes, then going up with the number once we have leveled up through a bit of healthy grinding. 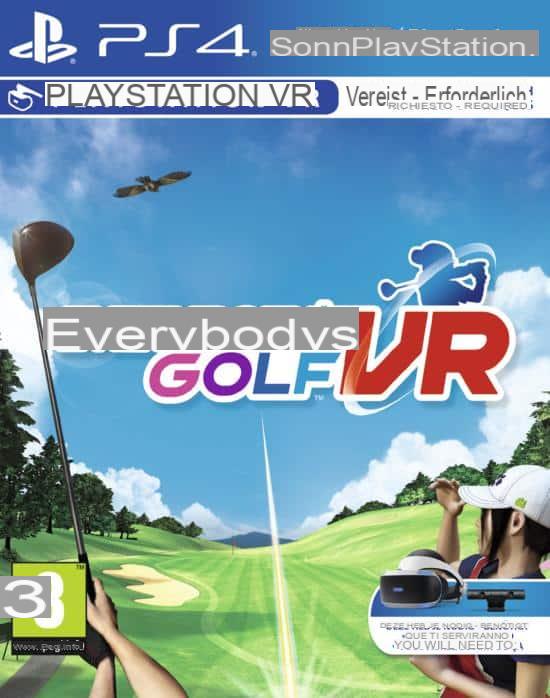 Concluding this review of Everybody's Golf VR we can say that Clap Hanz has undoubtedly hit the mark. If the primary objective was to entertain the player by offering him something different than the other releases of Everybody's Golf, the VR version of the game does not just do its homework, proposing itself as a simulation to all effects.

Looking at the ball, swinging and turning in the direction of the shot to see where it ends up has a magnetizing effect, able to attract the player to long sessions in the company of Everybody's Golf VR. However, the few contents limit longevity at the moment when the magic effect fades. If you love this sport and own PlayStation VR, this is an almost obligatory purchase.

Within the limits of virtual reality, Everybody's Golf VR cuts a fine figure. The interface is also well thought out, comprehensive and intuitive even with the use of a single PlayStation Move.

Nothing in particular to report, for better or for worse. The made in Japan nature of the game is undoubtedly felt.

The first time you grab your club to swing, Everybody's Golf VR turns out to be an unmissable experience. After some time, however, the lack of extra content begins to make itself felt.

Did you like the article? Share it!
Audio Video Everybody's Golf VR, golf is everyone's virtual reality
The best Pokémon games for mobile devices for Android and iOS ❯