Final Fantasy XV has heavily divided critics and audiences, creating over time two opposing sides between those who found it still beautiful, and those who instead heavily rejected it, considering it too "different" from the traditional canons of the series. In all cases, it is undeniable that the title of Square Enix marked an epochal turning point for the saga, how positive or negative only time will tell. Meanwhile the Japanese company proposes it in a new edition called Final Fantasy XV Royal Edition, which contains all packs included in the Season Pass, plus other unpublished elements.

Final Fantasy XV Royal Edition tells a beautiful story that cleverly combines fantasy and sci-fi elements "in oriental sauce", and does so through a series of events and cinematic sequences that alternate with all those elements typical of an action role-playing game, namely the exploratory phases , mini games, puzzles and fights.
On the eve of his wedding with the beautiful Lunafreya, Prince Noctis leaves with his faithful friends Prompto, Ignis and Gladiolus for a sort of "hangover". Their intention is in fact to spend a last period of his life as a bachelor. But things do not go as they imagined: the Nifhleim Empire attacks the kingdom of Lucis, kills the sovereign, as well as Noctis' father, and occupies the capital. All that remains for the prince is to take on his new responsibilities as a designated successor to the throne and fight to free his subjects from tyranny.

Final Fantasy XV is divided into two distinct portions of the game, one large and vaguely open world, the other, after a certain chapter, more linear.
In the first case the game offers large areas of the world of Eos to explore on foot, riding a Chocobo or using a car which, thanks also to an extra content of this edition, can be transformed to be able to guide it in every corner of the game world.
In the second, a series of scenarios that follow one another and alternate with filmed sequences and fights. These are based on a real-time battle system based on action, complete with typical third-person shooter elements and modern hack'and slash elements. Noctis can move on the field by attacking, dodging and casting spells using the joypad keys and possibly calling up the related menus on the fly to use objects or perform more complicated actions. Additionally, he can teleport around the battlefield.

The controls are quite responsive, the animations fluid and you have good control of the action and dodging, although sometimes the camera is not well positioned and creates some problems. In general, the fights are spectacular and take place without interruptions whatsoever even vertically, inside and outside buildings, on roofs or suspended in the void.

Despite the clearly action footprint, the game does not neglect some of the typical elements of an RPG, such as the management and enhancement of weapons, skills and spells, traditionally linked to experience points, special objects and the increase of character level, Summon invocations and so on.
Strategy also plays an important role, given the influence exerted by the place where the clashes take place and the friends present in support of the protagonist. Noctis can in fact exploit the elements of the scenario to his advantage to inflict greater damage on enemies or to seek shelter from their attacks, while interacting with companions, who act automatically according to the orders pre-set by the gamer, can create special combos that are linked to the weapons supplied and the unique abilities of each character, and they are more effective depending on the agreement reached with the other party member with whom they are performed. If desired, there is even a usable tactical pause to manage the action almost in the old way.

At the level of mechanics this Final Fantasy remains a kind of hybrid between old and new, perhaps imperfect, but not ugly: it has a “different” style from the usual one, in short, but that doesn't mean it should be thrown away.

La Royal Edition is the most complete version of the game, and offers practically all the contents published with the various updates, such as the alternative route of chapter 13 or the possibility of changing characters, to which are added those released with the season pass, that is the Battle Companions expansion, which adds the online multiplayer, and the various Episode Gladio, Episode Prompto and Episode Ignis.
Multiplayer is a mode that offers a Monster Hunter-like experience, but much more simplified, with a fun combat system, few general options and too long loading.
The episodes dedicated to the companions of Noctis instead, they allow them to play their role in specific game sessions, e add new elements to the main campaign covering some holes in the texture compared to the original.

To complete the offer there are other elements, this time unpublished, among which we point out the option to use a subjective view, the Supreme Panoply action, a new final area called the Ruins of Insomnia, which in addition to allowing us to face the ancient rulers, contains new missions and enemies such as Cerberus and Omega, and complete control of the Royal Yacht with the possibility of exploring the waters between Capo Caem and Altissia, fishing aboard the boat and discovering new fish and new recipes.

With regard to the technical part, the work makes use of the power of YEBIS 2, a middleware capable of simultaneously managing and processing several visual effects such as motion blur, anti-aliasing and color correction, and to generate particularly brilliant graphics, with images. clear, human and humanoid figures animated in a masterly way and making the most of what have always been two of the spearheads of Square Enix productions, that is, the attention to detail and character design.

The game world is not exactly "open" but is still large, detailed and made alive by the creatures that populate it, by the day-night cycle and by the changing climatic conditions in real time.

Important phenomena also for the purposes of the actual gameplay, since they regulate the life of the inhabitants of the areas visited, with the whole series of secondary missions available only at certain times of the day. The whole comes corroborated by an excellent sound sector, which can count on a good dubbing in English and valid sound effects that largely recall those of the tradition of the Square Enix saga, but above all on a splendid soundtrack, capable of adequately accompanying every moment from the adventure, from the slower ones and carefree, at the most dramatic stages, in a crescendo that finds its sublimation during battles, especially against the most gigantic creatures.
Personally I really appreciated the work done by Yoko Shimomura, who among his sources of inspiration always cites the great masters of classical music such as Beethoven, Chopin and Ravel (and it shows!), and from the other composers who contributed to forming the "musical base" of the game, such as Keiichi Okabe with the beautiful Shield of the King e Battle on the Big Bridge, rearrangement of an old song by Nobuo Uematsu da Final Fantasy V for the DLC dedicated to Gladio. 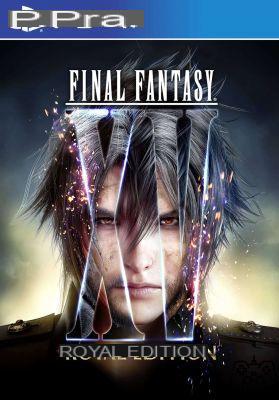 Royal Edition is what probably should have been the original Final Fantasy XV. This version, in fact, not only adds a handful of bonus content, but material that has its weight in the economy of the game, making it actually better and more complete. For the rest it is a title able to fully satisfy the player both from the point of view of the gameplay and from the technical one, whose only flaw is probably the name of the brand itself, which ends up negatively affecting the judgments of a certain slice. of users unwilling to change and predisposed to continuous comparisons with the old cornerstones of the saga.

Really very beautiful, full of details and with fascinating settings corroborated by the usual artistic cut that characterizes the works of Square Enix.

The music is among the best to appear in the saga, perfect to accompany every single moment of the adventure. Good dubbing in English.

Modern and real-time battle-system but more tactical than it may initially appear, effective control system, camera to be improved, secondary missions in the long run repetitive.

Did you like the article? Share it!
Audio Video Final Fantasy XV Royal Edition
How to get Sawk and the best Movesets in Pokémon GO ❯