The Fortnite Chapter 2 Season 5 map has now been revealed. Thanks to leaks and dataminers, players can get a preview of the new map changes and named locations implemented by the new season patch. From the Salty Towers (a reference to the Tilted Towers, perhaps) to the Colossal Coliseum, players will find points of interest old and new to explore. 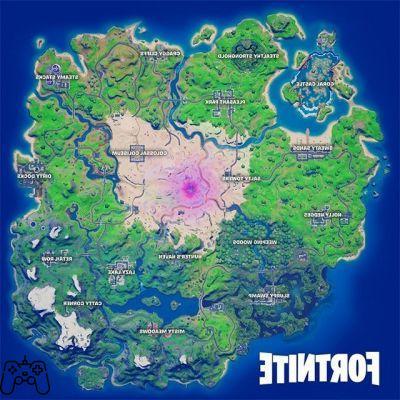 Fortnite's new Season 5 map for Chapter 2 has old locations like Pleasant Park, Lazy Lake, and Retail Row. It also has new areas like Colossal Coliseum and Hunter's Haven. Areas like Salty Towers take two fan favorite locations and combine them. There are a total of 17 new named locations for players to explore. These will undoubtedly be present in the various missions and challenges for the new season.

As Chapter 5 Season 2 evolves with new updates every week or so, players can expect the map to go through a few minor changes. So once the season is over, a huge event will likely happen that will bring about significant map changes for Season 6. This is the usual Fortnite cycle for map changes, and it has worked well for Epic Games so far!

Fortnite's new patch has done more than just update the map. With new weapons, gadgets, skins, and more, Chapter 5 Season 2 promises to be one of the biggest seasons yet. Retrieve the patch notes here.

Wondering how to unlock the Fortnite anime skin? Well, ask yourself no more, as this guide reveals exactly how to get the Lexa dress.

Curious about the shapeshifter who can turn into a harpy? Here's what you need to know about Maeve.

Fortnite Gold Shotgun Location Where to find the legendary sniper

When is the start time for the Fortnite Rocket League event?

Money spent on Fortnite tracker | Can you see how much players are spending?

Fortnite Kratos Skin | Will there be a crossover between Fortnite and God of War?