I have a problem. No, that's not true, I have a lot of them. One in particular, though, perfectly describes my experience with Gato Roboto, Metroidvania-style 2D pixel-art game developed by Doinksoft has become part of the increasingly surprising catalog of Devolver Digital.

You know when you open a package of gummy candies? Your mind tells you to take it easy, enjoy them one at a time. Instead, turn anxiously around that package and, once you have swallowed the first handful of cocacoline, take another, then another. Up to finish in the blink of an eye all the chewy nectar that the package offered. Come on, don't tell me it just happens to me!

Searching for the next rescue station will be tantamount to saying: "One more candy and then I'll put the package away!"

In any case, Gato Roboto offers the same experience: a concentrate of fun which, right away, you cannot do without. You want to keep playing, facing the game with a seemingly unwarranted frenzy.
Searching for the next rescue station will be tantamount to saying: “One more candy and then I'll put the package away!”.
Also because alas, even in the duration Gato Roboto can be combined with a packet of candies. In fact, it will take about three / four hours to complete the game. The data is slightly variable, it may differ by a few tens of minutes based on your sense of direction or the desire to complete it 100% on the first play. The fact remains that it will be difficult to break through the wall of 4 hours of play.

Incredibly, this feature (usually associated with a negative aspect) does not in any way undermine the quality of the adventure: in the few hours of play you are catapulted into a complete and satisfying experience, in which a nice and pleasantly articulated story is also told. and we face a series of always varied and stimulating situations, maintaining a frenetic but pleasant pace.

He thinks about triggering the events that start our adventure Kiki, the kitten fond of mecha protagonist of the game, Gary.
After receiving a distress call from a mysterious research station, Kiki's pilot / owner decides to investigate, but Kiki's feline curiosity drives her, as usual cats, to jump on the control keyboard. Instead of typing random letters, as happens to anyone with a cat at home, the keyboard swipe causes the ship to crash right over the aforementioned research base. Unable to move, the ship's captain entrusts Kiki with the task of finding a way to leave and, in the meantime, find out what happened at that base. 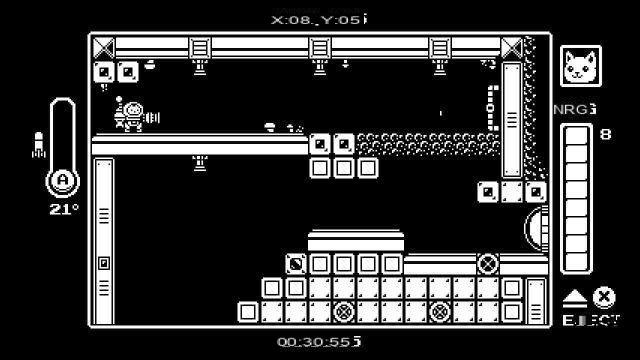 In a few hours of play, you are catapulted into a complete and satisfying experience

Like any self-respecting Metroidvania, the labyrinthine structure of the map is an essential element for the success of the game. Although with few areas available, exploration is the basis of the event and the available microzones are well structured, evolving in terms of exploration possibilities depending on our equipment. As per the tradition of the genre, in fact, the Mecha led by Kiki will have a series of upgrades available that will allow us to gradually unlock new paths and new areas. In addition to the classic enhancements dedicated to exploration, in the most remote rooms of the station, there are also energy slots and reward cassettes with a dual function: to change the color palette and enhance the primary weapon of the robot.

I played Gato Roboto on Switch, using it almost exclusively in portable mode. 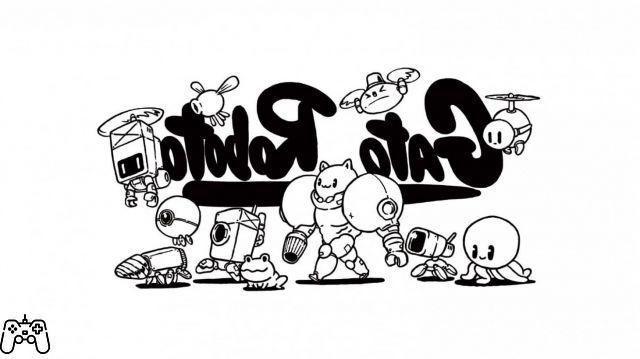 Among alien frogs, defense robots, strange plants and frantic battles with Bosses, even the action component does not leave disappointed. Putting aside the latest titles of the genre, which tended to be particularly challenging in this sense (see Hollow Knight), in Gato Roboto we return to a more than adequate level of difficulty. Some Bosses will be more challenging than others, but there will never be a really frustrating or depressing fight. It will all be in understanding the moments in which it will be possible to hit the enemy and when, instead, to avoid his attacks.

When you are not busy blowing up obstacles of any kind and annihilating the enemies, the exploration through the narrow corridors will also be entrusted only to the skills of Kiki, going to operate bridges, structures or switches, even without the war capacity of the robot. .
In this phase you can see how the game has been programmed in an impeccable way, the reaction to the pressure of the keys and the precision of the jumps give feelings of total control. Even in the most extreme situations and on board the mecha the control system does not miss a beat, allowing you to dance on the keys and transforming the dance steps of your fingers into on-screen actions with more than enviable precision. Jump, turn, shoot and land. You will never find yourself landing anywhere other than where you intended to land. Really amazing. 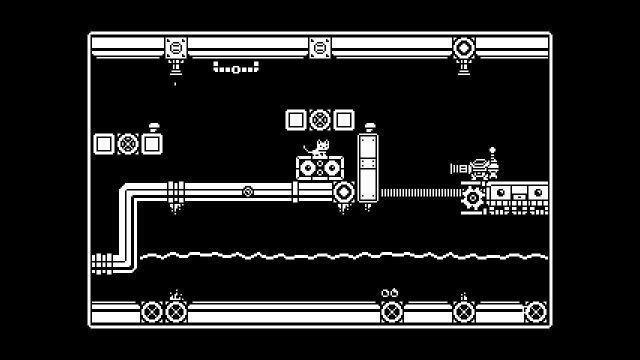 Among alien frogs, defense robots, strange plants and frantic boss battles, even the action component does not leave disappointed

Although pixel-art is now a more than established standard, the black and white style and the overall quality proposed is truly surprising. Fabulous animations and very first-rate corridor design and mechanics. There are many elements taken in weight by sci-fi sagas such as Megaman and Metroid. In addition to the stylistic elements, various elements of the gameplay are taken from the latter, such as the functionality of the upgrades and the characteristic breakthrough opening of the doors.
After all, to understand how much DoinkSoft was inspired by the Nintendo title, it would be enough to look at the design of the mecha alone.

In the soundtrack the alien noises mix with rhythmic metallic noises, flooding the station with absolutely satisfying music and more than adequate to the setting, making Gato Roboto's sound design soar towards the peaks of Bit music. The rhythm is marked on every occasion and in every area, the most enigmatic rooms will have a less sustained but more claustrophobic rhythm, while the sections dedicated to battles will increase in intensity, to the point of being almost tachycardic.

Although I think the subtitle was enough to push the undecided to buy, by reading the analysis of the game you will undoubtedly realize its quality. A rewarding, fresh, frenetic title that always gives you something to do. In its few hours of duration it concentrates a respectable experience, remaining pleasantly attached to you. For the approximately 7 euros it takes to grab it, the purchase becomes almost mandatory. Claustrophobia and non-tolerance to the metroidvania genre are the only reasons that can keep you away from this title, but Kiki's sweetness will conquer you too.
Cat haters now know what to expect when they are able to fly mecha. Better make friends with them right now, don't you think?

Essential but functional pixel-art. The style chosen is very pleasant and the references to other exponents of the genre give an unexpected personality to the title. The possibility of changing the color palette is definitely appreciable.

Industrial-bit soundtrack of absolute depth. The continuous changes of tone and rhythm accompany the whole adventure making it, depending on the needs, more claustrophobic or more tachycardic.

Frantic and fresh, very balanced in managing both the exploration phases and the more excited ones. While some battles are more difficult than others, it never gets overly challenging. Excellent management of the platform phases, with a precision and response to commands from applause.

Did you like the article? Share it!
Audio Video Gato Roboto
GTA Vice City: all the tricks for PS5, PS4, Xbox Series X, One, Switch and PC ❯