The Gears of War series has undoubtedly revolutionized third-person shooters and Gears of War 3 has worthily closed one of the most significant trilogies of recent years in the genre. This, however, did not mean writing the final word on a series that has been able to create a vast array of fans over the years, and confirm itself for several of its mechanics as the reference point for each genre production.

Definitely passed from the hands of Cliff Bleszinski and Epic Games to those of Microsoft, the franchise was developed at The Coalition studios. To this team, the Redmond company has entrusted the task of renewing the saga: not an easy feat, especially when the previous one was loved by countless players and its protagonist entered the hearts of many.

With the events of Marcus Fenix ​​and the Delta Team closed, for Gears of War it seems the time has come to turn the page and look forward, looking for new heroes and new stories to tell. Gears of War 4 is set 25 years after the events that characterized the last episode of the first trilogy. The world population of Sera is reduced to a few hundred thousand. Many live under the rule of the New Coalition of Organized Governments within fortified city-states that protect the population from terrible weather storms. Others prefer to do so outside the city walls, where they have set up villages and other "free" aggregation points. One day ends in one of these communities JD Fenix, son of legendary war hero Marcus and colleague Anya Stroud, together with fellow student Del Walker. And it is precisely during his stay in that field that a terrible new threat appears on the horizon.

The game mechanics at the base of the campaign mode, which "runs" at thirty frames per second, do not differ much from those present in the previous chapters of the series, with the view positioned behind the protagonist, the covers to be exploited adequately to withstand the attacks and counterattacks, weapons and accessories to be collected and wisely rotated to master the most complex clashes, and a structure that turns out to be quite linear and guided.
The battles, however, are well calibrated and in many cases even spectacular, thanks to the character control system, really excellent and responsive with the two triggers of the pad used as always for aiming and firing, and the good artificial intelligence of the enemies, one new breed of monstrous creatures capable of developing sufficiently varied guerrilla tactics so as to offer the user an excellent level of challenge. Challenge that is sometimes made more complex and therefore more intriguing, by the presence of variable weather conditions, with in particular very strong sandstorms that affect the strategies on the battlefield, given that depending on the case they can create some discomfort (or advantage) to the player and his team, in the case of online multiplayer matches.

By the way, the online sector, which has always been the cornerstone of the series, offers several interesting modes, and above all a very fluid frame rate set at 60FPS, except for the classic Horde mode, here in version 3.0.

The latter brings within it several new features, such as the ability to build defensive turrets, barricades, weapons, etc, and choose the character class among the five different possibilities: Sniper, Heavy, Scout, Soldier and Engineer, to try to resist to the fifty waves of monsters. Of course, there is no lack of competitive PvP, characterized by the usual modes that have made the series famous and that even here it works wonderfully with the dozens of customizations and modes available.

Moving on to the technical sector, Gears of War 4 is a feast for the eyes. The scenarios, the characters, each element is rich in details and well reconstructed. Not least are the realistic animations of the characters, the quality of the textures, the modeling of each element on the screen and the particle effects, which give the game a decidedly credible aspect in every moment of the campaign, which remains fluid even if it runs at thirty frames per second even in the most chaotic situations.
The audio sector is also excellent, boasting good effects, a nice soundtrack and a good dubbing in Italian.

I have played and completed Gears of War 4 on Xbox One. 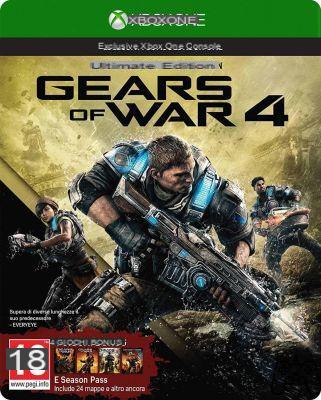 By reading our review to the end you will certainly have already understood how Gears of War 4 is an excellent title, a worthy heir to the trilogy of the old generation of consoles. For the "new beginning" of the saga, The Coalition has chosen not to completely revolutionize what were for years the foundations on which the first three chapters were built, proposing, in terms of mechanics, a middle ground between classic and new , thus managing not to upset any of the old and new gamers.

The soundtrack is not from an anthology, but it does its job well, especially accompanying the combat phases. Good dubbing in Italian.

The battle system keeps in the footsteps of tradition, but it is liked precisely for this. The pad characters in hand control themselves well, an online sector full of modes and fluid at sixty frames per second.

Did you like the article? Share it!
Audio Video Gears of War 4
Are Mew, Jirachi, and Manaphy stuck in Pokémon Brilliant Diamond and Shining Pearl? ❯