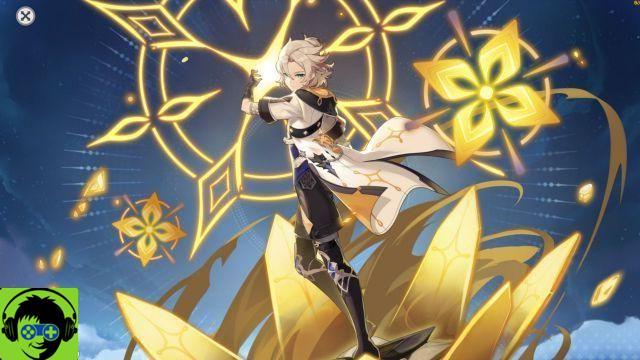 in Genshin Impact, Albedo is a quiet Chief Alchemist of the Knights of Favonius in Mondstadt. He is a 5-star Geo support character and wields the sword.

He can also deal tons of damage, especially with his sword (Festering Desire).

The Albedo banner is going to disappear for a while and will most likely return later. So, choose carefully whether you want to spend on him or not.

Break down
Below we will list all of Albedo's move sets and abilities. His passive talents, constellations, building suggestions, most suitable artifacts, and material requirements for ascension / talent will also be covered.

Homuncular nature
Rite of Progeniture: Tectonic Tide increases the Elemental Mastery of party members by 125 for a duration of 10 seconds.

Calcite Might
Transient Flowers Generated by Abiogenesis: Solar Isotome deals 25% more damage to opponents whose HP is less than 50%

Flash of Genius
When Albedo creates Weapon Ascension Materials, he has a 10% chance to receive double the product.

Opening of the Phanerozoic

Grace of Helios
Increase the level of Abiogenesis: Solar Isotoma by 3. The maximum upgrade level is 15.

Tide of Hadean
Increase Rite of Progeniture: Tectonic Tide by 3. The maximum enhancement level is 15.

Purification powder
Solar Isotoma increases their damage by 17% if active party members with AoE are protected by a shield created by Crystalize.

Albedo is a Support / DPS hybrid character. If you want to use it to its full potential, you should adapt it to other geographic characters.

It has a short skill cooldown and high energy generation, so taking it continuously in and out of combat is a viable strategy.

We will list 3 of the best 4-star swords you can use with Albedo along with the stat changes they impose so you can decide which specific sword fits your build.

The following artifacts are best suited for Albedo

The following 2 tables list the materials required for Ascensions and Talent Ascensions for Albedo.