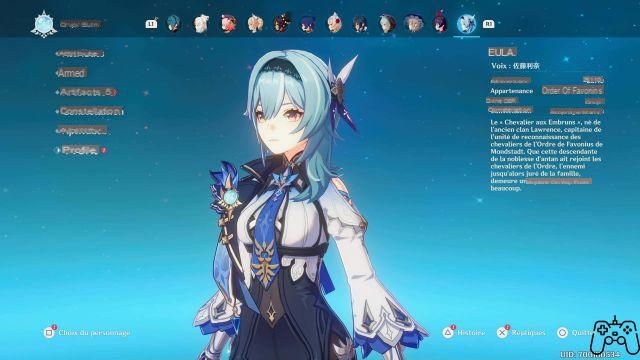 Eula is a captain of the Knights of Favonius Reconnaissance Company. He has some very ingenious tricks up his sleeve, and we will discuss all of them, including his he attacks, passive abilities, constellations and details about his ascension will be discussed here.

Agitation time
After consuming 2 stacks of Grimheart, a Shattered Lightfall Sword is created which explodes immediately, dealing 50% of the damage a normal Lightfall Sword deals.

Source of War-Lust
Eula gains 1 stack of Grimheart and the cooldown timer for her Icetide Vortex is reset each time Glacial Illumination is cast.

Tidal illusion
Eula's Physical Damage increases by 6% for 30s each time it consumes stacks of Icetide Vortex's Grimheart. Each stack consumed increases the duration of the effect by 6 seconds and can be stacked for up to 18 seconds.

Lady of Seafoam
The cooldown of Icetide Vortex in Hold mode is decreased and becomes equivalent to Press mode for Eula.

Lawrence Pedigree
Increases the Glacial Illumination level by 3 and can be upgraded by Eula to a maximum level of 15.

The obstinacy of the underworld
Lightfall Sword deals 25% more damage against Eula's enemies with less than 50% HP.

Chivalrous quality
Increases the Icetide Vortex level by 3 and can be upgraded up to a maximum of 15 levels.

Materials to raise the level of talents