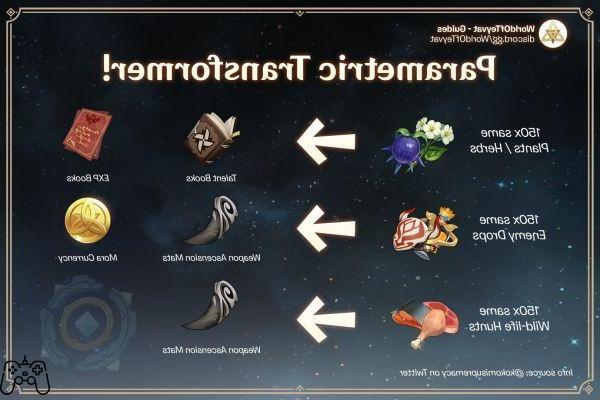 The Parametric Transformer is this handy device that allows you to convert excess ascension materials and other excess stuff in your inventory into other different items. Before you start using it, you must first acquire it.

Get the parametric transformer

There is a relatively easy quest with which players obtain the parametric transformer. What you need to do is go to Liyue Adventure guild.

There you can find Lan, and he will have a lot of side quests, but "Tianqiu Treasure Trail" is what we want. Although to actually get the mission the player may need to have completed some of Lan's other side missions.

The search is pretty straightforward; you just have to follow the map markers.

The first goal is to get a map; however, you will have to fight against some mobs while you reach us.

The treasure map will lead you to the Dunyu ruins. The treasure icon will point to the upper left corner of said ruins.

You can glide directly to that location if you teleport to the statue of seven, head directly north from there, and you can glide down.

There will be a stack of books in the marked location; interacting with them causes three circles to appear around the ruins, each with its own treasure to loot.

After getting all three, go back to Lan. Turn in the mission to complete it and get the Transformer.

Use of the parametric transformer

Okay, so there are two things gamers should know about the Transformer. Firstly, anything you transform will produce a totally random result, and secondly, you can only use it once every 7 days.

Now to actually use the parametric transformer, you need to keep adding elements until you reach 150 points. Points are generated based on rarity:

Once you reach 150 points, you need to hit it with your elemental powers until it reaches 100%, and voila! You will have new random items in your inventory.

This was not the only addition of the new update, the alchemical bench also received an update. Find out in our Dust of Azoth guide.