"With these cars I talk to them every day, they tell me things like:" Take me out today ", looking at these lines every day makes my passion still fervent" - Horacio Pagani

If there is one noteworthy feature in the Gran Turismo series and even more so in Gran Turismo Sport it is theexaltation of the automobile. The current generation of consoles has enjoyed excellent interpreters of racing video games, which to list them one by one would turn our heads for the qualities expressed by the various development teams. The element that strongly characterizes Poliphony's creature is not its being a racing game, but a car game. Yes, Gran Turismo Sport is really a game for car fetishists, for those who, when they see a Ferrari on the street, contemplate its majesty, for those who recognize a naturally aspirated V-12 from afar and also for those who, like Horacio Pagani, talk to us about cars. When we push ourselves to make these claims we are well aware of the historical flaws that the series brings on its back, yet, we fail to remain impassive when the garage curtain opens to reveal our newly purchased creature. Filming in the showcase is caresses on the liveries, which do no more than what a true enthusiast could do, highlighting every hand-drawn line, both indoors and outdoors. If it is true that the design of a car is a work of fine craftsmanship, we can only define Poliphony and Yamauchi as the "artisans of progress", where the magic of the car is transported intact from the road to our screen. Gran Turismo is an automobile game.

With each iteration that arrives on the market, the Gran Turismo series always makes a lot of noise, like a Lamborghini elegantly racing at three hundred kilometers per hour. Since 2017, the year in which Poliphony gives birth to its latest creation, several tires have drawn trajectories on the tracks, the best virtual drivers in the world have challenged each other with understeer strokes, but above all the beauty of cars has never diminished our adoration. Two years later, however, Gran Turismo Sport returns to the market with the "Spec-2" version which brings with it all the myriad of updates released by the Japanese team since its release until May 2019. What has happened in these two years of honored career? Will the good Yamauchi be able to raise the reputation of his latest creature, not particularly appreciated by users? Find out in our review.

Gran Turismo Sport: Spec-2 is essentially another game than its first edition. Since the launch period, the Japanese team has not been idle but has committed itself publishing content on a monthly basis. The community has played an important role in the post-launch content approach, so much so that the first noteworthy macro content is the "Countryside”A modality that was born initially as one reduced version of the renowned Gran Turismo mode, illustrious absentee of the last chapter of racing, and then expanding dramatically, so as to include dozens and dozens of events for every type of palate: from simple events with road cars, up to endurance races with prototypes of over 340 kilometers per hour. As it is not a Gran Turismo mode with all the trappings they clearly lack key features, such as the possibility of making changes to the aesthetics of the cars or simply a reasoned management of the credits available to ensure a gradual progression in the modality. Having been included for the specific will of an ever-passionate community, we find that the Campaign mode is all in all a great compromise for those who want to spend pleasant hours offline.

The second substantial change is represented by the introduction of ran in the wet, also this strongly desired by the community of enthusiasts. In spite of the welcome inclusion of the Campaign mode, however, the wet races are roughly a sop not perfectly successful, in fact, to date they are only available on two famous circuits: the Redbull Ring, an Austrian circuit famous for the most important car competitions and Tokyo Expressway, the famous city circuit proposed in several ways by the Japanese company. We do not hide that, after waiting two years from the promises made at the launch by Poliphony, we would have expected a far more complete implementation, and this not only with regard to the small number of tracks, but also to its flying (or pad) rendering to the hand. Starting to take the first curves you immediately notice a very rough approach in the management of the car, which essentially limits itself to reducing the "grip" on the track as if we had simply "run out" of the tread in dry conditions, leaving a very flat feeling both in straights and in curves, where the incidence of wet conditions should be very cumbersome. The fortunes of this new introduction are undoubtedly the graphic rendering, probably faced with higher priority during development, done so well that you don't regret any realistic aspect compared to a real race; the peak of the spectacular is noticeable in the replays, where there is an even better implementation of light management and a visual water management that manages to make credible both the effects of the passage of cars on the puddles during overtaking and the wet effect of the track and surrounding areas.

One patch a month

As previously mentioned, GT Sport Spec 2 enjoys the many additions made by the Japanese team to the sound of patches, published month after month. The physical version of the game contains 275 cars (out of a total of 293, released from May to October) and 75 circuits, which between original and reverse versions raise the threshold of fun and variety to the nth degree. The plus for those who buy the physical version is represented by the presence of two and a half million game credits, valid for the purchase of cars and ten Gr.3 class cars from the world final of the FIA Online Championship 2018.

The other great content aspect proposed, the Photo mode, is widely updated with numerous news regarding the locations in which to take photos of your racing cars, not to mention the many options added to the shooting parameters, such as additional filters rather than saturation effects and so on. The update of the "historical" calendar is also substantial, i.e. events of historical importance contextualized as opposed to curiosities related to the history of the automobile, such as the first landing on the moon which took place in the same period in which the Chevrolette gave Neil Armstrong a Corvette to be talked about.
The latest interventions in the offline sector are offered to the gameplay, in addition to the various balances of the performance of the cars, a nice finishing work has been carried out for the management of the suspension and the steering response at the wheel, initially poorly managed (test carried out on Thrustmaster T- 150). The driving model remains the same, voluntarily unchanged and which today more than ever finds an intermediate position between simulation and arcade, which makes it a very versatile and extremely enjoyable title with the pad which, in spite of the more simulative counterparts, does not require a steering wheel to fully enjoy the videogame package.
Unfortunately, to date we do not detect any improvements made to the physics of collisions, the true Achilles heel of the production, especially when compared to a much higher general quality and certainly does not stop at (at least) ten years ago.

The central part of the experience, as we all know, is not represented by the offline sector, but by the online component referred to in the title, Sport mode. Two years after the game's release, we can safely confirm that the initial skepticism we felt in entrusting the bulk of the experience to the online component has completely dissolved. The collaboration with the FIA ​​has proved successful, not so much from a purely playful point of view, as for the attention paid to organizing the world tournaments as deriving from this collaboration. The recent FIA Online Championship 2018 saw virtual pilots from all over the world participate with thousands of races held throughout the year, events that led to the final in Monaco from the sixteenth to the eighteenth of November, an event in which ours was also present Giorgio Mangano, third place in the European Final.
Returning to the Sport mode, the use of the "sportiness" rating proved to be decidedly effective, so much so that pilots willing to climb the rankings not only be fast on the track, but also have impeccable behavior, otherwise unable to enter the 'Olympus of the strongest pilots in the world. Over time, some small innovations have also been introduced to improve the general experience such as the introduction of the "penalty zone" or a pre-established area of ​​the circuit in which the drivers will be called to serve the penalties generated by irregularities on the track. While the penalty zone is a welcome introduction, we would have expected a slightly more refined netcode, especially as regards the management of penalties related to collisions.

Gran Turismo Sport Spec 2 contains all the content released in the various patches until May. You will still have to download the updates for the following months. What you will find in your hands is undoubtedly a refined product in the contents, but not without the historical defects of the series. 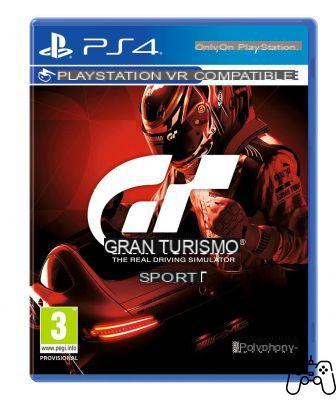 Ultimately Gran Turismo Sport Spec 2 does nothing but broaden the experience proposed by the first iteration of the title on all fronts, adding a Campaign mode for those who felt an irrepressible lack of it and expanding a fleet of cars making it respectable; also considering the considerable number of circuits and the excellent and proven online mode, Gran Turismo Sport can only be recommended first of all to car enthusiasts, and in general, and to all those who feel the need for a few laps of the track aboard digital wonders, both for those who want to try their hand at official FIA competitions. At the current price then, what could be better?

Extraordinary visual compartment, incredible light management, at all times of the day. With HDR activated it's pure enjoyment.

The audio sector is much improved compared to previous chapters, thanks to the technology developed together with Sony to capture the roars of the engines, masterfully reproduced.

Although there have been no substantial improvements in the formula over the Spec 1, this version does its duty in terms of content. Sorry to have to put up with the historical flaws of the series again.