Those who approach the Paradox titles for the first time must know that they try to make the player participate in the spirit of a specific historical period.
January 1, 1936, in the world totalitarianisms are preparing for war by eliminating internal opposition, the Balkan powder keg is only waiting for a spark to explode, while the victors of the Great War are still licking their wounds or going through the great depression, it will be necessary to find the courage to take command of an entire nation and lead it through the darkest hour in human history. Two years have passed since the release date of the title, and in the light of past expansions and what is known about the future, we can begin to make reasoned analyzes on the direction taken with respect to the previous iterations of the series, and to the other titles of the house. Swedish.
Hearts of Iron IV belongs to the grand strategy genre and as in the Europa Universalis series, with which it shares the game engine, you will directly control a nation. To facilitate newbies in the game start screen you will immediately have a list of recommended countries, divided into main ones (Italy, Germany, United Kingdom, etc) or secondary (Hungary, Canada) to take part in the conflict, another help that comes to the player is the ability to adjust, thanks to a series of sliding indicators, the power of the Allied countries and the Axis independently of the degree of difficulty chosen, and whether or not to bind artificial intelligence to follow the historical course of events.

The playing time is marked by the passing of the hours, used for combat resolution, while production and research are updated on a daily basis. This difference helps to distinguish and separate the two different aspects of the game, the military and the industrial. As far as the world chessboard is concerned, they will be controlled directly on the map i three different types of units, land divisions, naval fleets and flocks, with the concrete possibility that there are hundreds of units and dozens of clashes on the screen, open on several fronts, impossible to manage individually, for this reason the planning and assignment tools are essential in addition to giving bonuses to the units that have had the opportunity to stand by to plan orders, and the ability to organize and pursue a well thought-out plan triumphs over direct management of one's forces. As in the previous titles of the series, the possibility of choosing how to organize one's divisions by choosing the composition of the individual regiments returns, even if there has been a considerable simplification and reduction in the range of equipment available, a choice that meets the policy of attracting an audience. wider and less niche, with the possibility for the more nostalgic to raise the level of complexity thanks to mods available on the workshop dedicated to the care of this aspect. The characterization of military leaders has been deepened and made less cryptic over time, You will be able to keep track of the experience gained in combat and the progress in obtaining traits and honors that can assign different bonuses, to become true foxes of the desert or generals of steel.

Although land battles are the ones that have received the most attention, air and naval warfare also have their own dignity and importance, thanks to the additions of expansions such as Waking the Tiger and the upcoming Man The Guns, which open up a range of new possibilities such as bringing supplies to encircled troops, eliminating strategic objectives or cutting off enemy supply routes. Land units will never be eliminated directly in battle, but in almost all cases they will be captured during the retreat or locked in a pocket with no escape routes and reinforcements, in order to fight the logistical and industrial aspect at maximum efficiency, it will in fact be necessary to produce and guarantee a safe supply line from the capital to the front, with the risk of encountering bottlenecks if the infrastructures have been damaged by bombing or if the convoys are at the bottom of the sea sunk by a U-boat.

The industrial side is the broadest one and is divided into different cards that serve to manage the different aspects of the nation. The first screen with which you have the opportunity to interact and which has direct consequences on all the others is the one that concerns government decisions, from here you can choose economic and commercial policies, manufacturers and historical brands of equipment such as Porsche and Fiat and members of the general staff, from here you can also activate the national Focus that are used to unlock certain bonuses and to make historical events happen such as the Remilitarization of the Rhineland or the Attack on Pearl Harbor. Through the other panels we will respectively control the search for new equipment, diplomatic relations, the purchase of raw materials for the war industry, the construction of new industries, the assignment of production lines, decisions, recruitment and deployment of new divisions and logistics.
Compared to the other intellectual properties of Paradox, such as Stellaris or Europa, Hearts of Iron sheds some of its sandbox nature, the secondary nations are now uninteresting and scarcely playable and at the end of the world war and after 45 we begin to see the limits of the Focus system and technological research. In this perspective, the direction taken by Paradox to provide new Focus through continuous updates to characterize and make less anonymous secondary powers such as the Balkan countries in Death or Dishonor or those of the Commonwealth in Together for Victory adds new life to the game both in single and in multiplayer, and also increasing its replayability through the possibility of choosing completely ahistorical paths such as the Berlin-Moscow Axis, the French Commune, Reforming the Roman Empire are fun deviations from the path already traced.

For lovers of history the cure and the painstaking research and reconstruction work to autonomously appoint military divisions and endowments respecting the official military sources of the time or trying to maintain consistency with them if absent, giving an extra touch in making the on-screen units seem less anonymous and the player's immersion within the scenario.
The game, as already mentioned above, is powered by the Clausewitz engine,  although the graphic aspect is not particularly rewarding, more defined models and effects could be expected, it is balanced by an excellent sound department with dynamic effects depending on the type and number of divisions used in on-screen combat, while land music by Sabaton, which draw inspiration from stories of the Second World War, and are a worthy accompaniment to military successes and our defeats.

The game was tested on a PC with the following specifications: Intel Core i5-3570k 3.40 GHz processor RAM: 16 GB DDR3 GPU: NVIDIA GeForce GTX 1070 8GB. No particular slowdowns were found except in the most advanced phases of the game, indicatively from '44 onwards where the CPU is put under stress, the graphics are not expensive and you can keep the video settings set to maximum without problems even with GPUs lower end, in fact it is also enjoyable on portable devices as long as you have a sufficiently performing CPU. 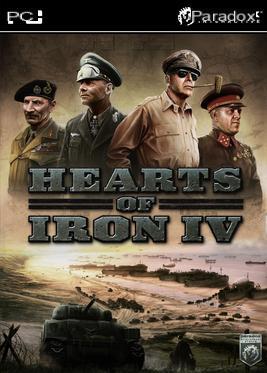 Hearts of Iron IV in some ways resembles a medieval joust, most of the time you spend preparing your steed, spear and armor, and studying your opponent, every single decision is a running step to gain speed in view of the impact with your opponent. Only those who are prepared enough will remain in the saddle, perhaps more hits will be needed to unseat the enemy after a long attrition, but for those who lose there will be no future.
Provided you want to tackle the steep learning curve and overcome the dated graphics the strategy branded Paradox Interactive will be able to reward players with hundreds of hours of gameplay in single player to hone your skills before taking on even tougher opponents in multiplayer mode.

Although the game interface is fully usable and guides the player to overcome the complexity of the title, we see that the quality of the models has not kept up with the times and the atmospheric and lighting effects can only mask part of these shortcomings.

The soundtrack is the work of composer Andreas Waldetoft who did a great job creating the right atmosphere for the different phases of the game, with increasingly violent and frequent rhythms as the world tensions rise, adding iconic pieces of Sabaton inspired conflict is the icing on the cake.

The learning curve is steep, and the absence of a proper tutorial explaining all the game mechanics to the player doesn't help. The constant notifications in the top center draw the player's attention to the most pressing issues, but they do not help to correct planning errors except by starting the campaign all over again, which can be very frustrating at first.

Did you like the article? Share it!
Audio Video Hearts of iron iv
Assassin's Creed Origins STRATEGIES: Everything you need to know ❯