To dismiss Hellblade: Senua's Sacrifice as a third-person horror adventure, heavily narrative and developed on the dichotomy between combat phases and environmental puzzles would be as correct as it is superficial., given that at the center of everything is the attempt to interactively explain the mental discomfort of people with psychosis: a disorder that compromises the perception of the plane of reality with symptoms such as hallucinations, bipolarity, schizophrenia and paranoia that alter the 'equilibrium. The analysis of the latest effort of Ninja Theory, of which it is appropriate to remember Heavenly Sword and Enslaved: Odyssey to the West, cannot therefore ignore an approach that takes into account the general framework, where the judgment of the single parts would not justify the quality proposed, on the contrary, by the whole.

The story of the protagonist, so essential in her role as the glue between the different gameplay sections, is one of the mysteries that unfold along the way; even if there has been a lot of talk about it now, I believe that any spoiler could compromise its playability, so I won't do it. Basically, though, the context is that of Great Britain north of Hadrian's Wall, built by the Roman Empire after the middle of the XNUMXnd century AD to prevent native tribes, such as the Picts of which Senua is a part, and the Vikings who arrived by sea from Scandinavia from breaking into its conquered territories. Ninja Theory uses this historical anecdote to outline the profile of a psychotic warrior, far from the Mediterranean culture and terrified by the barbarism of the Nordics, who he sets out in search of Helheim, the sacred place of Norse cosmology as the kingdom of the dead.

Her mission is to bring beloved Dillion back to life, even if it is immediately clear that it is a desperate undertaking, in some ways not unlike that told by the classic myth of Orpheus and Eurydice. Accompanying her on this journey are the voices of her multiple personalities, which crowd her mind without solution of continuity already from the introductory film, in which it is clear that the lands we are about to cross do not have a precise geographical location, but rather find the their raison d'etre in that portion of conscience traumatized and rendered unrecognizable by the disease of which he is a victim.

Le eight hours needed to get to the end credits and reveal Senua's past, as I wrote in the opening words, they will see the alternation of two very distinct gameplay: fights with the sword in small arenas and solving of environmental puzzles to unlock new levels and continue. Storytelling, entrusted to a binaural audio system that emulates human hearing in a three-dimensional sound environment, will always be present.. The narration takes place in the first, second and third person singular, sometimes even simultaneously, without written texts, a bit as if the player were a passive spectator of what is happening but at the same time the only active interlocutor of those events.

It is a significant implementation, to be enjoyed in headphones, the result of the collaboration with Paul Fletcher, psychiatrist and professor of medical neuroscience at the University of Cambridge, who supported the developers in the virtual reconstruction of the disorders caused by psychosis. The analysis of the disorder, however, did not stop at a consultation: working groups, case studies, round tables and game sessions with patients were organized coordinated by Wellcome Trust, a London-based non-profit association engaged in biomedical research and awareness raising. Hundreds of hours of work summarized in a documentary present as an extra in the final version of Hellblade, which can be recovered subtitled in Italian also on YouTube as long as you accept the inevitable presence of spoilers. Tameem Antoniades himself, co-founder and Creative Director of Ninja Theory, said that the biggest challenge they had to face was to return an image as faithful as possible to the genuine experience of those suffering from hallucinations and bipolarity. Visions, voices that overlap, distortions of the plane of reality, self-harm, nightmares with open eyes, memories to be relived in the present: these and others are the graphic and sound tricks put in the player's hands. I would like to anticipate that without such a broad framework of meaning, essential to be premised in detail, the judgment on Hellblade would not be what you will see at the bottom of the review.

Senua's journey to the heart of Helheim is essentially linear and forced, with no HUD or indicators that would have undermined its immersion. A series of obstacles will hinder his progress, such as closed gates and groups of enemies in small arenas without respawn.. As for the former, the game system provides for the search for a graphic correspondence between the runes inlaid on the doors and the environmental elements of the level in which you are, so depending on the position of the camera and the protagonist it will be possible to highlight details and precise joints between shadows, trees, crumbling walls, stairs and scenographic trappings so as to find the correct composition and unlock the way to continue. All this happens in the distorted landscape described above, that is, with symbols that appear on the screen, a dynamic lighting system that changes the perception of space and entire portions of the game world that take on different outlines depending on whether they are viewed from one side rather than the other.

The clashes, on the other hand, take place inside small arenas, in well-determined sessions, not random and never during the solving of a puzzle, where the basic mechanics are those of the fast slash, lunge and parry, with the possibility to throw the enemy off balance to make him lower his guard, dodge or dive. An apparently very simple system, which grows in complexity when you have to manage multiple opponents at the same time, seasoned with a sort of bullet time that can be activated when loaded and an autoaim that serves more than anything else to manage the view correctly. When too many hits are taken, the perception of "reality" changes and the colors light up red, all accompanied in a persistent way by anxious voices that suggest what to do or the presence of enemies behind you.

Both the environmental puzzles and the combat system have been the subject of great criticism; the first judged excessive and repetitive, the second obtuse, without evolution and with a scarce variety of engagements. It is clear that within a classic action the need to unlock the accesses by looking for hidden figures on the level between the natural and furnishing elements, without ever distancing oneself from the same dynamic, can be indigestible, but Ninja Theory has proposed dozens of variations on the theme, also born from the particularity of the implemented audiovisual effects. Therefore, the times in which the identification of the rune in the game world occurs in a manner already experienced previously are rare. Similarly for the fights, which on the one hand have few patterns, a roster of only five opponents and three boss fights, on the other hand they are very physical, characterized in a decisive and profound way by fluid and spectacular combos, with a parry and a counterattack. very rewarding as they are very simple to do given the large activation window. The game, on the other hand, includes a permadeath system that will lead to game over in the event that Senua is shot down too many times during the entire adventure..

The device used to justify permadeath is that of darkness, which is corroding the protagonist both internally, as a mental distress, and externally in the form of a terminal shrinkage. I don't want to go any further, because here we enter the field of spoilers and any word too much could compromise a genuine experience of Hellblade and her narrative universe. However, I would like to close by mentioning the quality of motion capture, on which the British developer has invested a lot of resources. An honorable mention therefore goes to the beautiful Melina Juergens, former video editor of Ninja Theory who, almost by chance, found herself covered with pointers and cameras useful to outline the physiognomy and movements of Senua, especially the facial ones, so essential when those suffering from psychosis manifest it mainly with the face. Winner of The Game Awards in Los Angeles in 2017 for Best Performance, Melina has been training physically for weeks, she has met the patients suffering from that disease on several occasions, he experienced the isolation in open spaces and the claustrophobia of closed ones, moved by the love for what he was doing and by a sort of personal redemption by virtue of having experienced firsthand that mental pain that it had to represent: chapeau.

This dedication, which anyone can deepen in the many articles and videos that have talked about it, combined with the fact that Hellblade: Senua's Sacrifice was developed by about twenty people and sold at a budget price despite the very high production values ​​in terms of graphics engine, animations and rendering, helps to celebrate the work of Ninja Theory as a product to be grasped as a whole, avoiding committing the gross error of encysting on the individual elements of a video game that will be remembered in the annals as a masterpiece.

I bought Hellblade: Senua's Sacrifice on PSN for a discounted 19.90 euro and enjoyed binaural audio thanks to a pair of Turtle Beach Stealth 700 with 7.1 channels and surround. 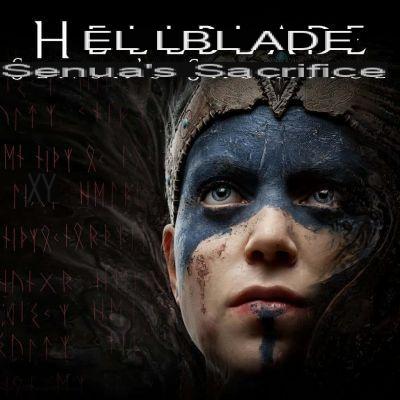 Hellblade: Senua's Sacrifice is a highly narrative production, with horrific tones, set in the wastelands of northern Europe at the time of the Vikings, when Norse mythology ruled the life of indigenous tribes with superstition, esoteric rituals and violence. The protagonist suffers from psychosis, a mental illness on which Ninja Theory has built a functional gameplay for the representation of symptoms such as hallucinations and bipolarity, made up of environmental puzzles and sword fighting. The avant-garde audiovisual sector, the budget price and an interactive reconstruction of mental distress resulting from a collaboration with patients and psychiatrists frame it as a video game to have in the catalog regardless of personal tastes.

A production at the top of the generation, with the flagship of a masterful motion capture and special effects designed ad hoc.

Experimenting with the binaural sound system that emulates human hearing in a three-dimensional sound environment would justify the purchase of Hellblade alone.

Divided between solving environmental puzzles and bladed combat in arenas, the gameplay supports storytelling very well even if it suffers from a bit of repetition.

Did you like the article? Share it!
Audio Video Hellblade: Senua's Sacrifice
Darksiders Genesis: How to Defeat Mammon ❯