Kingdoms of Amalur: Re-Reckoning, an old-time RPG… in every sense!

Eight years after the original release of the title, which took place on PlayStation 3, Xbox 360 and PC, returns to the gaming shelves Kingdoms of Amalur: Reckoning, in a revised and corrected version, called for the occasion Re-Reckoning.

Available for PC, PlayStation 4 and Xbox One and with a brand new expansion already announced for 2021, the title passed from the hands of 38 Studios to those of THQ Nordic arrives on the market full of anticipation, especially that of fans who have greatly appreciated the original release, passed too quietly, crushed by the weight of more important releases that have compromised its appeal.

Fortunately for myself and for those like me who loved the original, returning to Faelandia was possible even if I must admit that I would have expected a little more. So many things were basically left unchanged, and the will to play savings quickly pervaded the production, ending up being anything but commendable, in spite of a title that, narratively, still has few rivals today.

Return from the underworld

Whenever genres such as fantasy are touched, in cinema as in TV series, up to video games, it is evident how easy it is to fall into the abyss of repetition and the lack of original ideas, clearly except for some works that have managed to escape this reality.

And, today as yesterday, I really appreciated Kingdoms of Amalur: Re-Reckoning precisely for its enormous narrative goodness, one of the historical merits of the production. Let me be clear, the starting plot seems to have that flavor of already seen and heard, but immediately after the very first hours a multifaceted and layered narrative opens up before the eyes of the player beyond what one might believe. The story of the so-called "without fate", that is our alter ego, is truly complex and full of points resulting from a writing worthy of the best works of the genre, which forcefully distance themselves from the stereotypes of the genre, bringing a "screen" adult storytelling, meticulously curated and full of twists.

This turns into one rich, long-lived and exciting countryside, in which each passage deserves great attention as it is able to hide secrets or simply great information about the world around us, a world in which, in full fantasy style, elements such as struggles for power, discrimination stand out with strength racial and terror of the unknown. Our protagonist embodies a bit of all three of these characteristics, resulting all the time - at the same time - both a hope and a threat to the world.

This is also linked to the vastness and above all to the quality of the cast of supporting characters and accessory characters, who play a fundamental role in the economy of the story. Everyone seems to have something to say, everyone has their own story to tell and their secrets to keep and the secondary missions, often linked to the characters in question, are still pleasant and, more "in a nutshell", useful in terms of loot and rewards. The only negative note of the narrative, however, is represented by these secondary missions, often excessively detached from the main context.

The many accessory quests, although interesting, are often very distant from the main story, thus breaking the general rhythm and pushing the player (as in my case) to set them aside in order to focus on the story and the fate of our protagonist.

A gameplay of the past, for better or for worse

One of the strengths of the original Kingdom of Amalur: Reckoning was undoubtedly his gameplay. Knowing how to easily blend a typical action gameplay with an unmistakable classic role-playing style, complete with loot and experience points, to be unlocked and used to enhance one's alter ego, it is not something for everyone, and even today, we are convinced, the title has very few rivals in this respect.

For this reason, honestly, I would have expected a slightly more full-bodied work, more "massive" and able to further enhance the excellent starting material. Unfortunately, however, this did not happen, or rather, it only happened in part. In terms of gameplay, in fact, the Re-Reckoning version is limited to small tweaks, probably linked to balance and not at all aimed at distorting the starting style. Therefore, the addictive gameplay remains at the center of attention and interest, made up of now more enjoyable clashes, mainly for the purposes of a loot that, as in the past, is central and of great importance. Added to this are the more classic elements of the gameplay typical of products of the genre, such as crafting, alchemy and the enhancement of magic stones, useful for the construction of an equipment that is increasingly suitable for new challenges, gradually more difficult.

Because, even today, it is necessary to underline how much the level of challenge is anything but generous, and is also strongly linked to the small adjustments made by the team for this new edition. The rewards of the missions, for example, are now much more weighted, more specific, and make the progression, one of the most successful aspects both in the original chapter and in this remastered, one of the most evident qualities of the game, although in truth a lot complex and not very intuitive. Retrieving useful items is now slightly easier, and completing the missions offers a much more generous amount of rewards (in addition to the classic skill points) and above all more appropriate to the specific level and situation.

Between tarot cards, fate, karma and so on, the role-playing aspect of the experience is truly impressive but has remained fundamentally identical with respect to the original release, with the developers who, even in this respect, have limited themselves to filing away the imperfections or balancing everything. , without introducing anything truly innovative. All this without forgetting one of the most interesting news: the arrival of the mode Very difficult. It "forces" the player to approach the title in an even more tactical and reasoned way, forcing him to take into account many other factors, such as the elemental weaknesses of creatures, the type of weapon held, and so on.

Overall though, I have to admit once again that I would have expected some more news, but I had a lot of fun in the company of my handsome Uhtred (yes, I'm a fan of The Last Kingdom).

The most delicate aspect of this new edition is represented by the technical sector, the real hub of the project. And, unfortunately, I can't help but admit that I really didn't appreciate the development team's choice to treat this aspect with great superficiality, offering a final product, at least on the aesthetic front, which is sometimes impossible to propose.

Already at the time of its original release, in reality, Kingdom of Amalur: Reckoning brought a dated visual style to the screen, not very refined and excessively "flat", from the point of view of its polygonal density and in the attention to detail, in some ways "snubbed" and treated with great superficiality. Incredibly, eight years later and with an important gap in terms of potential performance of the hardware in circulation, I found in this new edition practically the same technical value, renewed exclusively by cleaner graphics and little else.

Lighting, textures, enemy and character designs, all have a very low technical quality and that many would not have thought of finding again today. Fortunately, at least, I was able to appreciate the excellent work done with the frame rate, finally anchored to 60fps, which makes the clashes, for such a title, of a completely different thickness. Unfortunately, however, the good news ends there. Even the menus, the hud and the texts remain basically the same and the loading times are still very long and continuous, even in the passage from one area to another.

To close the discussion on the audiovisual sector, as usual, I mention the sound sector, certainly of a good level from the point of view of the OST and also of dubbing, especially if we consider some specific characters, well interpreted by the actors assigned to them. .

I (re) played Kingdoms of Amalur, in the Re-Reckoning version for about 35 hours, focusing exclusively (or almost) on the main campaign. I was able to use the title on my PlayStation 4 Pro thanks to a code provided to me by the publisher. 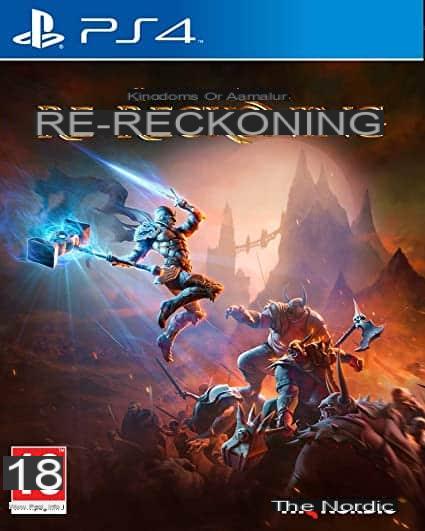 Kingdoms of Amalur: Re-Reckoning is a questionable but still important operation. From the point of view of innovations and attention to detail, this new version adds practically nothing really important (apart from 60fps), but has the great merit of making the public rediscover a product that is as important as it is excessively passed on in silence during its original release. The DLC announced for next year can complete an overall satisfactory overall picture, but beware: as magnificent as it is, the title shows the weight of the years in all respects, and this could represent an obstacle, especially for the most pretentious players. .

Graphically, I don't want to go around it, I was really expecting something more. In addition to 60 fps and a more precise general cleaning, in fact, there is very little and this I do not consider "normal" for a remaster operation in 2020.

Excellent soundtrack, as in the past. The dubbing is also very valid, thanks to a cast of very convincing voice actors and above all perfectly immersed in their parts (except the protagonist, silent as always).

Small tweaks to the gameplay, overall functional. Once again, however, I feel like saying that it is all too little courageous and devoted to "saving". However, it remains a very fun and rewarding game, today as yesterday.

Did you like the article? Share it!
Audio Video Kingdoms of Amalur: Re-Reckoning, an old-time RPG… in every sense!
The complete solution of Maniac Mansion ❯

add a comment of Kingdoms of Amalur: Re-Reckoning, an old-time RPG… in every sense!