The first “Knowledge is Power” can easily be defined as one of the most successful PlayLink products everdespite its flaws. For those who still don't know, the PlayLink series includes a range of titles that can be played in groups through special applications downloadable on mobile phones and tablets (a winning choice to say the least, as we all have at least one by now). The guys from Wish Studios, thanks to the positive results of the first chapter, have therefore decided to create Knowledge is Power: Decades, focusing the quizzes on pop culture from the XNUMXs to today. Will they be able to improve even those characteristics that did not allow the previous title to reach the Olympus of party games? As usual, to find out, just read our review!

As obvious as it is, we still prefer to specify it: in Knowledge is Power: Decades  there is no underlying story and / or narrative mode. The game is, in all respects, a prize quiz where we will have to choose our character and throw ourselves headlong into a series of questions to answer. As anticipated in the first paragraph, in this new chapter of the series we will find ourselves responding to questions from the pop culture of the last forty years. Cinema, TV series, books, comics, television programs are in fact the main topics to know, meeting people (such as those who are writing to you) who do not show too much affinity with subjects such as Geography and History. The questions are always interesting and varied, allowing players to play many games before encountering the same questions again. In short: if like us you are passionate about nerd culture, this could be the perfect game to spend a few Saturday nights in company (from two to six players, of course).

Beyond the classics multiple choice questions, also The Decades presents some challenges which, from time to time, will break the rhythm with very entertaining minigames (such as matching the name of a character to the series to which they belong or finding the foreign word among the four proposals linked by a particular logic). In case you do not appreciate these challenges (designed to vary the gameplay) it is also possible to remove them from our games through an excellent game menu that allows us to customize our races down to the smallest detail. Also present in the first episode, the Powers also return, skills that can be used before answering the many questions to damage and slow down your opponents. Hinges to open, padlocks to unlock, ice to break and many other pitfalls are ready to hit the mobile devices of other competitors, allowing you to gain valuable time and be the first to answer the question (thus earning more points). As for the challenges, if you don't like this mechanic it will be possible to remove it through the appropriate (and already mentioned) menu. We come to what was the weakness of the first Knowledge is Power and which, unfortunately, has not undergone improvements in this second chapter: the Pyramid of Knowledge. Once the final challenge is reached, the points earned will be converted into steps of a pyramid, allowing the strongest to start higher than the others. What did not convince us, however, is how those who manage to answer the questions of the last challenge manage to climb faster towards victory, making the rest of the race almost useless.   I'll explain: imagine being the best player in the game and always being able to answer questions first; once you reach the Pyramid of Knowledge you will be placed three steps above the other players, but, by pure chance, the last three questions do not fit into the things you know. Here, in that case it will be the player who will be able to respond faster to those answers to pass in the lead, surpassing you only in this last game, but thus making your commitment for the rest of the game useless and taking home the victory. Let me be clear: this gameplay slip is evident, but it doesn't make the title unplayable. We expect, however, that the necessary changes will be made in case Wish Studios decides to make a third chapter of this brand. Small (and last) feature that we find ourselves analyzing in The Decades is the “Quiz Boom”, or a reduced version of the game (designed to be enjoyed only in single player) that is possible play directly from your mobile, without having to start the title on your PlayStation 4. It is nothing fundamental, but it will surely entertain you for a few minutes every day, during your train rides or your sessions in the bathroom.

From a technical point of view, Knowledge is Power: Decades features a fun-to-see character design and made with a style that reminded us a lot of the stop motion of some films made by Studio Laika. The "elevator" soundtrack never tires the player and to remain in the background throughout the game, without ever being boring. Finally, the dubbing of the presenter is good which, despite the myriad of dialogues, can be listened to without annoying even after many gaming sessions. Fortunately, completely absent bugs of any kind, from frame drops to unexpected blocks of companion apps (really comfortable and free of defects). USEFUL INFO

We wrote this review after playing the title thoroughly during the Christmas holidays. 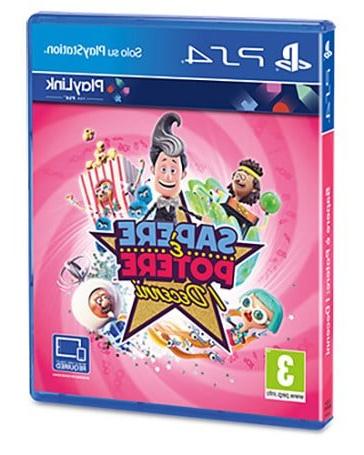 Knowledge is Power: The Decades is a valid successor to the first chapter. The choice to use questions from the pop culture it was certainly a move for the masters, allowing to obtain a much more interesting title for a certain slice of players. Too bad only for the Pyramid of Knowledge, true and only defect of a title that, also considering the quality / price ratio, we would like to recommend to those who want to spend a weekend in the company of friends. Review by Luca Mazzocco

The stop motion-style graphics certainly give a touch of class to the production which, while not making a miracle cry, manages to be beautiful to see and easy to read for the player.

The neutral soundtrack and the good dubbing speak for themselves: the audio sector of Knowledge is Power: The Decades will not be remembered in the history of videogames, but manages to remain in the background and not bother (thus making it perfect for a game of this type) .

Varied, fun and editable at will; the latest effort by Wish Studios works and entertains in the most immediate way possible. As already reiterated several times, it is a pity for the lack of correction of the gameplay linked to the Pyramid of Knowledge, which makes the final part of the challenge too important compared to the rest of the race.

Did you like the article? Share it!
Audio Video Knowledge is Power: Decades - Ready to Feel Smart?
How to evolve Eevee into Leafeon and Glaceon in Pokémon Brilliant Diamond and Shining Pearl ❯

add a comment of Knowledge is Power: Decades - Ready to Feel Smart?