Luigi's Mansion 3: all the gems floor by floor in video 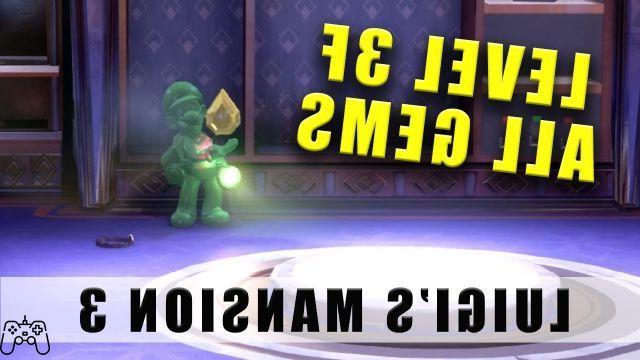 Luigi's Mansion 3 has hit the mark. There's no denying that the new spooky adventure of Nintendo's most unlikely ghost hunter has brought a breath of quality to the Nintendo Switch lineup. It is no coincidence that you Gameplay Cafè readers have elected it the most anticipated game of the month of October.

In the huge hotel location of this new adventure, Luigi will not only have to save his friends and retrieve the elevator buttons to climb higher and higher, but it will be his task - secondary and more suitable for collectors - to track down the 102 gems scattered throughout the hotel floors, six for each level, some of which are not exactly immediate to find and which need to retrace your steps later to find them all and platinum the game. Below you can find the guide in video the location of all the gems of Luigi's Mansion 3.

Going into the depths of the Hotel Miramostri, the real ones not the simple Basement, you will find some beautiful environmental puzzles that hide the gems. However, you have to put your soul in peace because in this level the collectibles can only be found after having passed a second time towards the end of the game (and I do not say anything else to avoid spoilers).

Luigi's Mansion 3 first explorable level and first gems that don't seem that hard to collect. In reality it will be necessary to wait and retrace your steps later with Gommiluigi and the sucker in order to recover every precious collection stone. The reference is above all to the red one in the generator area of ​​the garage (on the left) and the blue one to be recovered by entering from the right side, again in the garage, passing through the ventilation ducts.

Being the second area to which you enter, you might think you have an easy life with gems, instead there will be some that are not exactly easy to find and inaccessible without the Poltergust G-0M upgrades. Of the six on this floor, the least visible and most complex is the yellow one to be unlocked by activating the chandelier, although surely someone has forgotten to make the sofa on the left visible and make the ghost of the white gem appear.

In the Mezzanine, which in the early stages is still marked as part of the first floor, the gems are mostly traceable without too much trouble even if the least immediate one to be traced is certainly the one in the games room. In fact, retrieving the sword and throwing it at the target may not immediately come to mind.

I must admit that I personally found it difficult to find all the gems in this section, especially the first one. To reach it you need to go through the shopping area via the right terrace of level 2. Also the gem in the back of the second level, which is reached via the stairs that appear with ultraviolet light, needs to have a good shot. eye to be recovered on the first pass.

This plan of Luigi's Mansion 3 must be faced with no rush to collect all the gems. Most of them are easily intercepted in the scenario already in the first step. The only one a bit more mangy is the blue one to have which you need to make the bottles ring in sequence to open the safe. To complete the level you have to return later towards the end of the game with the last power of the Poltergust G-0M unlocked and also get the last one from the TV behind the scenes of the stage.

Another floor of the Hotel Miramostri agile enough to complete by taking home all the gems. As always we will have to go back over there to have them all. The strangest to take for me is that of the telescope. I never expected to find one there, or that it would make me jump in fright.

This floor of Luigi's Mansion 3 was the one that gave me the most trouble to recover all the gems. The one hidden in the wall, the armor to appear - which I hadn't really taken into consideration - and the cursed semi-hidden gear of the yellow gem made me suffer and pass over this area many times.

In the Hotel Miramostri there are not only difficult floors to complete, but also some environments in which to reach the gems in tranquility such as the botanical rooms. Although here surely someone has forgotten to go through the room with the mushrooms to go down below it.

In this plan, collecting gems is only apparently easy to complete. The red stone under the carpet in the hall is hard to notice, as is a tricky hair to retrieve the block of ice on the narrow metal scaffolding above the room with the four TVs and then bring it to the fire afterwards. What fire? In the video this last step is well shown, fear not.

One of the simplest plans to complete when it comes to gems. Few problems and almost all clearly visible and reachable once Toad plays the part of him. Shoot it everywhere and you will have your collection certainly complete.

The treacherous sand of the Egyptian Hall of Luigi's Mansion 3 hides a few passages to reach the gems of this floor from free with holy patience. However, with a little care in cleaning all the rooms of the sand, it will not be an impossible task to complete the sextet of precious stones.

The magical floor of the Illusory Rooms of the Miramostri Hotel offers a whole series of magician's tricks that often hide the gems. It's a matter of sharpening your eyes a little and that's it. The only stone a little less immediate to recover is the purple one since the use of the giant hat is not easy to interpret.

This level, which is one of the smaller floors in the entire Luigi's Mansion 3 hotel, hides its gems well. You have to check every nook and cranny, follow the tracks and explore everything in detail in order to find all the collectibles.

And as everything seemed to be particularly facilitated in Luigi's Mansion 3 as regards collecting objects, the Fitness Center is there to change everyone's mind. The gems of this level are well hidden and will require special actions to obtain them. I'm sure many will find this video guide quite helpful.

At the end of the game comes one of the most inspired levels when it comes to hidden gems. The one hidden in the block of bricks to hit as if we were in any Super Mario and the secret vault are perhaps the funniest secrets to find in the whole game.

Luigi's Mansion 3 closes on top of everything, on the Penthouse of the hotel that tests the player's skill for the discovery of gems. The yellow one is a small puzzle within the puzzle, while the blue one hidden under the room you see on the map will be perhaps the last one that many will find. Better to collect all the gems before the final boss as there will be, for obvious reasons, no possibility to explore the hotel after the last boss fight.

Videogamingallday.com Help Did you like the article? Share it!
Audio Video Luigi's Mansion 3: all the gems floor by floor in video
Age of Empires II - Cheats ❯

add a comment of Luigi's Mansion 3: all the gems floor by floor in video