When the wait for a much-desired title gets long, the fans' expectations often grow out of all proportion. So at a certain point it becomes obvious to unleash the fury when, on balance, a game turns out to be a little different from what they expected. Mafia III knows something about it, game that, net of a series of its own problems, shortly before and after its release on the market suffered an authentic and sometimes unjustified media lynching by a fringe of disappointed gamers. We will tell you the reason for part of this disappointment in our review.

The title is set in the late 60s in New Bordeaux, a fictional version of New Orleans. Precisely in this mysterious and fascinating city the player plays Lincoln Clay, an orphan of color but also of Italian origins, Vietnam veteran. Once back in the city, the boy finds himself involved in events much bigger than him, where he loses all his affections at the hands of the ruthless boss of the Italian mafia. Salvatore "Sal" Marcano. Thus begins a long journey for Clay that will have to lead him to carry out a violent and bloody revenge with the aim of dismantling the Marcano criminal organization and killing his head of the family.

However, Clay must first get rid of the boss's lieutenants, in order to weaken him. To do this, it is necessary to take control of the various districts into which New Bordeaux is divided: translated in a nutshell the player must carry out a series of primary and secondary missions that serve to bring to light the two henchmen who manage the local racket on behalf of the final target to be assassinated. By damaging their criminal activities, the two thugs will jump out and, one by one, can be killed or recruited. At that point you can point to the boss of the area, eliminated who, you get the neighborhood that can finally be entrusted to the management of one of Lincoln's allies.

The clan is made up of Cassandra, Burke and Vito Scaletta (the protagonist of Mafia II): their use allows you to have access to a whole series of bonuses and upgrades depending on the income they will be able to generate. The important thing is to be fair and not to put any of the three at a disadvantage to prevent someone from rebelling or granting their loyalty to enemies. The approach is perhaps too schematic, in some ways, and it is understandable that it has disappointed many. But I liked it, and I must say that I felt a certain satisfaction in stealing land from the rival Family one piece at a time, to make it mine.

The story of Mafia III is told with a cinematic cut that exploits the method of storytelling style cinema truth to show gameplay sequences interspersed with interviews and statements by the protagonists, collected, however, years after the facts. A formula that I found apt for the type of adventure and for the topics covered, also because in this way the plot lends itself to different food for thought, keeping the player glued to the chair thanks to a right charge of pathos and curiosity, well interspersed with sequences real games dedicated mainly to the revenge of the protagonist and his partners.

In the face of a well-constructed story and several interesting ideas, Mafia III offers the side of some missed optimizations that ruin the experience.

First several side missions are repetitive and they limit themselves to changing only the subject (a drug dealer to be beaten and interrogated rather than a drug addict, the back guard of a second-rate criminal to be killed instead of a pimp, etc), but not the substance. Moreover there is an artificial intelligence that, especially in stealth sessions, certainly does not shine by logic: often the enemies fail to see Lincoln crouched half a meter from them, or do not notice the murder of one of their companions a few meters away. Other times, however, they seem too active and sensitive to the slightest noise, even from a great distance.

Law enforcement behavioral routines also sometimes leave something to be desired: when they have to chase someone on foot down some alley, they go haywire and after a while they get tired of looking and go back to the main road, while in a car, they are ruthless towards Lincoln if he drives himself a vehicle.
By the way, the driving system is extremely arcade, with cars that can be customized and upgraded, or used in twelve races scattered throughout New Bordeaux, including six circuit races and six finish line races, by downloading a special patch.

Moving on to the technical part, the game is anchored at thirty frames per second and at 900p on Xbox One, but it doesn't weigh too much on its usability, so much so that personally I have not witnessed any problems with slowdowns or not very fluid situations not even in the most chaotic situations. Graphically, the title is beautiful to look at, although it does not scream a miracle: New Bordeaux is very large and carefully crafted, even if different textures used in the interiors and in the secondary elements of the scenario leave something to be desired for quality. Fortunately, the city is graced by an excellent variety of environments and architectures, then enhanced by a good lighting system and a dynamic day / night cycle as well as variable weather.
The character models, for their part, are well built and animated, as opposed to the secondary ones, which are made with a slightly lower quality. After the various patches released in recent months, the title has still improved from a technical point of view.

The audio part is also excellent, with good sound effects, but above all an anthology soundtrack full of licensed songs: listen to songs like Paint it Black or Sympathy for the Devil by the Rolling Stones, Aretha Franklin's Chain Of Fools or Steppenwolf's Born To Be Wild while wandering around town or fulfilling a mission is something exciting. Everything is enriched by conversations, news and commercials that are broadcast on the radio. Without forgetting the valid dubbing in Italian, which helps to better identify the player.

I played Mafia III on Xbox One. 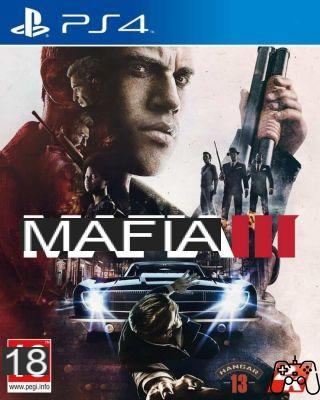 Mafia III is a difficult game to judge, as it is beautiful from some points of view, but also a tad disappointing from others. On the one hand, it is liked for the plot, the soundtrack and the cinematic setting, elements capable of keeping the interest in the player alive from the beginning to the end; a little less due to the defects described in the review, above all a level of challenge calibrated downwards, a certain basic repetition in the secondary missions and an artificial intelligence that is not always up to par. It all depends on whether or not the player wants to turn a blind eye to these negative aspects: in which case, the Hangar 13 title could still be enjoyable and all in all pleasant to play.

The city of New Bordeux is well crafted, as are the main characters. The polygonal models of the cars are good, minus those of the secondary characters. The textures used in the interiors and secondary elements of the scenario seem to be from the past generation of consoles. Beautiful effects of light and shadow and those related to climatic variations.

The soundtrack is simply an anthology, full of licensed songs by artists such as Rolling Stones, Ramones and Beach Boys, just to name a few, also enriched by conversations, news and commercials of the time. Dubbed in Italian.

Good mechanics related to the shootings and the character control system, secondary missions in the long repetitive, artificial intelligence to be reviewed.

Did you like the article? Share it!
Audio Video Mafia III
Best moveset for Venusaur in Pokémon Go ❯