It's been exactly 19 years since the last one Metroid 2D. Since then it cannot be said that the saga has completely disappeared, considering the release of the exceptional trilogy Premium and the most unfortunate Other M. Already in 2017, however, with the release of the remake Samus Returns on 3DS, Nintendo was beginning to pave the way for the big comeback of Samus. At E3 2021 it was then announced as a surprise Metroid dread, a follow-up expected for almost 20 years and which would be released very soon.

The Dread project actually has very distant roots. Born immediately after the development of Metroid Fusion, it was shelved because at the time Nintendo did not believe that the technology was adequate to develop the level design ideas behind the title. Thus, after many years (together with Switch Oled), we have been able to put our hands on a sequel to a saga that has contributed to shaping a genre that is beloved today, that of metroidvania.

A job for architects

Metroid Dread is in some ways an extremely orthodox game. The collaboration between Nintendo and the talented Spanish team MercurySteam produced a title that hasn't looked anyone in the face, least of all its competitors. Dread restarts from the typical sensations of the saga, however, going to evolve the most complex aspect of a metroidvania: the level design.

Those who know the saga will find themselves faced with a sense of familiarity with the typical atmospheres. Partly taking up some characteristics of Samus Returns gameplay, Mercury Steam accentuates Samus' dynamism even more, giving us an extremely mobile and fluid heroine, capable of managing an infinity of moves mostly related to the upgrades of her suit.

Beyond the goodness of the gameplay, however, the exploration of the game world is striking. For those unfamiliar with the genre, i Metroidvania they base their level design on a more or less marked use of backtracking. We are talking about that feature for which each new upgrade opens new doors or roads in areas already explored or for future exploration. Metroid Dread is certainly not far behind, but in that sense the stratification of a mammoth map is striking and extremely branched. If on the one hand we feel overwhelmed by the myriad of paths and possibilities that we can take after a handful of hours of play, on the other hand we soon have the feeling that the progression proceeds in a rather linear way.

The work done on the level design is truly mammoth

If it is true that there are many roads, the visual cues within the map are placed with extreme skill in such a way as to reduce downtime. If you happen to take a power up and unlock a teleporter thanks to this new power, it is highly likely that, even if this portal will take you back to one of the initial areas, it will be necessary to take it to continue our adventure. One is never too sure of taking the right path, yet it has rarely happened to get lost. Metroid Dread immerses us in a layered map as if it were drawn by an architect and at the same time makes us continue with uncertainty but without hitches in what is in effect an untangled labyrinth.

We played Metroid Dread on the new Nintendo Switch Oled. 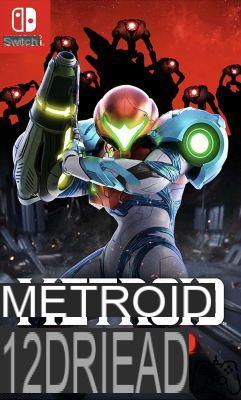 Metroid Dread doesn't just evolve raw level design. The fine work done by the architects of Nintendo is punctuated by a particular mechanic that shuffles the cards on the table. We speak, of course, of the much talked about EMMI. These robots, placed in virtually every area, are unbeatable at first. The only way to advance is to avoid them and get out of their patrol area, where, however, we will often be forced to pass in order to continue.

In these phases the perspective is completely reversed: from hunters you become prey. The action becomes frenetic and throbbing, returning feelings of pure terror (in fact, “Dread”). The fugues work perfectly and guarantee a good variety and a perfect rhythm every time.

Dread is an almost arrogant video game that has nothing to do with the recent metroidvania. It does not propose elements Souls Like and a reasoned and thoughtful exploration such as Hollow Knight. It doesn't add markedly platforming elements to the gameplay like Ori. No skill trees and hybridizations with RPG elements. The only time you will find yourself opening the menu is when you have to consult the immense game map. Upgrades are added one after the other to Samus' armory by making full use of the joycon keys.

Dread takes up the classic formula without hybridizing in any way

The more you advance in the adventure, the more Samus will be able to do more and more complex actions. The map will open more and more detecting its deeper ramifications. We do not exaggerate in saying that, although the width of the map is remarkable, the fluidity and the possibilities of movement granted to Samus in the final stages of the adventure allow us to practically turn the entire map to recover the many objects left behind without ever doing use of teleporters. Dread is a pleasure to play and offers an upwardly calibrated but never frustrating challenge. The whole is embellished with some of the best boss fights ever seen in a metroidvania.

Metroid Dread is not a perfect game. It does not offer a technical sector of excellence. It does not offer a memorable artistic level or an impacting soundtrack (even if extremely functional to the atmospheres to be recreated). However, it goes on to continue a discourse that has been interrupted for almost twenty years and it does so by aiming with conviction proposing and enriching beyond measure all that contributed to making Samus a legend. Dread is a powerful, aggressive and arrogant relaunch, with the awareness of those who have treasured their past but of those who also know how to look out into the future, making the brand known also to the new generations. Looking forward to reviewing the Prime series, Metroid Dread is more than just a starter.

Metroid Dread is not a technically excellent title. However, the technical sector is more than excellent guaranteeing a solid fluidity and well-kept animations. Too bad that everything is not accompanied by a particularly inspired artistic sector.

Forget the triumphant soundtracks from previous chapters. Dread leaves room for ambient music and a painstaking sound design that will certainly not be remembered in history but which turn out to be extremely functional. Also noteworthy is the presence of Italian dubbing.

Metroid Dread has simply perfect gameplay. An extremely dynamic Samus, equipped with an infinite armamentarium, supports a level design that enhances its characteristics like never before. Traversing the entire map in the final stages of the game is an absolute enjoyment.

Did you like the article? Share it!
Audio Video Metroid Dread takes Samus back to the stars
Monster Hunter Rise - Guide for new hunters, made by an (in) experienced player! ❯