200 Million. This is the figure that defines today Minecraft as a series, however, we're not talking about the cubes needed to build some virtual city, but the impressive number of copies sold. Markus Notch Persson's creature is now more than a game; it is a phenomenon, and as such it is managed, producing not only objects linked to it, but also some videogame derivatives, such as the role-playing game that is the subject of this review.
Turning Minecraft into another type of game is both easy and difficult. Easy because the original work is the archetype of the neutral sandbox, a forge to create and build multiple things. Difficult because just starting from such generic bases even the most timid choice made by the developers ends up being clear. What kind of game to play? What features should it have? Making a decision also means taking on the responsibility of shaping Minecraft in a form that risks not adapting to its target audience, so huge that it is difficult to identify in the nuances of taste.

The title arrived on the virtual shelves of consoles and PCs in the end is halfway between RPG and Diablo hack & slash, but it could be a thousand other things, because after all it was enough for him to have the name of Minecraft to draw attention. Perhaps to the point of suggesting that if he hadn't called himself that, he wouldn't have gotten much attention based on his mere caliber.
And genericity is the stylistic yardstick behind every single aspect of this production, to the point of making it a title designed to please anyone, but perhaps not thrill anyone. Appearance, the latter, which seems due to a spasmodic search to try to make it accessible to everyone, but precisely all the two hundred million who have already bought the original.
Playability is perhaps the best part of the whole production, as it is simple, immediate, smooth and relaxing. There are very few actions to perform and each is performed with a simple push of a button, without the complicated maneuvers with which colleagues try to offer a learning curve for more experienced players. Learn the mechanics of Minecraft Dungeons it is very fast and within the reach of even the smallest ones, however in the long run it lacks that playful depth to offer something more substantial and everything soon leads to repetitiveness.
One short range and one ranged attack, one dodge and one spell; the ways of dealing with enemies soon become few and the sense of repetition of things already done is further emphasized by other characteristics that negatively affect the whole, such as longevity.
Concluding Minecraft Dungeons for the first time does not take more than six hours, leading the group of bold cubic heroes to defeat the evil villain of the moment faster than any other hack & slash on the market, indie included.

The only solution to not uninstall the game immediately after is to re-face all the missions of the campaign at the two higher difficulties. To overcome this challenge too, however, it will be essential to repeat and repeat missions already completed in order to enhance your character and obtain loot and higher quality equipment.
The finding of these objects, however, is linked to a random donation system, so you are never sure what you will get, often ending up continuing to redo things already done only waiting for the right time to receive the tool it does. to your case.
The only alternative is to collect emeralds over the course of the levels, but these can only be traded at merchants for others lootbox regulated by a random algorithm, always leaving the player with no choice as to what to receive. Through experience points it is possible to obtain enhancements, such as useful special effects assigned to swords or armor, however not even this comes to exempt from the continuous cycle of raking the loot, as the essential part on which to build the growth of the protagonist is precisely the whole. of weapons and armor. The general system is also in this case simple to manage, as it is devoid of complicated numerical statistics, however completely regulated by the randomness of the lootboxes, which does not allow you to choose the progression in an orderly way.
Only the cooperative slightly softens the monotony of the whole, allowing you to accompany a group of friends in battle (locally or online by invitation) and being enjoyable thanks to a difficulty that rises based on the number of players present, always maintaining the challenge proportionate.

Unfortunately, to mitigate this aspect, we cannot even count on a well-defined role sector. Having a fantasy setting on which to come up with the most disparate things could have given a lot of creative space to the developers, however this option was ignored. Overall, there is therefore a lack of that set of dialogues, choices, interactions, which could have kept the user's interest high by offering them a story full of details and anecdotes useful to characterize their hero or the game world. The same conformation of the levels, which can be selected as closed areas from a menu, while in the central camp, lacks a sense of organicity and breadth that would have better delineated the whole.
In general, Mincraft Dungeons is a game that, while not unpleasant, does not excel in any of its components and is penalized by a rather heavy lack of content, even for an indie title.

Minecraft Dungeons is an indie title, sold for around twenty euros. However, its contents are very limited, to the point of making it essential to wait for the arrival of further updates or DLCs so that it reaches proportions comparable to those of any other hack & slash on the market. 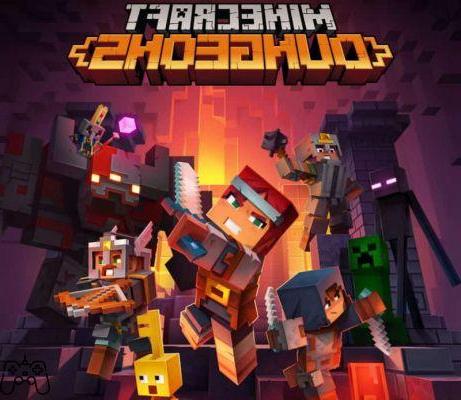 The graphics of Minecraft Dungeons are necessarily linked to having to maintain a stylistic continuity with the original work. This means that the game world, and any character, is made up of cubed polygons, practically naked and lacking in detail. Although this feature must necessarily be set in this way, the general effect is still minimal to the point of excess, perhaps resulting unwelcome to those who approach the title in search of only a good RPG.

A soundtrack with medieval-like melodies and lullabies is well suited to the fantasy setting. The music is pleasant, however none goes beyond the discreet, flowing in the background but without memorable themes.

A smooth playability, however lacking in thickness. Designed to be accessible to all, but not to thrill anyone. The game mechanics are immediate and easy to master, but the lack of options ends up making everything repetitive. A well-implemented co-op can ease the addiction of having to repeat the same few missions over and over, just to try and get the right piece of equipment from random loot.

Did you like the article? Share it!
Audio Video Minecraft Dungeons - The phenomenon becomes an RPG
The Complete Walkthrough of Broken Sword: The Secret of the Templars ❯

add a comment of Minecraft Dungeons - The phenomenon becomes an RPG