Nintendo OLED Switch is finally available in stores. The strength of the new model launched by Nintendo is the OLED display which, as you can read in our review, in addition to being brighter, allows you to have better contrasted images and brighter colors than the LED of Nintendo Switch Standard and Lite. . However this type of panel is much more susceptible to the phenomenon of burn-in, which can negatively affect the viewing experience.

In this article we will explain in detail what burn-in is and we will give you some advice on how to avoid or at least limit the occurrence of this problem on your console.

burn-in one intends a problem causing one discoloration or persistence of an image in one or more areas of the Nintendo Switch OLED screen and, in general, of monitors, TVs and devices that use this type of panel. Usually the problem occurs when a static element is shown on the screen for an extended period of time. A little as if this were "printed" on the display, thus leaving a temporary or, in the worst cases, permanent mark. For obvious reasons the burn-in effect is unpleasant to see and worsens the visual and gaming experience to a greater or lesser extent, depending on the extent of the problem. 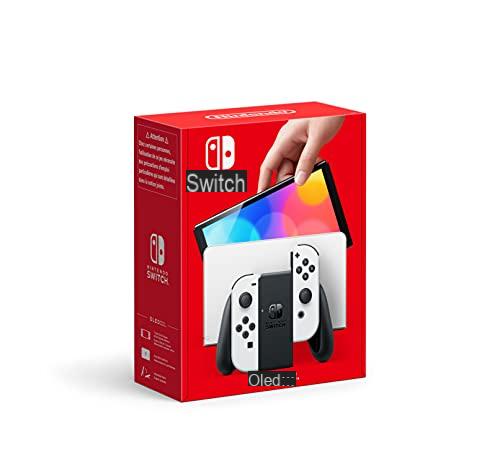 Burn-in is not a recent phenomenon. Even older CRT PC monitors could have this problem where the same image was shown on the screen for an extended period of time, which is one of the reasons why screensavers were born. The problem has then become even more widespread on plasma displays, now out of production, while LED ones are much less susceptible to burn-in, but compared to OLEDs they can have a lower color quality, especially as regards the management of sources. of brighter light and darker ones.

Burn-in, for the moment, is a problem that has not been 100% resolved. However it must be said that in recent years the new production processes and some precautions by the manufacturers have reduced the frequency with which this defect occurs on OLED screens, especially large ones.

The burn-in on the Nintendo Switch OLED: is there to worry?

Thanks to the improved production processes and the functions created ad hoc by the manufacturers of OLED TVs and monitors, it is unlikely that a product purchased in 2021 will present burn-in problems or it will be plagued with burnt or non-working pixels, especially on first start. However, this is mostly true when we talk about general use, such as watching movies and TV series, perhaps alternating with a few games every now and then. For those who have made video games their passion and therefore invest a large part of their free time with the pad in hand, then things change.

In fact, in video games there are HUDs that remain on the screen for most of the game sessions. We refer in particular to those static elements of the game interface which include, for example, the energy bar of your character or the contours of a minimap. These elements, which inevitably remain on the screen for prolonged periods, could cause the effect over time. And of course the concept also applies to the Nintendo Switch OLED and its display.

However, before creating unnecessary alarmism, we would like to clarify that the aforementioned problem does not necessarily occur when playing video games, but only that the probability is higher. Before an image is "printed" on the screen of your Nintendo Switch OLED in fact it could take years or even it may never happen. Much obviously also depends on how you use the console: do you always play the same game and only in portable mode? How many hours a day? And how often does the screen become static?

Let's take a practical example with an extreme case: if you play Mario Kart 1.000 for 8 hours (game chosen at random, just to give an idea) within a few months (therefore on average a high number of hours per day), only in portable mode, without ever changing the game or varying the type of content on the screen, then yes, in that case the risk of burn-in increases considerably. Still taking Mario Kart 8 as an example, the potentially problematic elements could be the token-shaped icons and the flag in the lower left corner of the screen.

We would like to reiterate that the example above is decidedly extreme and applies to a small number of players. If you aim for a "standard" use, playing at most two or three hours a day and periodically changing the title, then you should hardly run into problems. Furthermore, given the hybrid nature of the Switch, usually the average gamer tends to alternate sessions in portable mode with those with the console connected to the dock (during which the screen remains off), and therefore the probability of putting the panel "under strain". OLEDs aren't that high.

That said, it will be possible to ascertain the reliability of the screen of the new Nintendo Switch model only in the coming months and after intensive use. Also because the developers have created simple tricks to ensure that this problem does not occur frequently. In many games, those elements that seem immobile to us (the radar, the energy bar ...) actually fluctuate by very few pixels. It is a phenomenon invisible to the naked eye, but which allows the screen not to constantly have to show these elements in the same place on the display.

Tips to avoid or limit burn-in

Nintendo a few weeks before the launch of the Switch OLED reassured players about the longevity of the console screen, admitting however that this type of screens is susceptible to burn-in.

"We have designed the OLED screen with a longevity in mind as much as possible, but these types of displays can have problems if they play static scenes for long periods of time. However, users can take preventative measures to preserve the screen by using functions already present in the system. Nintendo Switch operating system, such as auto-brightness, which prevents the screen from becoming too bright, and the auto-sleep function, to turn off the console after short periods of inactivity. "

Taking the words of Nintendo as an example and what was stated above, for limit the burn-in phenomenon just adopt a series of good habits.

First, go to the settings and make sure you have activated the option "Automatic brightnessIn this way, the console itself will adjust the intensity of the brightness according to the environmental conditions, avoiding too high a value where it is not necessary. We do not recommend it, but if you decide to deactivate this option, at least avoid turning the brightness too high. The higher it is, the greater the effort of the panel, therefore the risk of image retension.

Another function that we advise you to activate is the automatic sleep mode especially if you plan to use the console especially in portable mode. Anyone happens to pause a game to answer a phone call or to watch a funny video sent by a friend: here keep in mind that in these cases the console will continue to display the exact same screen for several minutes. This situation is exactly what, more than all the others, increases the risk of burn-in. Thanks to the automatic sleep mode, your Nintendo Switch will go into stand-by by itself after a certain period of inactivity that you can decide for yourself (we recommend that you use the shortest period of time possible). After all, turning on the console again is a matter of moments and you can continue your game right where you left off.

However, it is also true that in online games entering standby mode in most cases involves logging out of the online functions and forcing you to log in again, losing the game in progress. For example, in Monster Hunter Rise this means having to re-enter the password to re-enter the lobby where your friends are. An inconvenient process, we realize. The choice obviously remains in your hands depending on your type of use of the machine but, having said that, try to avoid leaving the console on while displaying a static screen for too long.

Another good habit, in case you often try your hand at long game sessions or if you always play the same title for months, is to try every now and then to break the "monotony" of the images on the screen, for example by starting another game or maybe watching some videos with the YouTube application. A nuisance, no doubt, but with certain titles with almost infinite longevity, such as Mario Kart 8, Super Smash Bros., Fortnite and Monster Hunter Rise, this is a small trick that could extend the life of your Nintendo Switch OLED display.

To conclude, we would like to reiterate the fact that the phenomenon of burn-in is increasingly rare to find in the most recent panels and much less widespread than it might seem or than you happen to read on the internet. The problem exists, of course, but with a few small tricks you shouldn't run into problems. We hope you find our advice useful, and if you have any other suggestions, write them in the comments to this article to help all readers.

add a comment of Nintendo Switch OLED: how to avoid screen burn-in