Nioh Collection, the light of the samurai and the darkness of the Yokai

It is now well known that the periods related to entertainment are quite canonical from year to year: we have passed the post-apocalyptic phase, we have seen how every now and then the Cyberpunk theme tries to get back on top, but if there is a theme that now works Japan is certainly better than others. Obviously we are not talking about the island but about its culture, which has appeared almost everywhere in recent years. Therefore, it was never a better time to publish a collection of two titles that are proud of their origins, namely Nioh and Nioh 2. Although the most recent chapter was released a short time ago, the first of the iteration instead has its years and, unfortunately, its technical shortcomings. There Nioh Collection proposes these two cornerstones of the genre complete with DLC (all six) and next-gen functionality in one package.

The developers have always prided themselves on historical accuracy - although obviously the game has fantasy tints - and both chapters lend themselves very well to players who, eager for a soulslike (clearly inspired by Dark Souls), want to depart from the works of Miyazaki and try something different. In fact, if many try in vain to replicate this genre, Nioh is among the few to have succeeded with courage, also proposing original dynamics.

From a practical point of view, the real gap between the original version and Remastered is much more evident in the first Nioh: the colors are much more vibrant, the details richer and the game modes. (120 FPS, 4K e Standard) manage to overcome those limits that the original game, designed for PlayStation 4, could not cross. The gap is especially noticeable between the cutscene and the game: if the latter has in fact undergone an exceptional restoration, the videos have improved slightly, showing some weaknesses (obviously not due to the console).

Nioh 2, on the other hand, suffers less of the wonder effect: the game had already been designed for PlayStation 4 Pro and for this reason the detachment, albeit present, is less evident. The graphics modes are the same, and for newbies the experience will be of the highest level; the peculiarity however remains in how the two games, if taken on par as regards the technical part, seem similar in many respects. Obviously the main criterion that makes them children of the same concept is their connection with Japan and its history.

As for the plot, Nioh proposes a very linear story: under the command of William, an Englishman who arrived in Japan during the Sengoku era, the title tells a not too original plot, but useful enough in pushing you forward towards the end of the title. The practice does not change with Nioh 2, which this time tells about Hide and his story (despite the fact that the character is completely customizable).

Speaking of gameplay instead, the two games stand out for their attention to detail: the way of fighting, the weapons used and even the style of play will influence the game, pushing the player not to follow the rules dictated by the game, but giving him the chance to create your own. You can then choose whether to take advantage of close-range attacks, counterattacks or simply, bet everything on special moves and so on. Nioh 2 adds some new features: meanwhile, the character will be completely customizable, both in terms of aesthetics and the build given by equipment. In addition, Hide will also be able to make use of Yokai powers: being half human in fact, he will be able to exploit the defeated enemies to steal their powers and use them during the fight.

I played Nioh Collection on PlayStation 5 thanks to a review code sent by Sony PlayStation Italia. 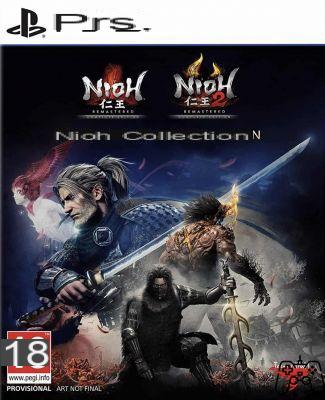 Finally, The Nioh Collection proposes the 6 DLCs, three per game, all dedicated to history and with a longevity higher than the average of the classic additional contents: for this reason this collection is the best way to approach the game in case you have never put your hand on the saga. On the contrary, if you have already played all the contents, the choice will be valid only if you are a big fan of the series, otherwise what you will have is a collection of two games released on PlayStation 4 with some improvements, nothing more.

Obviously the offer becomes greedy even for those who have not put their hand to the DLCs or have not cleaned up the two chapters well: for this reason, all in all, the choice of this The Nioh Collection is a winner.

A well done remastering, which manages to showcase details that were not so defined in the originals. The difference between Nioh and Nioh 2 can be seen, especially given their age, but all in all this boost allows the two games to reach the same level.

Every moment and every single corner of the map would not be suggestive if the music were not as well structured; the same thing can be said of the sounds, managed in a valuable way especially in the combat phases.

One of the few soulslike that has managed to stand out from the crowd: if there is something to which it owes its success, it is the gameplay, unique and original albeit heavily inspired by the works of Miyazaki.

Did you like the article? Share it!
Audio Video Nioh Collection, the light of the samurai and the darkness of the Yokai
The Last of Us: Left Behind walkthrough ❯

add a comment of Nioh Collection, the light of the samurai and the darkness of the Yokai