I don't want to lie to you: before now, I had never touched a single chapter of the series starring the legendary one Phoenix Wright. But not only that, the idea of ​​approaching these games had not even crossed my mind until this one presented itself, which I would define the perfect opportunity.

Since I was a child, mainly through TV, I have always suffered the fascination of police investigations and brilliant lawyers who did surprising things in court to save their clients. And many of these sensations I really felt by playing this collection, especially in the moments when I had to work hard to be able to understand at all costs what was escaping me from under my nose, how I could do to save my client in tears and terrified of capital punishment. And it was moments like that that made me understand how this saga became a cult for so many players around the globe and how the revival of the first three chapters of the series, at a very advantageous price and with all the necessary improvements. - Italian localization, alas, aside - was a smart move. Certainly some old passionate will return 'to the scene of the crime' and will be seduced by this re-edition but many others, like myself, who for one reason or another had never approached before, will finally be able to discover it.

Come on Wright, think carefully about your next move, the fate of your client depends on that!

Once launched, this one Ace Attorney Trilogy welcomes us with the classic screen that allows us to choose which of the three included titles to play. The style of the series is all peculiar and follows a rather simple but equally effective structure that starts from the subdivision of the chapters into different cases or episodes. Among these there is exactly the same consequentiality that can exist between the different episodes of a TV series of this kind: each investigation or discussion in court is independent but can present references to the protagonist's past or elements that come back into play. For this reason, the episodes can only be tackled in the order predetermined by the developers and, as we proceed, they become more and more nuanced and complex to complete. However, to meet me and all those who have never approached a title of the saga, the game offers at the beginning an excellent interactive tutorial to briefly illustrate how the procedure in court works and what are the 'weapons' at our disposal.

This is because the game's structure unfolds between a visual novel and a graphic adventure filled with puzzles and riddles to solve. The incipit is used to present the case and sometimes the characters who are at stake, from there our investigation on the field takes place, the interrogations up to the confrontation in court in front of the magistrate.

It takes very little to get into what is Phoenix Wright's logic and fully understand what a process works and how we can try to get the most out of each witness but it is not so easy to be able to master every situation. This is because the title offers a difficulty curve that rises quickly and requires a lot of concentration to the user, who must try to keep an eye on both the information already in his possession and everything new to him. flows in front. For this reason we would unfortunately advise against the purchase to all those who do not have a good command of English as it is of vital importance for the resolution of any diatribe, objection or cross-examination to perfectly understand the context in which it takes place. the action and tone used by the characters in dance.

A painstaking investigation will come in handy in the classroom, trust me!

To make a good impression in court, however, it is necessary to carry out an excellent investigation first and that is why it is essential to explore the various environments, even at different times, to try to steal every detail hidden at the crime scene or in other places of interest. . The style with which each environment is designed is very pleasant to see and shines thanks to the re-edition in high definition when we play on the TV but it is still appreciable also on the Switch screen. And it is precisely this mode of use that I preferred for my gaming sessions as it allowed me, not only to play comfortably lying down or around the city but also to take advantage of the touch screen to touch each point of interest rather than moving the cursor using the Joy-Con analog.

But nothing is as unpredictable and fun as witnessing a witness being deposited in court: in that moment, it all comes down to a question of dialectics and timing, and our every wrong move could jeopardize the whole case. Anyone who is called to testify, after he has given his testimony, can be cross-questioned by us. We must therefore make a local mind and try to think differently about the evidence we have in hand and the theories we want to verify. It is our right to insist with other questions as the testimony progresses, to induce the witness into contradiction or to present some of the elements gathered during the investigation to contradict his word.

Thus begins a real dance between accusation and defense, with the moderation of the judge, with strokes of "OBJECTION!”And counter-testimonies, in a real ballet that never spares a few twists. The truth is never trivial or easy to prove and requires a good deal of intuition on the part of the player but also a lot of perseverance in trying to prove that our thesis is the right one. The cases or, more generally, the narration we witness are often a bit stereotyped and present the usual ways of doing or the expressiveness of Japanese animation that we know well but that does not mean that they are boring or repetitive. Also because, it is not just trivial murder cases but the thriller style is always very strong and can sometimes be enriched with moments that focus on the paranormal.

Therefore, it can sometimes be useful to pause the game, which lends itself very well to the hit and run style of Switch, and think a bit about what we have found and try to think about the story in a different way. This doesn't want to be an exaggeration: some cases you will face will be particularly difficult to complete, full of details, characters and places to investigate thoroughly, so even taking a break and rethinking the game while you are doing other things can be useful. On the other hand, if a game that presents puzzles or riddles to solve manages to capture your attention even when you are doing something else, it means that it has style to spare.

The successful series starring Phoenix Wright finally lands on Nintendo Switch thanks to a substantial collection of the first three games in the series (14 cases to be solved). 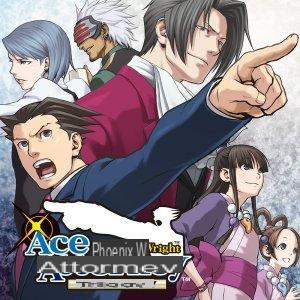 Phoenix Wright: Ace Attorney Trilogy is the re-release I've been waiting for to try out for the first time a series that I've found to be as peculiar as it is fun. At a rather low introductory price, you can take home three games for a total of almost fifteen total cases to be solved., packaged in a Full HD version available for Nintendo Switch, PS4 and Xbox One. Definitely a nice memory to refresh if you have already played them years ago, a gem to discover for all new users.

The re-presentation in high definition of the first chapters of Phoenix Wright does not stand out particularly for novelty or unpublished graphic elements but still manages to make every moment of the adventure shine, both in portable mode and on TV in 1080p.

Unfortunately, the localization in Italian is completely missing, as it was absent in the original version. We would have liked to have received, together with French and German, an update that also includes our language.

The game has aged very well and still has a peculiar and fun style today. The adventure then lends itself excellently to the nature of Nintendo Switch, allowing very short and not particularly demanding game sessions on the move and facilitated by the use of the touch screen.