One Piece: World Seeker - Nothing beyond the hedge

Awarded for eleven years in a row as "The best-selling manga in all of Japan", One Piece has exceeded the 450 million copies all over the world (380 of which only in the Land of the Rising Sun), guaranteeing access to the Olympus of comics and becoming a real cult phenomenon. Inevitable, therefore, that many software houses have decided to put their hand to the brand, in an attempt to replicate its success even with a different language. We're not here today, though, to analyze Omega Force's work with their musou series, but we want to talk to you about One Piece: World Seeker, action adventure developed by Ganbarion and recently landed on the shelves of 4 PlayStation, Xbox One and PC. We admit it: the fear of finding ourselves in front of a superficial and not very refined title was great, but the latest gameplay videos showed a fair care in the combat system and graphics with an undeniable charm for lovers of the work of Eiichiro oda.

Do you want to know how it turned out? Just keep reading to find out!

One Piece: World Seeker, unlike other titles related to the brand, makes the narrative sector one of its strengths. This is thanks to a solid script which, supervised by Eiichiro Oda, manages to conquer and stage a plot full of exciting moments and charismatic characters. The story sees Luffy and his band of pirates shipwrecked on an island where there is a strong conflict between two factions: one pro-navy and the other anti-navy. Here the Straw Hat crew will get acquainted with Jeanne, girl leading the resistance and in conflict with Isaac, supervisor of the entire island and equipped with robotic limbs. These two new characters, in our opinion, are the most successful of the production, with a psychological characterization perfectly in line with the manga and endowed with a personality that, we are sure, will be appreciated by Oda fans. As for Luffy and his friends, there is nothing particular to report; we are faced with the same characters who made the comic and the animated series famous, with all the typical attitudes we have learned to love (or hate).

Despite a solid script, however, we have found the story too diluted and often cumbersome, with a smaller dose of cut-scenes than would be needed to engage the player. Many important dialogues, in fact, are relegated to the chatter between the various characters, which not only do not give the right expression to the scene, then always using the same animations, but which are not even dubbed, limiting the Japanese voices of the exchange of words to a simple sound useful for understanding the tone of the conversation. There are also a number of secondary missions which, in some cases, will allow us to meet old characters from the world of One Piece, but which, at the plot level, are almost always poor and devoid of charisma.

Summing up, One Piece: World Seeker stages a certainly interesting story, but one that suffers from a subdued direction and a lack of attention to detail. Nothing disastrous, but we could have expected better.

ONE STEP FORWARD AND TWO BACK

As regards the gameplay, One Piece: World Seeker alternates excellent ideas with slips to the limit of the unforgivable. The entire combat system is based on thealternation between Kenbunshoku and Busoshoku, guaranteeing speed and precision in the case of the first style and greater strength and defense in the second. While on the one hand we will be able to dodge bullets relatively quickly, in fact, using the other style we will be able to parry ourselves and deliver powerful blows capable of quickly knocking out our opponents. This idea, as simple as it is perfectly integrated with Luffy's abilities, however, suffers from the scarce amount of usable combos (one per style) and the impossibility of switching from one style to another during the action, forcing us to finish the shot and thus slowing down the action (a lot).

Another element of the combat system that bothered us was not being able to hit enemies on the ground, which forced us to constantly wait for our opponents to get up, and then be able to launch a new combo (at the end of which they would still fall to the ground). You will understand that, especially with enemies with a consistent life bar, the thing takes on a tone tending to ridicule.

Leaving aside the choice of Ganbarion to let the player use only Luffy (which he may like or not), we would also like to criticize the poor variety of antagonists, really too similar to each other and unable to embody a real challenge for the player. Even bosses (or mini bosses) are easy to defeat and, given the woody combat system, not very exciting to deal with. On the other hand, the possibilities given by the Straw Hat movement are excellent, which make the exploration of the island really fun, although the inability to hang on to the natural holds is immediately quite stupid.

Too bad that, hand in hand with the wonder of exploration, you quickly come to terms with the total lack of content.

Beyond the secondary missions (often very similar to each other), the only other reason to explore the game world is to recover all the objects scattered around the map, but you never really get the feeling of living in an environment that is alive and responsive to our presence. Few NPCs (despite the large number of houses), few interactions with the elements of the scenario and the constant presence of empty areas fail to convey the right feeling to the player, who runs the risk of getting bored within a few hours.

We appreciated, however, how some secondary missions are used to raise one karma bar linked to new and old characters that we will meet throughout the story. Nothing new and / or innovative, mind you, but for a fan of Oda's work this could be a significant added value. There is also a upgrade system using accessories, which can be found by completing quests or created through some members of the Straw Hat crew. The aforementioned items provide various kinds of power-ups, in order to give Luffy the ability to easily face even the most dangerous opponents.

We admit it: on a technical level we were completely impressed by the work done by the guys from Ganbarion. The ambienti are wonderful to see and, despite the low number of animations (facial and otherwise) of the characters, even the polygonal models of the latter can be considered of excellent workmanship. The color palette, very close to that of the anime, helps to create a world in which the player is pushed to explore, to then collide with the lack of content that we analyzed in the previous paragraph. The dubbing in Japanese is also good accompanying the cutscenes (impossible to save or share due to copyright issues), but which we would have preferred to also accompany the many dialogues during the gameplay. Unforgettable the soundtrack which, while being appropriate in some moments, it has no noteworthy traces and is forgotten as soon as the console is turned off. In the course of our adventure we encountered no technical problems of any kind, managing to roam around the island without the slightest drop in frame rate.

We played One Piece: World Seeker on PlayStation 4 Pro in its digital version which, at the time of writing, weighs 14.27 Gb. 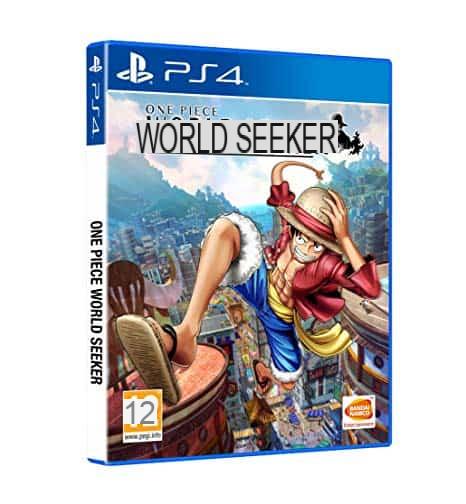 One Piece: World Seeker is a mediocre product, capable of conquering fans of the Eiichiro Oda series, but far from the playful standards to which the market has accustomed us in recent years. It is also annoying how each step forward for Ganbarion corresponds to two steps back for the development team, which has failed to deliver a fulfilling combat system and a game world that is alive and worth living. We are faced with a product that can certainly be a valid starting point for a series (with the necessary changes and implementations), but which, unfortunately, we would like to recommend only to Straw Hat fans. For those looking for a well-finished and well-finished action adventure in all respects, however, we suggest looking elsewhere.

An island as beautiful to see as it is empty to explore. The environments are all well cared for and the polygonal models of the characters certainly successful. Too bad, however, that this is damaged by a really subdued animation set (when present) and by the total lack of interaction with the game world.

Good Japanese dubbing, however, present only in the movies and in the form of a sound in the first part of the dialogues, which remain for the most part silent. Different speech for the soundtrack which, although not disastrous, manages to be easily forgotten once the console is turned off.

One step forward and two steps back: the gameplay presents very interesting elements, but damaged by truly inexplicable choices. A solid starting point for a product that, if perfected, could really give Eiichiro Oda fans a lot.

Did you like the article? Share it!
Audio Video One Piece: World Seeker - Nothing beyond the hedge
Microsoft Flight Simulator 2020, a real pilot's review ❯

add a comment of One Piece: World Seeker - Nothing beyond the hedge