The fourth year of Rainbow Six Siege add-ons is drawing to a close, and with this year's penultimate expansion Ubisoft has been trying to rise from the not-so-brilliant Operation Phantom Sight. To understand if the development team has managed to propose a better season than the previous one and to prepare the ground for a good closing of year four, let's analyze the contents of Ember Rise and their impact on the game.

As has already happened for other maps in the past, not least Café, also the historical Kanal map has seen a rework, both aesthetic and structural, to return once again to being competitive. The map scenery has been updated to a more modern NATO base, with submarines in the nearby canal and various offices and equipment inside.

The supporting structure has mostly remained the one on three floors (basement, ground floor and first floor) that was already known, with tweaks and additions to various rooms and corridors to improve their playability. An example of this was the addition to the first floor of a further bridge connecting the two main buildings (to improve navigability), or the inclusion of a hallway outside the boat room, to make the site in the basement defensible. .

The good thing about this modernization of the map is that at the moment three out of four sites are playable and some sort of strategy can be set, even if all is not going well. Although many of the problems that plagued the map in the past, such as poor navigability or some untenable sites, have been resolved, others persist and are only slightly mitigated.

In the various games played on this map I have not noticed a great possibility of setting complex and varied strategies, both for attack and defense, but the different rounds were resolved, for the most part, with a single basic strategy, which often resulted in a bloodbath. Even considering the relative novelty of Kanal in this version, it must be said that maps such as Outback and Café have proved to be more valid and intriguing since the first games played and still offer more outlets to set strategies of various kinds (Café is also been inducted into the Pro League among other things).

The general feeling is that, despite the various changes, Kanal is still tied to its old skeleton and to that setting of the first maps of the title, which forced the firefight at all costs. I think it's still early to say whether or not this map deserves to be among the competitive Rainbow maps, but it's certainly one of the least fun out there.

From Mexico to Peru

As usual, Ember Rise also adds two new operators to the Rainbow team, with Amaru (attacker) and Goyo (defender). Although it immediately stands out that even for Ember Rise weapons already existing in the game have been recycled, as was the case for Phantom Sight, here we can consider mitigating factors, which make the choice less indigestible.

The first extenuating circumstance is of a managerial nature of the title, as Ubisoft has made it clear that the choice to recycle weapons has become an obligatory move. According to the developers there aren't many weapons left that can be taken and modified for the game, moreover, with the variety of guns available to players, introducing new weapons very similar to the previous ones makes little sense. In light of this motivation, it is more reasonable to postpone new weapons for the time when they really make sense of being included in the game.

The second mitigating factor is instead of a technical nature. If with Phantom Sight the weapon choices for the two operators could be somewhat questionable, in Ember Rise the choice of guns has been much more careful and offers a new perspective on weapons already established for certain roles and characters. In this case, both Amaru and Goyo are both equipped with weapons perfectly in line with their gadgets and with the roles they can take in the strategies of the players, having everything they need to work at their best.

As for the kits of the two operators, Amaru is equipped with two shotguns (the supernova of the SAT as primary and the ITA12S of the GEOs as a secondary), and two fast rifles (IQ's G8A1 machine gun as primary and the SMG- 11 of the SAS as secondary). The choice of this particular type of equipment is dictated by the fact that the shotgun, as a secondary or as a primary, goes particularly well with Amaru's primary gadget, namely the Garra hook.

The Garra Hook is a gadget that allows Amaru to grapple very quickly at windows and ledges outside the map, or to climb through previously broken hatches, which was not possible in the game until now. The combination of Amaru's gadget and his arsenal allows the Peruvian striker to be quite independent and to adopt new types of approach to goals.

In addition to the fun of launching through a window at full speed, Amaru allows those who know well the maps to attack from the bottom up, or to place the defuser under a hatch and immediately climb up to cover from above. Clearly these are nuances concerning the role of Amaru, which may outline his effective usefulness in a competitive team, but which do not affect the enjoyment of this operator.

To this we can add that, although one can think of Amaru as an unbalanced operator, the Garra hook has its drawbacks. When Amaru uses her gadget, she not only produces a loud noise, easily audible to enemies, but she is unable to grab the rifle until the landing is complete. This limitation means that Amaru must always enter rooms without opponents in order not to be an easy target of the enemies and thus give a kill.

On the other side of the fence is Goyo, an operator with two armor and speed and a very peculiar kit. Not only does Goyo's arsenal include two primaries typically associated with heavy defenders (Mira's Vector and Kaid's Tcsg12, with Acog attached) but it has a particularly useful gadget for slowing down enemies.

In Ember Rise Ubisoft has revolutionized portable shields, equipping them with slots with bulletproof glass to see through the shield, and Goyo has three very special ones. From the outside these shields look the same in all respects to those of the other operators, but behind they mount an explosive tank that explodes when hit or the shield destroyed, causing damage and releasing area flames for a few seconds (like the arrows of Capitao ).

Both the weapons and the shields make Goyo a very powerful operator, but one that is not suitable for all players. Controlling the two primary weapons is not easy and shields must be placed correctly, as the flames caused by their explosion can also damage allies and pose a problem for defenders, rather than attackers.

In support of the considerations on the map and on the operators, there would be another noteworthy element added during this operation. As previously mentioned, the development team has modernized the portable shields making them more competitive and important as a means of obtaining information, also improving their positioning on the doors. As things stand, the attackers are forced to have to carefully consider any enemies behind a shield in order not to run into painful deaths. Seeing as the shields were previously more frustrating than useful this is a good improvement, reviving a historic R6S gadget.

Also noteworthy is the situation of the DoS attacks that have infested the servers in the first part of Ember Rise. While it initially seemed like Ubisoft couldn't do much against these disruptive actions, things changed dramatically in the second half of the season. The countermeasures already taken and those to come are many and all very hard (from a strengthening of the servers, up to the ban of accounts that carry out DoS or similar actions) and this bodes well for the next seasons and for their peaceful development.

Operation Ember Rise is divided between the Kanal base and the moors of Peru and Mexico, thanks to Amaru and Goyo. The map is not among the most successful of recent times and seems to be anchored to the problems that have always plagued it, although some of them have been solved. It is certainly more playable than in the past, but it seems that there are not many alternatives to direct firefights between forwards and defenders.

Operation Ember Rise brings the rework of the Kanal map, as well as two new operators. The attacker Amaru and the defender Goyo. 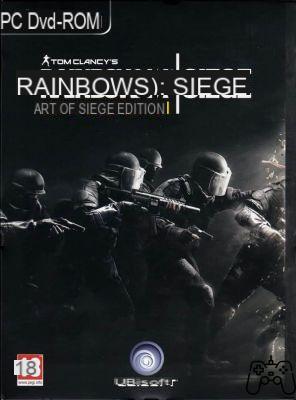 Amaru and Goyo are two really cool additions to the Rainbow team and this time around the weight of the recycled guns doesn't feel like it used to. The choice of arsenals for both operators is apt and functional to allow them to carry out their style of play without problems. Amaru figures as an operator suitable almost exclusively for experienced players, who know the maps and who have a plan to use it to the fullest, worth one less member in the team. Despite this technical limitation, the operation of the Garra hook is very intuitive and incredibly fun, especially considering that flying at high speed was something never seen in Rainbow before.

Goyo is more affordable than her colleague and mentor, but requires more mastery in handling her two primaries. The fact that these two weapons were previously the prerogative of heavy operators, even with an Acog mounted on one of them creates a very interesting situation. Goyo's shields are a valuable tactical element for defending teams and, if used correctly, can become a nightmare for attackers.

In conclusion, we can say that Ember Rise is a successful and fun operation, although not free from some defects. The Kanal map is certainly not among the best released in recent times, but Amaru and Goyo certainly make a really interesting addition to the title. Between the two, Goyo is the one with the most chance of winning the meta in the seasons to come, but certainly Amaru is no less fun to play and may have something to say in the right hands.

Amaru and Goyo have an interesting design, but nothing that really stands out, like the Kanal map. Although the new design goes well with the concept of a NATO base, there are no environments worthy of note.

As always, the dubbing of the two operators is on point, but nothing particularly memorable.

Amaru and Goyo present interesting and fun gameplay. Too bad for the map that does not fully convince and does not seem very open to varied and complex strategies.