Needless to turn around, Star Wars: Jedi Fallen Order it's not a perfect game, and it's not the masterpiece that Star Wars fans have been waiting for. The game of Respawn Entertainment however, it is a real treat for fans and is by far one of the best video games dedicated to the Lucas saga of the last decade.

Set a few years after the Jedi purge began, Fallen Order tells the story of the young man Cal Kestis, a padawan who became a wrecker on the planet Bracca with the firm intention of hiding from the empire. After a few moments of excitement that leads him to expose himself in front of an inquisitor, the breakneck escape becomes the only viable way.
Thus begins the story told in Fallen Order. It goes without saying that it's not just about running away for the duration of the game. Cal will soon find a specific purpose, a mission of extraordinary importance that could even lead him to restore Jedi order.
To do this, he will have to follow in the footsteps of the Jedi master, Eno Cordova. Once on Bogano it becomes clear that, to recover the mysterious artifact that Cordova speaks of in his holomessages, it will be necessary to visit other planets, challenge the empire and discover the mysteries of ancient peoples.
Fortunately, on Bogano we learn not only about Cordova, but also about the very tender BD-1 droid.
BD-1 will soon become a vital companion of Cal, helping him to deal with enemies, activate switches, slide on ropes and a half infinite number of other utilities and functions, increasing the bond between the two more and more. Making them inseparable and confirming themselves as a dynamic first-rate duo. The narrative needs will lead Cal to team up not only with BD-1 but also with other characters who, despite not shining for thickness, manage to convince and, sometimes, to entertain.


Although the story does not have particular twists or who knows what ideas, it manages to thrill and keep pleasantly glued to the screen for the duration of the adventure, and then burst and excite in the final phase. It also allows you to travel and explore planets like never before in a Star Wars game: Kashyyk, Dathomir, the aforementioned Bogano, Zeffo. Being able to visit these places (and others), discover their secrets thanks to the echoes of strength - one of the game's collectibles - and delve into the legends of a saga as deep and varied as that of Star Wars, is something for which every fan could foaming with joy, and Fallen Order allows you to.

Rise of the Zeffo Tomb Raider

The planets are a real level design manual. Not only do you have the honor of visiting some of the most iconic (and mysterious) planets in the imagination of Star Wars, but it is done with an absolutely rare gaming pleasure, thanks to a formidable lever design and structured by surprisingly detailed maps, varied and full of shortcuts and secret passages. Speaking of shortcuts, as you progress through the maps of each planet, it will be possible to open roads that greatly facilitate re-exploration. Since there are no checkpoints, if not the meditation points we will talk about later, opening passages that simplify and facilitate a second step becomes an essential routine. Each map also hides an infinite number of secrets, treasure chests, upgrades and various collectibles. Although the plot reports at least one more time on each planet, the variety of settings, the possibility of creating shortcuts and the new roads opened by the new acquired powers, make backtracking never invasive or frustrating.

As in the best Unchartedian tradition, exploring does not mean walking between one street and another, but you have to jump, climb, run, swing, climb and all those things that make the protagonists of adventure video games of professional decathletes.
Although the game performs well in most situations, it often happens to miss a platform or a dangling rope due to some inaccuracy in the jumping system, not always in line with the player's thumbs or intentions. To mark this problem we think the (overused) sliding sections, where the speed and the slope of the ground tend to make Cal jump in unthinkable directions.
Cal will also have to face a series of environmental puzzles, always well thought out and well placed in context. Attacking thorns, moving objects by force and slowing down platforms are just some of the gimmicks used in the various puzzles to be faced between fights.

Abandoned the jumps and the puzzles you find yourself drawing the lightsaber. The combat sections are not based on a Batman-like system as you might expect, allowing us only to press the key at the right time and then load the unfortunate turn of half an infinite number of swipes.
The system designed by Respawn for Fallen Order takes full advantage of the mechanics of games like Sekiro. Also with regard to the difficulty.
To face every single enemy it is in fact necessary to prepare calmly and play guard and attack with the right timing. Once an enemy's guard is broken (be it a clone or an alien monster), it becomes possible to damage it. Blocking and attacking at the right moment is essential in practically any battle. Lacking a leveling and stat growth system, every enemy is potentially a threat right from the start.

By defeating enemies and recovering the echoes of force scattered around the planets, experience points are earned, these points can be spent on improving Cal's techniques, his health and the amount of force that can be used in battle.
Another characteristic is also inherited from the Souls: the meditation points. In these points it is possible, in fact, to access the skill tree, create a restore point and heal yourself. Yes, because with the exception of the stim (medkits) that BD-1 can give, to restore health it will be necessary to meditate in one of these points. However, if you do so, all defeated enemies also return. Just like the Souls then, every time an enemy defeats Cal, all the accumulated experience is lost, re-obtainable by killing the enemy guilty of the crime, but not before being restarted from the last activated meditation point.
A system that hides lights and shadows, the one chosen for the fights and meditation points. If on the one hand it gives the game an enviable depth and difficulty, on the other it breaks the rhythm and risks incognito a good slice of players.

Unfortunately, although the system works very well, the poor accuracy of the animations and an unhealthy management of attack / defense times often make you invoke the mother of the enemy in a bad way. In fact, the system is often imprecise both on the direction of attacks and on the accuracy of dodging and parrying. Nothing too troubling, but greater cleanliness and fluidity would have been more than appreciated.
Fortunately, Respawn has provided four difficulty levels to suit every player: Story mode, Jedi Knight, Jedi Master and Jedi Grand Master.
Personally, to enjoy the game and not feel inept even against any Stormtrooper, I opted for the Jedi Knight mode, finding it rather balanced and never too demanding.

I've played Star Wars: Jedi Fallen Order on PlayStation 4 Pro and risked throwing it at the TV on more than one occasion. 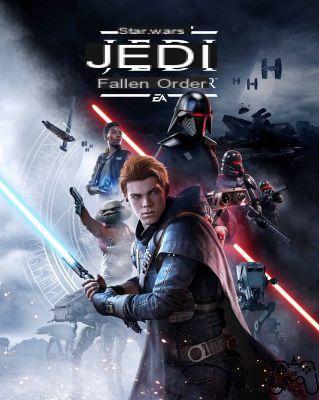 Go around the galaxy in Fallen Order it is a pleasure for the eyes and ears. Net of some imperfections on the animations and some expression of a damaged potato too much, the general technical performance is certainly in step with the times. On PlayStation 4 Pro it does not reach the heights to which other games have accustomed us, but the visual impact is still remarkable, especially as regards the planets and the excellent realization of the terrains and materials. Another matter, as we said, is for the animations that are not always precise during the battles. Movement inaccuracies in some animations sometimes make fights more chaotic and confusing than necessary. The final feeling is definitely that a little more general cleaning wouldn't hurt the game at all.

Another speech for the audio sector, with a very good dubbing in Italian (even if the adaptation is not always impeccable) and with an impressive soundtrack, thanks obviously to the classic themes of the saga.
The sound direction has the merit of always being on the track, giving sound escalation always at the right moment. So good. Also interesting is the presence of a couple of alien rock songs The Hu, a rock band from Mongolia.

Force is powerful in your child, it just doesn't apply

After the bitter bankruptcies at home EA with video games dedicated to Star Wars, with Fallen Order it is clear that the intent was to go without fail. How to create an adventure dedicated to the distant Galaxy, far away par excellence, without risking to create something that the public did not understand or something “too different”? Simple, just look at the most successful games of recent years and trace your own. Right from the start, you notice how much Fallen Order is a carbon copy of the best exponents of the genres to which it refers. As for the exploratory part it is impossible not to notice the similarities with cousin Nathan Drake da Uncharted, but also Aunt Lara Croft's features become more and more evident as the game grows.
When it comes to fighting, however, the closest relatives are undoubtedly Sekiro e Dark Souls.

In short, it will also be a little derivative, but it must be said that the Respawn team went to fish from the best of the best, not from unknown games.
This derivative vein, however, translates into a pleasantly solid game, its being based on tested and more than appreciated systems gives the game a granite foundation, on which it is impossible to make particular notes or highlight critical issues. Where things start to go wrong, the problems are mainly due to the technical flaws that accompany the whole adventure of the young Cal Kestis.
Probably a little more courage would have allowed us to link the two souls of the game with some ideas that would give depth and personality to the whole experience.
Both the public and EA / Disney now needed a game that finally hit the point and lifted the curse that seemed to loom over Star Wars games, and Star Wars: Jedi Fallen Order hits the mark.

As beautiful to see from afar as it is imperfect and not very clean up close and in the animations. However, it remains a beautiful sight and an excellent rendering of the planets, materials and light effects.

Very good dubbing, with only some adaptation problems. Soundtrack based on Williams symphonies, needless to say more. The musical direction is also good, evocative and always on the piece.

The two souls of the gameplay do not always coexist in harmony and some inaccuracies on the animations often make the game vaffanWookie send both in fights and in exploratory fights. However, the work done is more than good and the feeling of fighting with a real lightsaber is really rewarding.

Did you like the article? Share it!
Audio Video Star Wars: Jedi Fallen Order, the unstable balance of the Force
All fossil Pokémon that you can revive in Oreburgh Mining Museum in Pokémon Brilliant Diamond and Brilliant Pearl ❯

add a comment of Star Wars: Jedi Fallen Order, the unstable balance of the Force