I've been trying to write this review for weeks, but never succeed. For one reason or another as soon as I start I see that cursor flashing on a white field and I freeze. It is as if Starlink: Battle for Atlas spoke to two different Roberti: that of 1997/98, forced two months in a country house in the company of a Lylat Wars for Nintendo 64 stripped to the last secret, with perfect matches, and that of almost forty years with dependent children, a beautiful wife - latu sensu - and an exciting job. In the second Roberto, now back to his first love, the turn-based strategy, the fire that burned for Fox McCloud and his team is still blazing. Behind him, at this very moment, stands out the entire collection of ships produced by Ubisoft for Starlink, including limited editions for foreign markets and the Airwing for Switch despite the fact that he does not own that console. He played both the PlayStation 4 and the PC version of Battle for Atlas via Uplay, falling in love each time with that control system as simple as it is immediate, with those landscapes saturated with colors and wild beasts, with the characters who give voice to the story directed by Laurent Malville, Creative Director of Ubisoft Toronto and, more generally, from that caricatured arcade atmosphere that has always been a selling point of the Nintendo brand.

In reverse, the seventeen-year-old Roberto did not have an endless backlog, he was not sucked in by dozens of announcements and news as happens today thanks to the internet ... but above all it attributed to each IP purchased a value that has now been lost and was summarized in "what you had and what you played". My not being able to write about Starlink stems from this strong emotional contrast: the nostalgia for a time made of forced repetition but full of meaning versus the drive of which we are all victims that pushes us to search for the new, the different, the unknown. somewhat as Jacques Lacan (1901 - 1981) explained to justify the increase in marital separations with post-modernity. After the trailer I will try to explain to you why, in my opinion, Battle for Atlas is the perfect video game to embody the infamous 75: the vote that is given to those titles that have the potential to outperform the competition but that hide it waiting for someone to find out.

Eight months after its publication, I think it is of little use to dwell on the particular market segment in which Starlink would have liked to place itself, namely that of toys to life already occupied by the various Skylanders of Activision, Disney Infinity and Lego Dimensions of Warner Bros., even if only because none of these competitors (since Nintendo's Amiibo compete on their own) was already sailing in good waters at the time and that Ubisoft itself, due to poor sales, was forced to stop the production of spaceships and accessories to be hooked to the pads of PlayStation 4, Xbox One and Switch last April. Equally marginal is specifying that Starlink is not a shooter tout court, but a sort of No Man's Sky zipped and stuffed with a well-scripted narrative. The context is that of an alien discovery in Antardite that leads Professor Victor St. Grand to build a warp spacecraft - the Equinox IV - to explore the Atlas system in search of a mysterious object. At his heels is Commander Grax and his Cursed Legion, intent on stealing the secret of Nova's production: a new form of energy synthesized by St. Grand. Things turn out badly for the land expedition and the professor is kidnapped, leaving the other team members to rescue him and uncover the mystery of the Guardians' escape from the seven (eight ?!) planets of that solar system.

In terms of writing, Ubisoft Montreal's work does not depart from the canon of the genre: a light plot, with caricatured protagonists, certainly effective in tickling the imaginary of the player made up of archetypes: from the disciplined western officer to the oriental warrior with a sense of honor and justice, passing through the punk mechanics full of muscles and reckless teenager driving an electric blue ship with a monkey crest. Works? Yes, it works, it is immediate, it intrigues what is necessary to keep the curiosity alive also accomplices of the secondary missions that deepen lateral aspects of the characters, providing a context with a broader meaning. Nothing comparable to the storytelling of a random Mass Effect, it is clear, but in his following in the footsteps of Star Fox it is undisputed to say that Starlink does his (and good).

in its following in the footsteps of Star Fox, the Starlink storyline does its job

As for the game mechanics, if we exclude the cutscenes, time passes aboard the spaceship chosen to face the mission. You can change with the others available when you want, including the paraphernalia consisting of about thirty trinkets different in terms of rate of fire, damage, range, energy consumption and element of belonging that affects, according to the principle of "scissors, paper and stone ”, in the ability to offend an opponent or not. It is not an exclusive approach, really, then in most cases, choosing ice weapons to take down enemies who suffer from it is only advisable. In the vanilla version there are enough customizations to indulge ad nauseam, so any microtransactions to buy all the possible combinations remain at the expense of those who usually get caught up in the most thoroughness. Also on this aspect, if the question were "does it work?" the answer would be yes, even within the limits of a very superficial arcade gameplay and without a real challenge.

Having mentioned the plot and the peculiar ability to change everything in the race, it is good to explain that Starlink is an open world that grants the player the freedom to visit the surface of seven planets extremely well-finished in appearance and wandering around a, albeit limited, portion of interplanetary space full of points of interest and resources to be recovered. In fact, the whole game system is based on recovering resources, mods, artifacts, minerals to be exchanged or bartered to improve the statistics of the ship or the Equinox IV.. Even the character selected in the beginning has statistics that improve over time, including affinity with mounted weapons expressed by a progress bar. On balance this is nothing worthy of note or innovative, if it were not that parameters such as resistance to enemy fire or the speed of recovering the energy consumed are essential to get the better of some secondary missions already from the second planet discovered.

every celestial body is literally stuffed with things to do

Beside these, every celestial body is literally stuffed with things to do, such as outposts that must be saved from the presence of the Legion, mining centers to forage for credits, nests of warlike aliens that must be purged to ensure research facilities can explore the surface without interruptions, unknown beasts whose DNA can be read in order to classify them and, more generally, dozens of other side elements insignificant for the journey to the credits but harbingers of a longevity that goes to double that required to complete the main quest. The greatest flaw of Battle for Atlas lies in all this goodness, namely its repetition: at the third outpost restored, at the tenth Imp nest made to shine, at the umpteenth autochthonous animal scanned one loses the taste for discovery and realizes to play only to unlock an objective or to be able to tell oneself in the mirror that you have discovered “everything, everything, everything”.

Arrived this far, I will take you back to the starting point, explaining better what I meant when I wrote that I could not overcome the blank page block. Starlink: Battle for Atlas is a video game with attention to every detail, you see it every time you see an element of the scenery in the distance or drive your ship between the ribs of a dead animal on the surface of that planet who knows how, who knows when. The control system, perhaps overly simplified by features such as the horizontal jump and the energy armor to be used as a mirror to reflect particular types of shots, even if it does not scream a miracle, it allows you to enjoy every fight without going crazy with particular requests for precision. and aims (or rather: only in some cases). The environments are rich, colorful, full of hotspots and all to be investigated to discover the secrets of that narrative universe. The characters are charismatic enough to be nice, even without reaping victims due to identification. In short: everything would work fine ... as long as I find myself locked up in a country house with a PC without internet and in front of me there were three summer months to escape from.

I have played Starlink: Battle for Atlas on PlayStation 4 and PC, via Uplay, thanks to the codes provided by the publisher and I own all the spaceships produced by Ubisoft Montreal, including the limited editions to foreign countries. 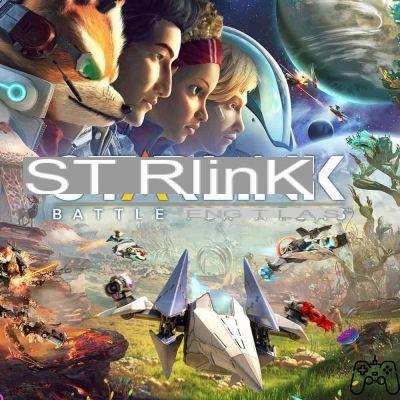 The truth is that in my SSD there are 300 GB of games to try, while in my online libraries rest a few terabytes still virgin and I have no drive or desire to get lost on Starlink's planets to examine all their angularities. In large part this lack of grip on my (little) free time is due to the lightness of a gameplay which, even if it has many variables, remains too simple, repeating sector after sector. You know Red Faction Guerrilla? Here: take off that patina of "game for hard-hearted revolutionaries" and you will get something like a Starlink without spaceships. What I have left, then, is a linear challenge and a bit of grinding to better face the bosses. If the gameplay had had a pace comparable to that of Lylat Wars, with sequences and attack patterns to learn by heart for a perfect run, perhaps my experience with Battle for Atlas would have been different.... but as I wrote at the beginning Starlink is not a shooter nor a 4X in which the freedom of action could have supported the entire gaming infrastructure, so that 75 used to label products that lack something to excel is the only one possible vote.

On PC, it's a little wonder of color and shape. I don't know to what extent my nostalgia for a time that no longer exists affects the effect that saturation produces on my senses, but each planet has given me so much Nintendo-style joy.

The soundtrack is forgettable, while the Italian dubbing must recognize a certain profession. The strings of dialogue are interpreted, there are no errors and really no criticism can be made to the team that located it.

The control system is simple and arcade, the main missions are sufficiently captivating as well as that wandering through space escaping from the traps of the Forgotten Legion to reach a planet or a pile of debris ... but everything is repeated in an almost redundant way since immediately, without a challenge worthy of being deepened with practice.

Did you like the article? Share it!
Audio Video Starlink: Battle for Atlas, from Canada with love
What is the Team Balloet Balloon event and Pokémon Go email? ❯

add a comment of Starlink: Battle for Atlas, from Canada with love