Stellaris: the review for his third birthday

Stellaris is a strategic 4X that is really difficult to tame, either for the countless possibilities of developing very different civilizations, or for the many DLCs released in these three years since the vanilla publication. Engaging in a technical review is out of my league for two reasons: there are people out there who have spent thousands of hours discovering new solar systems, colonizing them with the dozen "species" put on the plate by Paradox Development Studio - from robots to plants - to test the dozens of possible combinations between forms of government, ethics, religion and diametrically opposed regional policies. Secondly this article is not intended for exceptional strategists but for those audiences who love the genre, without being fanatical about it, and sees Stellaris among the Steam and GOG discounts but is afraid to spend those few euros required just to "give it a chance". Finally, the Swedish title turns three just in these days and we thought it was a good and right thing to talk about it here on Gameplay Café, given its still being very current in the panorama of the genre in which it belongs. Here, I want to clarify it immediately even if you have already gone to peek at the vote (because I know you): it is worth every penny taken from your credit card even just to dedicate the thirty hours necessary to have a paltry taste of the complete menu.

Therefore, assuming that you have thrown your heart over the hedge and selected a species at random, perhaps opting for a spiritualist and thrifty oligarchy that uses the power of mining guilds to make money, where each of these choices implies bonuses and malus to other characteristics. such as population growth, ease of integration with aliens, the amount of resources that can be recovered, the growth of leaders, the speed of military production, the relationship between supply and demand of work, skill in science ... but I could continue until tomorrow morning only by listing variables, you would find yourself in front of a 3D map, with a semi-free camera of your native solar system, and a tutorial.

Stellaris is worth every penny taken from your credit card

You will obviously have installed the precious Italian translation of BoP Italia, which are always praised, then you will be guided step by step in the exploration of the surrounding territories, in the construction of orbiting bases, in the discovery of anomalies on now sterile planetoids, in the colonization of other habitable systems, in the construction of a fleet capable of patrolling the perimeter or support the defensive systems of the capital, but also in the choice of which districts to build in your cities, which direction to give to religion (if you have adopted one), which research projects - there are more than three hundred - are priority to accelerate your expansion also from a sociological point of view or how to set a trade route.

I realize, writing about it, that here I can only offer you some examples of the infinite equation represented by the management of civilization offered by Stellaris, because as I type “sociological” I think of the engineering research on the exoskeleton that I started yesterday; when I reflect on faith I remember having launched the first game by opting for a secular democracy; if I think about the collection of useful resources for a correct progression of my "space merchants", the desire to build an interactive version of Mass Effect's Reapers is burning. All this without having yet to mention diplomacy, space battles, ship design, internal feuds generated by the discontent of the population or… stuff that, in terms of complexity, Civilization VI is a cartoon for kindergarten children. In short: the correct adjective to frame Stellaris is "immense", where a clean interface and an unhurried progression allow you to savor the expansion of our civilization with the necessary calm in the procedurally generated galaxy with customizable dimensions and characteristics.

in terms of complexity, Civilization VI is a kindergarten children's cartoon

Developing an efficient economy, promoting good (or bad) policies or grinding scientific advances are not enough actions to get the better of alien species, however. Sometimes the use of brute force is unavoidable, with battles in which, even if you do not have control of the individual units that make up the RTS-style fleet, you can witness real pitched clashes where, to bad parade, you can only get away with it. In this sense, the preparation phase is the fundamental one: between the choice of weapons, reactors, shields and type of hull there is something to indulge in. It would be useless to make a list of everything that can occupy the slots of the ships or which engines can be equipped, because the customization phase follows the impressive variety of the other features of the game and I would end up mentioning only what I put my hand on in the first few thirty hours of gameplay. The fact remains that Paradox has focused heavily on this aspect also to distance itself from its other products such as Europa Universalis: the limits imposed by the historical context in Stellaris do not exist and the imagination can “literally” take flight. Far more intriguing, however, is the diplomatic implication: federations can be formed, vassal relationships, bartering primary assets, carrying out joint scientific discoveries, annexing solar systems already claimed, declaring war ... an ecosystem of which, I admit, I have only seen a small part given its "getting lost" among the links of a longevity in some ways unknown to me until now.

I played Stellaris, the vanilla version, thanks to a code provided by the publisher for about 30 Earth hours, trying two different races and two diametrically opposed forms of government. 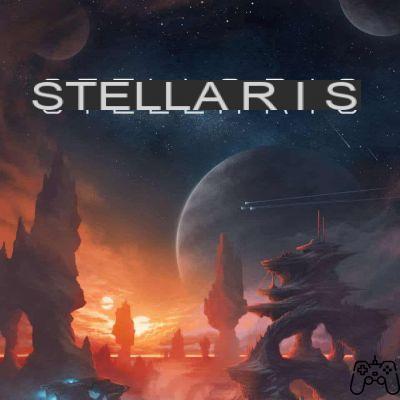 Looking for flaws in Paradox's impressive variegated playfulness would be like trying to count all the needles of that famous haystack my grandfather was talking about: cui prodest? It is obvious that someone may not find the interface comfortable, that someone else complains about the absence of a technology tree or the impossibility of managing the movements of ships in battle, even going so far as to demand a more pressing pace ... but here we are between casual gamers who are wondering if Stellaris is worth the ten euros required to start the download or not, so: no. There are no smudges so obvious as to advise against buying them as long as you have the desire to experiment with some healthy strategy in real time. Before saying goodbye, anticipating that I also have Imperator: Rome in the download queue, I want to reiterate that in these three years there have been numerous DLCs that have added species, vessels, policies, anomalies and an indefinite number of other variables, not to mention the mare magnum of the mods. It is a real universe, condensed into just under 8 GB, in which, as that advertisement of the 90s said, “there is to be lost”.

Effective and clean, with a still spectacular rendering of the planets. Played on my 32 "in Full HD it is a marvel with no flaws or slowdowns.

Good background music, skippable as we were on iTunes. The dubbing is in English and does its duty.

90 dry, as well as the final grade, because in a strategic one of this magnitude the gameplay, the mechanics, the variables are the only thing that really matters ... and Stellaris, in this sense, is a masterpiece.

Did you like the article? Share it!
Audio Video Stellaris: the review for his third birthday
Luigi's Mansion 3: all the gems floor by floor in video ❯

add a comment of Stellaris: the review for his third birthday