The definitive guide to Final Fantasy on Nintendo Switch 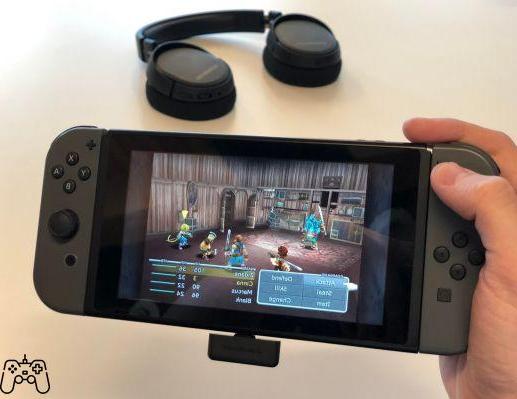 Maybe this is your first time getting close toiconic Final Fantasy series or maybe, after a long pause, you have decided to return to play it. If you've played exclusively on Nintendo platforms, you may have missed out on many of the saga's biggest titles. But don't be afraid, this guide is for you!

After having been previously released on PlayStation and Xbox for years, finally several Final Fantasy games are also available on the Nintendo Switch. So we decided to target you the best so that you can get the best possible experience from the series.

But stop the chatter and let's start:

Final Fantasy X (The one to play absolutely first)

Absolutely recommended for those approaching Final Fantasy for the first time.

FFX is the last to offer turn-based combat and it does it in the best way; even though the game dates back to 2001, it continues to be very good today. In addition to the truly accessible gameplay, you will be able to experience one of the most compelling storytelling ever seen in the world of video games. If your intention isn't to become hardcore Final Fantasy players, FFX is a great place to start. Better yet, it has really deep systems that cater to the more adventurous gamer.

World of Final Fantasy, offers a super casual experience that is very fun and affordable for everyone.

It has some new battle mechanics and systems very similar to Pokémon titles. At the same time, the game sees the return of turn-based combat (which we mentioned earlier on FFX). World also has a fascinating chibi art style and a really fun world to explore. Of course, there's nothing wrong with starting a simpler game to learn its basics and mechanics.

Final Fantasy XII: The Zodiac Age is a little harder to recommend as it is truly different from any other Final Fantasy. It is advisable to play other titles in the series before trying your hand at this one.

The Zodiac Age employs a very passive battle system that is more like the gameplay of an MMORPG. FFXII is still considered one of the best by some fans of the series, but it may not be the most auspicious for newcomers. Throwing yourself headlong into this "adventure" might be a bit shocking; however, there is no denying that Final Fantasy XII is a tremendously good game.

Final Fantasy IX (To be played after playing FFX)

When it comes to the best Final Fantasy titles, longtime fans usually gravitate towards VI, VII, and IX. Final Fantasy IX is the latest set in a medieval fantasy world, and also seems to be the latest entry in the series that has been "retouched" by the father of the series, Hironobu Sakaguchi.

While Final Fantasy IX might seem a little odd to those unfamiliar with PlayStation games, (they haven't necessarily aged the best), it's still a great story and some improvements have been made on the Switch to make it a little smoother. . This is a must play for any JRPG fan, but it's not necessarily the Final Fantasy game to be played right away by beginners.

Final Fantasy VII (The last one in turns)

“Return to the beginning of the original”

Everything you've heard about Final Fantasy comes from this game. Final Fantasy VII redefined storytelling in video games and made the JRPG genre a mainstay for years to come. It has probably aged poorly compared to the previously mentioned titles, but it's still an important game and a staple in video game history. Because of his retro nature, the experience proposed by FFVII could be quite challenging, especially if you are not familiar with the saga.

Final Fantasy VII is an absolutely fantastic journey, and the Switch version brings with it a whole host of improvements that should make it a little easier to play. Get busy and don't neglect the importance of this JRPG, especially for storytelling, absolutely sublime.

Even with Final Fantasy X HD

Final Fantasy X-2 is a solid sequel to FFX. However, if you are only interested in mainline games, you could easily skip it. FFX-2 changes the cards in particular from the point of view of combat, which goes to experiment with several new styles. The game also features three women who are absolutely fantastic. However, our advice is to give it a chance, you won't regret it.

Regardless of our recommendations, feel free to follow them or not, make sure you take the right time to enjoy each of the titles mentioned to the fullest. The proposed quality is pretty good, without considering that it is certainly a really high time for Nintendo Switch owners and JRPG fans!

Videogamingallday.com Help Did you like the article? Share it!
Audio Video The definitive guide to Final Fantasy on Nintendo Switch
Guida di WWE: Smackdown! Versus Raw ❯