A premise is due in the opening of this review by The Lego Star Wars Holiday Special. The writer, born in '85, has learned to love American cinema and blockbusters also thanks to the seminal work of George Lucas. However, I do not deny that I am among the many who have badly digested the passage of the franchise to Disney and that I have absolutely not appreciated the sequel trilogy and the new characters, net of the pleasant exception represented by Rogue One.

It will be senility, it will be a natural evolution of cinematic taste but, today, I look at Star Wars as something that belongs to my childhood past and not something that I could take more too seriously. And so this Christmas special, light-hearted and unpretentious, brought me more than a smile and took me back to that galaxy far, far away, with ease.

A long time ago…

The events of this Christmas special, shortened in duration by forty-five minutes, they kick off after the ending of Episode IX, Rise of the Skywalkers (here our review). Rey and the rest of the surviving characters, aboard the Millenium Falcon are preparing to celebrate "the day of life". In the meantime, however, Rey finds a new adventure in an ancient Jedi book that will lead her to travel, together with her faithful BB-8, to a mysterious and ancient planet. Here Rey will find "the Key", a large diamond-like artifact that has the ability to open space-time gaps.

The "impossible" encounters between characters belonging to such distant eras are actually the main comic mechanism at the basis of this medium-length film.

Here then served the pretext, in fact very unoriginal, to catapult Rey into some of the most iconic scenes and moments of the entire saga, from Luke's training with Yoda on Dagobah from The Empire Strikes Back to the duel between Obi-wan Kenobi and Anakin Skywalker on Mustafar from Revenge of the Sith. Pretext to meet again a multitude of characters who have been part of the galactic adventures of Jedi and Sith, from Emperor Palpatine to Kylo Ren, without forgetting some absolutely secondary characters that every super Star Wars fan will not fail to recognize.

Not infrequently, in fact, we will find multiple temporal versions of the same character on stage and so the farmer Luke will meet the Jedi master Luke and it will also happen to see three different versions of Obi Wan in unison on the screen.

In short, the narrative has very few claims of any consistency and in the finale, as befits a Christmas special, the initial status quo is restored. What we are aiming for is undoubtedly the exaltation of the comic potential of these tremendously popular characters. From this point of view, as per Lego tradition, the goal is certainly achieved and the film by Ken Cunningham flows away tearing more than a smile. Certainly do not expect to laugh out loud, we are not talking about a cutting or irreverent humor, but rather a celebratory and good-natured comedy. It is also obviously a product that is aimed at a young audience, so you know what to expect.

Surely also the limited duration of the film helps to keep the rhythm and succession of the gags high. A longer duration would probably have shown inexorably the emptiness of the script and swayed the interest of the older audience. From a technical point of view, however, the film is rather standard, with the animations of the characters very pleasant and in line with other films based on lego bricks. Definitely less inspired are some backgrounds that, at times, suffer from a lack of details and anonymous design (for example the Jedi temple in which Rey recovers the artifact, at the beginning of the film). In general, one has the impression of being in front of an animated film with a limited budget and intended for the small screen.

Obviously, almost superfluous to say, the original sound effects and music of the saga, by John Williams, are fished out and shine as always in the ears and hearts of fans. 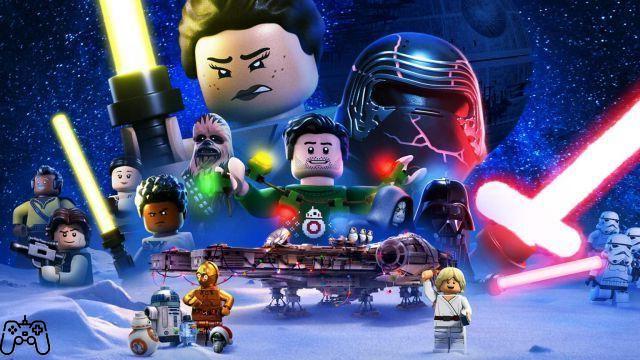 We therefore close this review of The Lego Star Wars Holiday Special with a timid promotion. It is certainly not an essential product but entertains and entertains with honesty, making good use of the iconic elements of the universe created by George Lucas. If you have an hour to spend in carefree, perhaps with your little ones, we recommend it without hesitation.

The Lego Star Wars Holiday Special will be available on Disney + starting November 17.

Review of videogamingallday.com Did you like the article? Share it!
Audio Video The Lego Star Wars Holiday Special, la recensione
How to Beat Sierra in Pokémon Go for October 2021 - Weaknesses, Tactics, Counterattacks ❯