Great games don't have to be big. This is the sentence highlighted on the official website of Mi'pu'mi Games, a small Viennese indie team born in 2009 with the aim of offering industry veterans a more humane and less pressing job perspective. Although the team contributed to the development of the new Hitman engine and has already faced a number of outsourced commissions, The Lion's Song was the group's first original experience, now working on six new projects.

The debut title of Mi'pu'mi Games fully respects the tagline with which the text of this review opens, in fact presenting itself under the guise of an intimate, story-driven and static video game aimed at representing - through four interconnected chapters - the Austrian Belle Epoque from the early 900s, up to the inevitable end of the First World War, all with a truly noteworthy quality of writing.

About a year after the release of the last episode, The Lion's Song also arrives on Nintendo Switch, after being ported even to iOS and Android. If you want to know more, you just have to read our review!

Halfway between a visual novel and a point and click adventure, The Lion's Song is one of those video games that have very little playfulness, approaching the formula that made Kan Gao and his To the Moon famous. The narrative is precisely the great and only protagonist of the complex parable that you will find yourself traveling in the shoes of the four main characters (not considering some flashbacks of the last episode), namely Wilma, Franz, Emma and Albert.

Wilma is a talented composer who, by a stroke of luck, is noticed by Arthur, rector of a professorship in the prestigious city of Vienna, who will help her find her inspiration in the moment of greatest difficulty, without worrying about the pressure imposed on the girl. Franz, on the other hand, is a rising star of Viennese high society, a symbol of that figure of a reflective and decadent author who could not be missing in an effective representation of the artistic currents of the early twentieth century. Franz's pictorial portraits lay their foundations on the psychological layers of each person, layers that the boy can see with the naked eye, almost by instinct moved by an analysis that does not involve himself.

If Wilma and Franz formed the humanistic bases of the late Belle Epoque, Emma is undoubtedly the forerunner of the scientific ones., now far from those contaminations of mysticism that had characterized the research of previous centuries. Although she is a brilliant mathematician, Emma finds herself forced into a society where science moves with male traction, precluding women from accessing subjects of theoretical or empirical observation of reality. In an attempt to elbow down in misogynistic circles, the woman changes her name to Emil, appropriating male clothes and giving life to a series of awareness that will surely leave you amazed, especially for the solutions - graphic and metaphorical - through which these are told.

Finally, finally close to the fateful death of Archduke Ferdinand (casus belli of the First World War), Albert is an aspiring journalist who finds himself having the burden of closing the stories mentioned above, constituting, together with his three traveling companions, the common thread able to connect them all, guaranteeing a sense of closure and completeness that cannot leave you indifferent in its maturity.

In short, you have not already understood from the celebratory tones with which the screenplay was described, net of some difficulties in the rhythm, the plot of The Lion's Song has succeeded in the enterprise of moving and kidnapping me without resorting to predictable stereotypes, rather by resorting to often innovative storytelling techniques. The four narrative lines not only follow a common leitmotiv, although each has its own thematic core, but boast different points of contact (more or less direct, up to real twists), almost invisible threads guided by love, from friendship and drama, often hidden in the objects scattered in the rooms or in the various optional dialogues.

I played The Lion's Song mostly in portable mode, during a weekend at the beach. He kept me company on hot July afternoons. 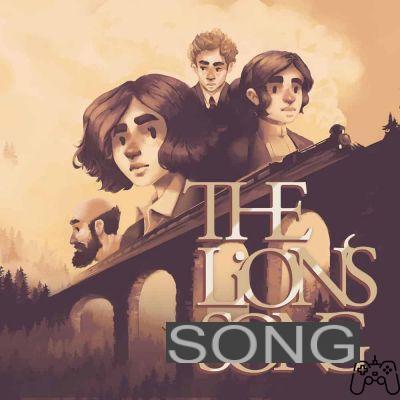 Like any self-respecting story driven adventure, you are also given the opportunity to make some choices to shape the fate of the characters as you see fit; although there are indeed branches depending on the options selected, the bulk of the progression nevertheless remains unscathed, following the main canavaccio defined - within narrow limits - by the developers.

After having extensively dealt with the script of The Lion's Song, it's time to discuss the two pillars that support it, that is the graphic / artistic department and the soundtrack, both of which, I anticipate, of considerable caliber, able to raise this one even more. little indie pearl.

The static environments - sometimes recycled but rich in detail and historical reproduction - are brought to the screen through a three-color process that is very reminiscent of the limitations of the monochrome LCD screen of the never too late Game BoySo here are shades of black on white that embrace a nostalgic retro effect, mixed with animations that are modern and fluid enough to give life to the stylized facial models of the protagonists and supporting actors.

The navigation in space and the interaction with objects and characters, albeit limited, as already mentioned before, takes place exactly as in a point and click, mechanics in several cases set aside in favor of texts and dialog boxes completely localized in Italian with a good result, but not excellent compared to the original version. It seems quite foolish about the absence of support on Nintendo Switch for the touchscreen and directional arrows, perhaps inaccurate yes, but always appreciated as alternatives to the uncomfortable analogue of the Joy - Con left.

The entire sound sector of the game deserves a final applause, where an excellent sampling of ambient sounds is added to the inspired soundtrack - moved primarily by a large orchestra of strings.. The qualitative accent of the entire direction is expressed precisely in the Song of the Lion, the moving piece composed by Wilma which gives its name to the work of Mi'pu'mi Games and which accompanies the player during the five hours necessary to complete the four episodes.

Ultimately, you will not regret having invested ten euros in such a complete and refined product, courageous in tackling unconventional and complex issues and multifaceted in their presentation. I hope, if you decide to buy it, that you will come out enriched as I did.

The Lion's Song takes up the Game Boy's three-color LCD screen and readjusts it to an inspired art direction aimed at depicting the late Viennese Belle Epoque. The animations are functional to expressiveness and there is no lack of introspective and out of the ordinary graphic solutions.

The audio sector remains at very high levels for the duration of the experience, thanks to a perfect mix of soundtrack and ambient sounds.

Although there is very little playfulness in this experience, The Lion's Song manages to thrill the player thanks to the excellent writing of the four episodes represented, interconnected by a common thread that runs throughout the work. However, the lack of support for directional arrows, touchscreen and HD Rumble on Nintendo Switch is disappointing.

Did you like the article? Share it!
Audio Video The Lion's Song
How to get Ursaluna as a ride-on Pokemon in Pokemon Legends: Arceus ❯