Before you read the rest of this review, I have to make a premise: in the past I've never played any other chapter in the Monster Hunter series, so Monster Hunter: World for PC is my very first contact with the Capcom title. By continuing to read, you will not find considerations related in a particular way to other Monster Hunter, but the summary of the sensations experienced by a player who has approached for the first time to the world of monster hunters.

An approach that will have been common to many in recent times, thanks to the PC version of Monster Hunter: World. Net of some minor chapters not outside the borders of Japan, the Monster Hunter series had never crossed the threshold of the console universe. It has been doing it for a few weeks now, using its most ambitious chapter to try to conquer PC users in the West, a few months after the release of Monster Hunter: World on consoles, which took place at the beginning of 2018.

So let's start from the basics, going to understand what is Monster Hunter: World. First of all, it is a game capable of arouse some fear in those who approach it for the first time, like other Japanese productions, but once you have managed to get into its mechanics it turns out to be engaging and all in all simple. The game is set in a open world, where the players impersonate some hunters engaged in facing the huge monsters that are located in the various territories of the map.

The dynamics are quite simple: starting with weaker creatures faced with a basic equipment, the player can defeat the aforementioned monsters to collect material to use once back to base. The forge present in the central hub of Monster Hunter: World is in fact used to create new items, thanks to which to hunt for stronger monsters, and so on. A real cycle, with which it is possible to summarize the whole arc of Monster Hunter: World, characterized by progressive challenges that naturally put those who find themselves in front of the monitor in front of more demanding objectives to achieve.

As for the plot, in Monster Hunter: World we are called to take on the role of one of these hunters, sent by the Fifth Fleet along with other colleagues in the New world. The goal is to find out the details of the so-called Crossing Of The Elderly, a migration that sees the oldest dragons committed to the lands where we find ourselves moving our steps. Without going into too much detail, also to avoid spoilers, we can limit ourselves to saying that while without touching particular peaks the story of Monster Hunter: World manages to be followed without problems, relying on the spectacular setting of the game to keep interest alive.

Once you get into the dynamics, as we said, the gameplay becomes quite familiar. The ability to go hunting alone or in a group is able to reconcile those who love solo games as well as those who are crazy about multiplayer, even if some problems of the first hour in the connectivity on PC have a little slowed down the online aspect of Monster Hunter: World on this platform. The game is anyway perfectly enjoyable alone, or rather together with your Palico: it is our companion with feline features who accompanies us throughout the game, following us as we go around and actively helping us in the hunting phases.

Beyond the main line of missions, Monster Hunter: World offers a number of other activities that add to its already considerable amount of hours necessary to complete the story and the main commitments of the endgame. If you play alone, you will hardly spend less than fifty hours in the New World, breaking through the wall of a hundred in case you love to get lost in the details. While it requires a certain amount of "grinding" to obtain certain elements, with the aim of opening the doors of Monster Hunter: World to a wider audience, Capcom has luckily made life easier for players compared to what were the dynamics of the series in the past. 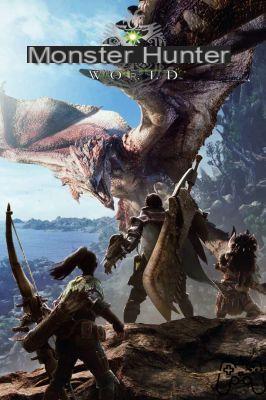 Monster Hunter: World requires some patience to be appreciated. The game does not make it a mystery right from the start, where a long tutorial takes us through the various elements that make up the effort of Capcom. For those like myself who are beginners with this series, learning all the dynamics of the game can mean invest a fair amount of time in it, after which it becomes possible to appreciate all that beautiful Monster Hunter: World has to offer. The important thing is to be willing to enter his hunting loop, letting yourself be involved in an exotic setting and epic battles with giant monsters. Soon, you will hardly be able to do without it.

The visual aspect is obviously where Monster Hunter: World for PC differs most from the PlayStation 4 and Xbox One versions. The power of the hardware available allows players to choose the best without having to compromise with the balance between detail and performance, provided of course you have a configuration that allows it. More than in terms of glance, the PC version therefore shines for fluidity, keeping the number of frames per second constant even in the most complicated situations, net of some problems with the camera.

The action of Monster Hunter: World is accompanied by a never intrusive soundtrack, able to underline the moments of greatest tension in the clashes with the gigantic creatures that we face. The good quality dubbing is entirely in Italian, as are all the texts in the game.

The control system shows itself first of all without smudging, both with the use of the controller and with the mouse and keyboard. An initial period of learning is soon rewarded with dynamics taken care of down to the smallest detail, where the use of one weapon instead of another requires mastery and an adequate fighting style. The clashes with monsters are never trivial and test the alertness of those who are playing: dancing around our goal, identifying their weaknesses (also thanks to the special diary) and how to exploit them at the right time is a combination that puts Monster Hunter: World gameplay at the pinnacle of fun.

Did you like the article? Share it!
Audio Video The Monster Hunter: World review for PC
How to evolve Nosepass into Probopass in Pokémon Brilliant Diamond and Shining Pearl ❯

add a comment of The Monster Hunter: World review for PC