Roboante is the best adjective to describe Valfaris, as every fundamental aspect is dedicated to Metal. Both the playability and the soundtrack and the setting are capable of understanding this musical genre in a perfectly fitting way.
The protagonist looks like a sci-fi reinterpretation between Conan the barbarian and a Manowar album cover: Therion is mighty, long-haired, pleased with his victories and dedicated to headbanging to celebrate the challenge of every new instrument of death he finds in his path. The planet Valfaris in fact fell into chaos after the father of the protagonist, an interstellar despot, abandoned him, leaving him prey to multiple threats. The mission is divided into 8 levels that expertly mix Star Wars and the imagery of epic metal, outlining a more original identity than the usual sci-fi.

Starting from these assumptions, the gameplay can only be full of action, at a slightly less frenetic pace than the run & shoot Contra, getting closer to action-platformers like Turrican, which both served as a model for the creation of this. During the levels you will have to face the enemies using both firearms and sidearms, marking the progress with well-designed platform sequences. The set of these elements is therefore measured, without placing too much emphasis on a specific aspect, but giving the right space to each task, denoting attention to ensure that everything is equally important. Stronger ranged hits consume the secondary bar, which can be recharged by destroying enemies with melee attacks, preventing the player from ending up neglecting either of the two.

The platform phases are built on an excellent level design, with a fair variety of situations to face, secret areas with bonuses and additional items. The linearity of Valfaris never becomes a problem and indeed, leaves a fair amount of space for replayability, not only to discover some new areas, but also to try to use a selection of alternative weapons, all characterized in their use and specific abilities.

The developers have opted for a particular enhancement system, which does not allow you to fully use all the arsenal in a single game. In each level there are different idols, which can be spent to enable spawn points, or stored to exchange them for upgrades. This means that resources are extremely limited and granted only to those who want to give up some checkpoints, to work harder but increase the power of their blades and guns. Consequently, at the end of the first game it will be easy to have concentrated on a restricted range of instruments, giving the opportunity to deepen the others in the next one.

The degree of difficulty is set quite upwards, especially due to the very tenacious bosses, but able to offer engaging battles. Longevity is sustained for a game of this type, even reaching five or six hours if you try a first game with the aim of already upgrading some weapon (and therefore running into some restarts, not being able to count on all the checkpoints ). Obviously the subsequent raids, or the more cautious ones, can last even less, however in any case the average duration is fully satisfactory.

The graphics have two-dimensional elements with pixels, however not always homogeneous, and sometimes very effectively animated characters, sometimes composed in a more coarse way. The whole is well modeled, slightly rough in parts, but equally striking, with a good amount of detail. The art direction also helps, creating a world steeped in both space work made of lasers, robots and spaceships, and sword & sorcery with bronze, baroque ornaments and magical necropolis.
The soundtrack obviously has some deep metallic guitar and drums underpinnings, but it doesn't indulge too much on them so as not to go off topic with respect to the setting. In fact, at times these tracks will remain snare, but under the skin, giving way for a few moments to more evocative sounds, to better accompany the fantasy aspect of the game with a perfectly blended coexistence of the two key themes.

Valfaris is a title that features 2D action and platform elements. It is suitable for anyone who loves action-packed and challenging games, perfect for those who enjoy classics like Turrican, Contra or Metal Slug. It is developed by the authors of Slain: Back from Hell and is available in digital format for PC (Steam and GoG.com), Playstation 4, Xbox One and Switch. A disc / cartridge version is available for Playstation 4 and Switch via import. 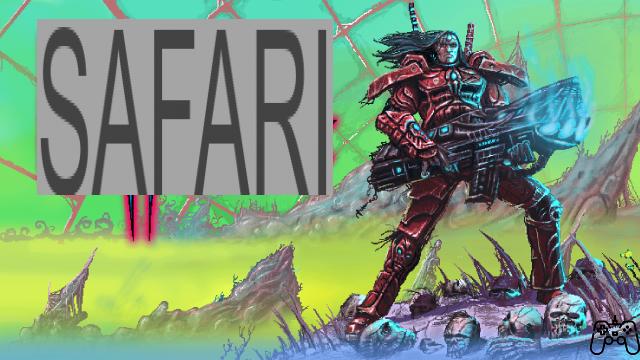 The graphics are overall good, the pixels are present in a more limited way in some points, denoting a slight roughness and lack of uniformity in the care of the models. The whole is still valid, discreetly animated and embellished with numerous contour effects and details.

Music that mixes with perfect dosage both the instrumental strength of the metal, and more surreal sounds suitable for the fantasy aspect. The result is perfect for enhancing both the action-packed gameplay and setting.

Perfectly balanced platform, action and shooting mechanics, each with its own importance in the game's economy. The upgrade system linked to the creation of checkpoints creates an additional challenge step, encourages exploration in search of secrets and bonuses, allowing you to better appreciate a good level design.

Did you like the article? Share it!
Audio Video Valfaris, the science fiction cimmeria
Detective Gallo ❯

add a comment of Valfaris, the science fiction cimmeria