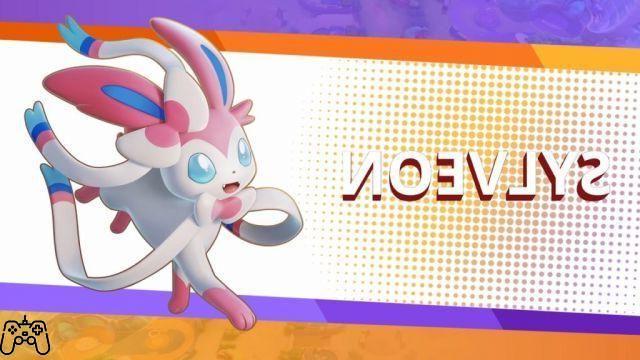 Sylveon is the latest Pokémon to join the Pokémon Unite roster. The first Eeveelution in the game is a Ranged Attacker which is suitable for the role in the jungle. Though soft, Sylveon deals a lot of damage and is able to heal itself.

Sylveon starts out as Eevee and has access to Swift / Baby-Doll Eyes early in the game. Swift is a basic ranged attack, while Baby-Doll Eyes reduces the target's attack and movement speed for a short time, as well as dealing damage. It is best to start the game with Swift as it is easier to spam and execute. Regardless, you will learn the other move when you reach level 2.

Eevee evolves into Sylveon at level 4, which is relatively early compared to other Pokémon in the game. After the evolution, players can upgrade Swift in Hyper Voice or Mystical Fire. Hyper Voice allows Sylveon to launch a barrage of sound waves that deal damage when they hit the target. Additionally, the damage dealt by waves increases with distance traveled. On the other hand, Mystical Fire creates flames around Sylveon that shoot at nearby enemies, dealing damage and reducing the Sp. Atk of the targets hit. The move is capable of inflicting insane damage, but the flames are difficult to control and is RNG dependent; Hence, Hyper Voice is a more stable and viable choice to choose between the two.

At level 6, Baby-Doll Eyes can be upgraded to Draining Kiss or Calm Mind. Draining Kiss allows Sylveon to blow a kiss to the target that goes back and forth before disappearing. When the kiss hits the target, it deals damage and reduces the target's movement speed. On the other hand, when the Kiss touches Sylveon, it heals the Pokémon. While the move provides sustainability, it is difficult to execute and use effectively; Hence, it is recommended to choose Calm Mind, which increases Sylveon's SP. Atk, Sp. Defense and movement speed for a short time after use.

Sylveon learns Fairy Frolic (Unite Move) at level 8. The move knocks Sylven into the air, making him invincible for a short time. Upon landing, Sylveon deals area damage to opposing Pokémon and restores some HP.

Since Sylveon has low health, Focus Band can be useful in frictional moments as it allows the user to regain some health whenever he is low. Wise Glasses and Choice Specs round out Sylveon's base build as both of these items provide a significant damage boost.

For the preferred Battle Item, players can choose X Attack as it increases Sylveon's damage output for a short duration; However, the eject button offers safety and escape, which is always beneficial for soft Pokémon.