Il Borderlands Fortnite evento is coming, with the games' official Twitter accounts confirming the crossover with "Fortnite x Mayhem"(#FortnitexMayhem) hashtag. What can we expect from the new Fortnite Borderlands 3 evento? Well, the Pyscho package allows players to dress up as their favorite madlad, and the Pandora Rift Zone gives Fortnite players a bite to Borderlands Experience. In order to enjoy the new event, players will first need to download the last update, which is about to be launched on PC, PS4, Xbox One, iOS, android, Nintendo Switch. 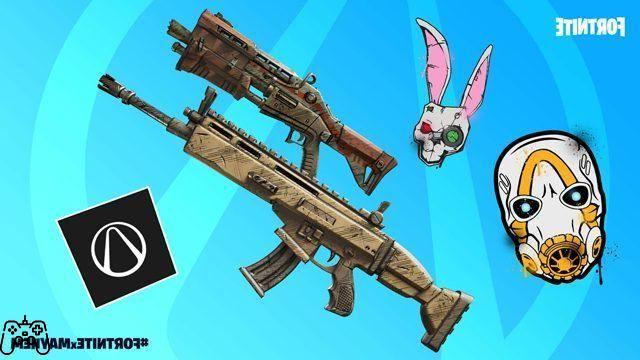 Borderlands Fortnite skins are on the way, with the Psycho Bundle now available in the Item Store. The teasing began with the official Fortnite Twitter account tweeting an image containing a Borderlands psycho mask, and with what Borderlands 3 being a PC-exclusive Epic Games Store, the crossover then made sense.

With the Borderlands Fortnite running until September 10, it is possible that we will see more themed skins made available for purchase. Good options would be the new Vault Hunters - FL4K, Zane, Amara, and Moze - as well as fan-favorite characters like Lilith and Tiny Tina.

After seeing events like Fortnite X John Wick and Fortnite X Avengers, everything now seems possible. Developer Epic Games' next trick is to bring the world of Borderlands to Fortnite, with a Pandora Rift Zone that causes part of the Battle Royale island to transform into an apocalyptic wasteland, complete with stylized black outlines.

Players who venture into the Pandora Rift Zone will regenerate shields. The developer also teased that "there are more surprises for (players) to discover as they (wreak) havoc on Pandora."

As for whether the limited-time Mayhem mode will be added to Fortnite, which remains to be seen. It is possible that the developers will implement it with the update scheduled for next week. If so, you can expect official social media accounts to start rolling out teasers within the week.

What would Borderlands seem like a limited-time event at Fortnite? Well with Borderlands 3 coming out, a mode that encourages teamwork between four players in co-op would be appropriate. Obviously, Fortnite Teams already encourage it, so perhaps the "Chaos" part of the "Fortnite x Mayhem" event name teases that chaos is coming.