Back 4 Blood, the worthy successor to Left 4 Dead

When it was announced, Back 4 Blood has left many players indifferent, convinced that they are facing yet another zombie shooter. The more experienced public, on the other hand, immediately pricked their ears, especially after reading the name of Turtle Rock Studios. The American team is known in the gaming world for giving birth to Left 4 Dead, one of the most popular FPS ever. FPS that boasts a very active community even today, made up of players who can't take their hands off the keyboard and who live to face hordes of the undead.

As of October 12, Back 4 Blood has hit the shelves (physical and digital) around the world. A global release that allowed the title to be released on PlayStation 4, PlayStation 5, Xbox e PC. As if that weren't enough, for all subscribers to Xbox Game Pass, the game is available now at no additional cost. A well-considered choice, which allows the work published by Warner Bros. Interactive Entertainment to reach an even wider audience.

Furthermore, the choice to include Back 4 Blood in the Game Pass is particularly efficient for a product of this type. After all, it is a title capable of giving its best in four players, a feature that would involve the purchase of four copies of the game. In a time of big releases, finding four friends who are willing to spend sixty euros may not be as easy as you might think. The excellent service of Microsoft, on the other hand, forcefully breaks down this barrier and allows the public to take part in this virtual carnage with a minimum expense to say the least. Well done, everyone, for making this important decision for the game community.

THE MUTATION IS DONE IN FOUR

Despite the lively title of its cooperative nature, Back 4 Blood presents a campaign that can also be tackled in single player. The storyline put together by Turtle Rock Studios is as simple as it is effective. A group of survivors must be able to survive the disease that has spread to Earth. A disease that has led to parasites giving the undead a second life. Between one call for help and another, our heroes will have to face terrible monstrosities and do everything possible not to join the ranks of deformed creatures.

A few details on the story mode

We don't hide it: the Back 4 Blood story is certainly not the strong point of the game. The narrative passages are rapid and there is never a moment where the writing dwells on the deeds of our protagonists. It doesn't matter, however, since the purpose of Back 4 Blood is to be as hectic as it is rewarding in the shooting. To be honest, we were also amazed at the quality of the characters' dialogue. Nothing really profound, mind you, but the exchanges have often left a smile on our lips. In fact, during the four long acts that make up the Campaign, we found ourselves loving our virtual alter-egos. A result that, for a production of this type, is already well above the average.

However, we would like to point out a feature that could make many turn up their noses. If you decide to tackle the story alone, you will not receive any Supply Points for your player. This makes it impossible to enhance the character, castrating the main attraction of Back 4 Blood. A choice that highlights even more how the work of Turtle Rock Studios has been weighted to be enjoyed with your friends.

BELIEVE IN THE HEART OF THE CARDS

How would you react if we told you that, in Back 4 Blood, you can collect cards and thus increase the stats of your survivors? Yes, the American team has devised an interesting stratagem to make the games always different. Players will be able to create their own deck with fifteen cards inside. Cards that allow characters to increase their skills and gain specific abilities related to stamina, health or physical attacks. By obtaining the aforementioned Supply Points we will be able to buy new cards and thus improve our deck. We will even be able to create different builds, so you can create decks aimed at speed and others to care for your teammates.

Don't worry, in addition to the cards you also shoot a lot!

This is just the starting point of a really successful game system, who knew how to conquer us right away and threw us into a whirlwind of death, compulsive buying of cards and perfecting the truly exhilarating character. Each map can then be tackled at three different levels of difficulty, which will allow users to earn more and more points. Furthermore, at the beginning of each session, the game will insert random modifiers with the aim of further complicating our life.

But don't worry, because in Back 4 Blood you don't just collect cards, you shoot a lot as well. The shooting of the Turtle Rock Studios title, as experienced in the beta, is the direct evolution of that of Left 4 Dead. The result? A fresh FPS, frighteningly fun and able to give the right thickness to all the guns. Beating hordes of creatures is extremely fun and, especially in the company of friends, can turn out to be a real digital drug. We do not doubt, in fact, that this new product can replace the aforementioned work published by Valve within the gamer community.

Finally, an applause also to level design, always varied and satisfying. Each area has precise rules, mechanics and situations capable of making the experience unique. Many hours will pass, therefore, before you begin to feel the fatigue of repetitiveness. Feature that, for a title like Back 4 Blood, is really essential.

We also report the presence of a competitive mode called Swarm. In this case, players will compete in teams consisting of 4 survivors and 4 creatures. A nice variant, but which will inevitably soon leave space in your hearts for the cooperative counterpart.

DEVASTATION AT SIXTY PHOTOGRAMS PER SECOND

From a technical point of view, Back 4 Blood defends itself well, while not hiding its cross-gen nature. On Xbox Series X, the title of Turtle Rock reached 4K and 60 FPS, allowing the work to be enjoyed to perfection. Graphics performance drops noticeably on Xbox One, but the game goes to great lengths to maintain stability in the frame rate. A very specific choice by devs, who preferred to focus on fluidity rather than single aesthetic details. The polygonal models of characters and monsters, however, do not clash in the least and have been able to fully satisfy us. A praise for the creature design of the undead who, while maintaining the classic types of enemy, are cared for and grotesquely fascinating.

The soundtrack is also excellent which, although not always present, highlights the most important moments. We were also impressed with the quality of the dubbing in our language, frighteningly good for a production so little focused on fiction. Incredible, in fact, the care placed in each item. A cure that, as we stated at the beginning, has allowed us to become attached to our unfortunate survivors.

We tested Back 4 Blood on both Xbox Series X and Xbox One, finding the version for Microsoft's new console significantly superior across the board. On the last generation platform, the Turtle Rock Studios title prefers the frame rate to the amount of detail. A choice that, for recreational purposes, seemed extremely sensible to us. 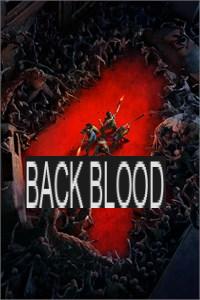 Back 4 Blood is everything Left 4 Dead fans have been waiting for. The game is fun and a lot. The work of Turtle Rock Studios features a long-lived campaign, numerous settings that can customize the experience and a truly successful card system. If you add to this a quality technical sector, a splendid level design and a truly marked variety of situations, hunting undead could become one of the main activities of the coming months. Back 4 Blood should also be purchased at full price, but being in possession of the Game Pass and not giving it at least a chance should be considered a crime. So what are you waiting for ?! Recruit four friends, download the game and get ready to spend hours and hours of bloody fun.

Back 4 Blood, from a visual point of view, defends itself very well, while not hiding its cross-gen nature. The developers have clearly paid more attention to the frame rate, rather than the polygonal mass of characters, environments and creatures. Some elements are even careless, but the creature design and the general fluidity have won us over to the point of being satisfied anyway.

Back 4 Blood has an inexplicably great soundtrack and voice acting. Not that we regret it (on the contrary), but we did not expect such care from a title that makes gameplay its strong point. The end result, on the other hand, is a successful soundtrack and a frighteningly high quality Italian dubbing. A praise to some musical choices designed to enhance certain actions. Choices that we do not anticipate, to let you discover them in person during your games.

Back 4 Blood is the clear successor to Left 4 Dead. As such, therefore, it is simply a must have for all zombie arcade FPS fans. The creation of Turtle Rock Studios amuses, entertains and amazes from all points of view. The level design is inspired, the shooting satisfying and the innovative card system won us over right away. In short: are you looking for a title to face together with your friends? Back 4 Blood is for you.

Did you like the article? Share it!
Audio Video Back 4 Blood, the worthy successor to Left 4 Dead
What are watts in Pokemon Sword and Shield? ❯

add a comment of Back 4 Blood, the worthy successor to Left 4 Dead