The Ancient Gods Part One - DOOM Eternal: The Beginning of the End

After subverting the balance of the cosmos in Doom Eternal, the Slayer prepares for the final confrontation with the demonic forces. Grab your shotgun and make your way through the twists and turns of our review of The Ancient Gods, but be ready! You have no idea what Hell has in store for you ...

Seven months ago we started ours Doom Eternal review talking about his renewed narrative sector. Well, The Ancient Gods on this front does not differ at all from its predecessor, but rather, it raises upwards. The desire to tell a story and paint a universe behind the Slayer is now more evident than ever. Armed with the greater freedom granted by the expansion nature of the title, the developers were able to give vent to their creative vision, concentrating here such an amount of lore e plot that would not have disfigured in a main chapter. At least as we've always known Doom to date, of course.

The result is excellent and benefiting from it is primarily the rhythm, pressing now both on the narrative and playful fronts, but also the work as a whole, strong in a increasingly convincing mythology and fascinating. While not introducing new characters, The Ancient Gods does a flying double dash to the tale, carrying on the story of the Slayer perhaps more than the whole Eternal did. The decision to throw so much meat on the fire already in this first part of the DLC alone can only reconfirm the team's ambition and give us hope for the future of the series. For now, get ready to be amazed by at least a couple of twists really well placed. Although, it must be said, some fan-theory on Reddit had really caught us ...

Then of course, if we want to be meticulous, the resistance of some should be highlighted roughness in the narrative which, especially in the early stages, still occurs excessively cryptic and fragmentary. But we would risk being bastards, as well as fussy, since it is clear that the priorities of the work remain other. In short, what matters is that the direction taken, this time, is the right one. And it is, without a doubt!

For me the eternal pain goes away

In The Ancient Gods, the developers hit the pad on the difficulty pedal. Let's make it clear right away: the game will hurt you. Oh, it sure hurts. The Fantasy Combat Puzzle and the philosophy of Push Forward they are pushed beyond human limits, to the point of being incredulous at the complexity of some arenas. Not understanding where to start killing the dozens of demons on the screen is the practice rather than the exception, and not infrequently you will find yourself smiling through clenched teeth, wondering if those of Id Software are not fooling you. Hordes of enemies follow one another relentlessly in a sadistic game of relaunch. In this regard, the three new demonic additions work great, in particular as regards the parasitic spirits and the turrets, whose mechanics have also been declined in two boss fight exquisitely flavored old school.

As you may have guessed, in short, The Ancient Gods proposes all the magnificence of the Doom Eternal gameplay. The also return here platform sections, well balanced in terms of duration and quantity, still exquisitely hardcore, which we already appreciated in March. Me too'scouting is re-proposed with the same formula of the past, but this time enhanced by the size of the new maps. Let's be clear, the latter is still fast and basic, but we believe it integrates perfectly into the game's economy, constituting a pleasant diversion, useful for breaking the adrenergic charge of clashes. At the same time we appreciated the attempt to introduce some new game design solution, like the toxic fog in the second mission. We could have dared (perhaps) even more in this sense, but the result is phenomenal even so: full promotion!

We played The Ancient Gods thanks to the Steam code of the DOOM Eternal Deluxe Edition provided to us by Bethesda. The test configuration is equipped with now mid-range hardware (RX 590 8GB, Ryzen 5 2600 and 16GB RAM), but it allowed us to play the entire expansion in 1080p with all settings at Ultra-Nightmare, with a frame-rate granite, anchored at 60 frames per second. The DLC can be purchased individually for € 19,99, or as part of the "Year One" annual pass for € 29,99. 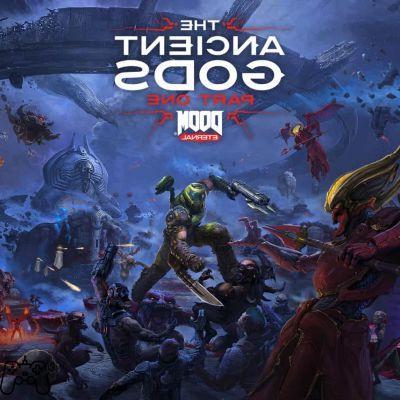 On the technical-artistic front, The Ancient Gods is as monumental as its predecessor, of which it presents itself as a manifest synthesis. If it is true that the three missions of the adventure reproduce the main architectural styles of Eternal (UAC base, Underworld and the kingdom of the Maykr), it is also true that they do it in the best possible way, enhancing its stylistic refinement and features color palettes. In terms of sheer brute force, the title is unwavering and perfectly optimized on all hardware available today, but that certainly comes as no surprise. On the other hand, what is surprising is the quality of the sound sector that many believed would have suffered a downward decline after the death of Mick Gordon. Fortunately, this was not the case and Andrew Hulshult e David Levy they managed to give their own distinctive mark to the soundtrack while remaining extremely faithful to the source material.

Ultimately, we can not help but applaud this The Ancient Gods. Id Software was as skilled in smoothing out the angularity of the base game, as it was courageous in pushing the series towards new shores, especially in narrative terms. Difficult and rewarding, The Ancient Gods is a cathartic riot of blood and buckshot, never so fun to play. A must-buy for the new generation fans, a heart skip for old-time fans: don't miss it!

Side note: As a standalone expansion, The Ancient Gods can also be played in the absence of Doom Eternal. A practice that we do not recommend, but which could represent a valid entry point for new players, given the inclusion in the package of Battlemode, the multiplayer sector of the base title we talked about in ours deepening dedicated.

The performances offered by Id Tech are now synonymous with guarantee and this time too you will not be disappointed. Unwavering even in the most agitated scenes, the graphic rendering of Doom Eternal is monumental. Too bad, however, for the persistent absence of support for Ray Tracing.

The newcomers sign an extremely good soundtrack, even without the historical presence of Mick Gordon. Excellent dubbing in our local language.

The perfection of Doom Eternal, improved and chiseled where possible. A pretender to the FPS throne for the present generation.

Did you like the article? Share it!
Audio Video The Ancient Gods Part One - DOOM Eternal: The Beginning of the End
Assassin's Creed Odyssey: How to unlock the Legendary Beasts mission ❯

add a comment of The Ancient Gods Part One - DOOM Eternal: The Beginning of the End