Bee Out - of monkeys, drums and jazz

Here finally on Gameplay Café the review of Ape Out: title created by Gabe Cuzzillo and released a year ago on Nintendo Switch and PC. Devolver Digital has a great passion for video games with character, personality and a positive presumption to do only and exactly what should be in their DNA: entertain and surprise. Ape Out is all of this: a bizarre and innovative project, simple but articulated, in which jazz music, escapes from strange workshops and an explosive artistic style are mixed to give players one of the best pearls that went almost unnoticed last 2019.

Ape Out offers virtually no narrative: the player plays the role of a monkey who must escape. Few frills and a way of direct communication with typographies printed on the screen indicate to the player the simple commands and the general direction of each level, after which the action is taken. Controllable on Nintendo Switch using only analog and triggers, the protagonist gorilla moves through the levels, generated procedurally, defending himself from the attacks of enemy soldiers that hinder his escape and that end up one after the other thrown inexorably against the wall, on other pieces of the scenario or used as shields against other unfortunate colleagues. However, the simplicity of the control system should not deceive: Especially in the final levels, Ape Out can be a tough title with waves of aggressive and frequent enemies. A right combination of speed and clarity in the action is what it takes to overcome the thirty levels available. The gameplay is simple, satisfying and immediate and perhaps it would have deserved a greater study to the approximately three total hours of play that Ape Out offers.

Among the protagonists of Ape Out there is the sound aspect. The entire title is accompanied by a jazz soundtrack composed by Matt Boch with sounds that are ringed procedurally based on the player's actions. The result is an engaging rhythm of powerful, chaotic and almost deafening percussion in their composition that accompanies the gameplay in a fabulous way. The sensation of ape-like strength, the heaviness of the blows to the enemies with their frightened cackles are elements that the sound design fits perfectly with the response to the commands of the game mechanics. The whole game marries the jazz theme to which the names of the levels and their organization into discs are also dedicated.

The jazz music that gives so much to the entire title is also a harbinger of great inspiration for its artistic style. Ape Out is visually constructed as if it were a moving poster of a jazz concert in full art deco style. Wanting to name an author from whom Cuzzillo probably drew inspiration, we can mention Saul Bass, historical graphic designer author in 1958 of the poster for Vertigo by Alfred Hitchcock. From the perspective from above that follows the gorilla in the scenarios to the clear lights and shadows that stand out in the levels, the composition is dictated only by flat colors enriched by dirty and animated textures that create a super vinyl effect imposed on the entire scene. The moving typography that often appears in the scenarios is a touch of class of rare beauty in the gaming field, along with the beautiful DEAD screen that summarizes the movements made in the scenario. In short, it is useless to continue to praise: Ape Out is an artistic masterpiece, and his second place in our ranking of the best artistic directions of 2019 also testifies to it.

I played Ape Out on Nintendo Switch with a personally purchased digital copy. The game is also available on PC. 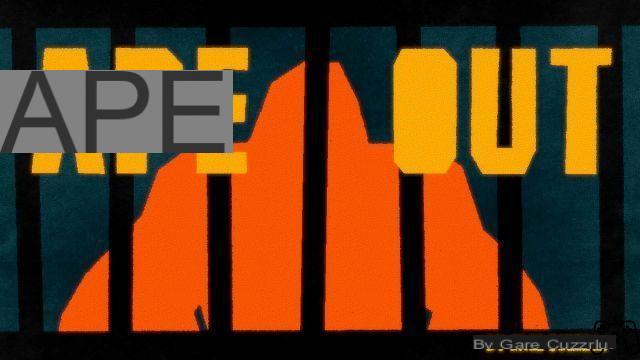 Ape Out is a title that knows how to generate surprise, excitement and a real sense of power as you go through its levels with an angry gorilla trying to escape. The artistic style and the sound accompaniment are the key elements that embellish a simple but well-balanced gameplay system that lacks only a pinch of variety and extra longevity. Gabe Cuzzillo has produced a real gem: if you didn't play it a year ago, get it back now.

The art style is unprecedented and also from a technological point of view the game runs smoothly on the Nintendo Switch.

A show of jazz percussion and fast-paced rhythms accompanies each level with a perfect harmony between gameplay and sonic response. There is no dubbing.

Solid, immediate and fun, the gameplay of Ape Out knows how to entertain even without particular innovations or insights.

Did you like the article? Share it!
Audio Video Bee Out - of monkeys, drums and jazz
Minecraft Earth Adventures | Where to find Adventures locations ❯

add a comment of Bee Out - of monkeys, drums and jazz