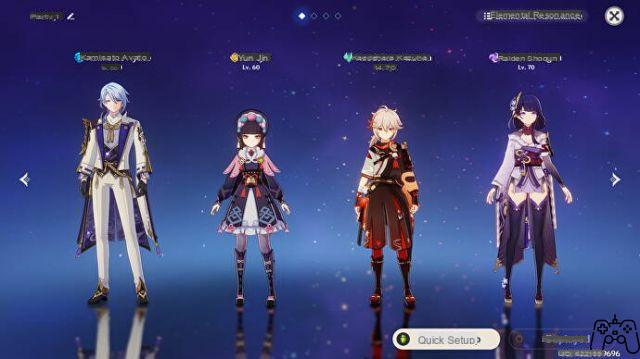 In this Genshin Impact Best Party Setups guide, we will explain some key rules you should follow while forming a team in Genshin Impact. We'll also give you some team examples.

While Genshin Impact is essentially a PvE game that can be played with any set of characters and you will probably get along just fine.

But, seeing how detailed the combat is and the different elemental abilities and reactions, you need to understand a few rules if you intend to build a handyman team to clear some of the more difficult areas easily.

Dealing damage, using your elemental skill or simply killing enemies generates orbs which are used to replenish your character's energy allowing him to use his Elemental Burst abilities.

Some spheres have a designated element on them which gives more energy to the character of the corresponding element.

Seeing this, you should always make sure that your main Damage dealer and a supporting character are of the same elemental type.

The elements are an important part of the combat system and the world of Genshin Impact.

Each element has a different reaction when paired with other elements that cause certain buffs and debuffs during combat.

For example, using Overload o Electric is useful on elemental damage teams as it allows you to deal more damage.

Super Conduct, on the other hand, reduces the enemy's physical stamina making him vulnerable to more elemental damage.

Having a character on your team that allows you to create these elemental reactions is very helpful for the DPS character to deal more damage.

Divide the team into roles

The best way to maximize a team's overall effectiveness is to set roles for each character.

We like to divide our team into 3 key roles:

Support
This role is responsible for generating orbs of energy for the DPS character so they can remain aggressive with quick reloads in between.

The main supporting character should always be of the same basic type as the DPS character.

Having an Anemo support character on your team also helps a lot as Swirl attacks absorb the properties of other elements and reduce the enemy's stamina, making things a lot easier for the one primarily responsible for the team's damage.

Healer
This role is responsible for healing the entire team, especially the DPS character as they continue to take damage on the front line.

It's always a good idea to keep an Anemo healer on your team so they can act as support characters as well.

Form a team
Now that the basic rules are out of the way, the best way to start building a team is to find a character you like and feel is appropriate for your play style as a main character dealing damage.

Once you have decided on the character, you already know that you need a support character of the same elemental type to create Elemental Resonance and additional orbs for the DPS character.

Another support character who can create elemental reactions like Overload e Super Conduct.

And a healer (preferably an Anemo character) who heals the entire team, especially the one primarily responsible for the damage.

Team examples
Below are some examples of balanced teams

Although we have listed some teams, you are free to create your own unique team by keeping these rules in your mind.

So, form a team of your liking and start exploring the beautiful world of Genshin Impact!