It almost seemed as if they had given up on us. Why produce games with a healthy purpose? With all those beautiful "Gaming" chairs that are being sold, why on earth would anyone make us get up from those comfortable armchairs born of good marketing?
Nintendo has been trying since 2008. After attempts with Wii Fit e Wii Fit Plus (2009) it seemed that even for Nintendo the fight against posture and the extra ciccietta was a lost war.
But no. As good fighters and revolutionaries, they try again with yet another Fitness game. This time adding a decidedly interesting accessory to the recipe (much more practical than the old one Balance Board) and creating game mechanics that go far beyond the sterile sequence of exercises.

No, that's not a bad word. The Ring-Con is the new accessory designed specifically for playing and practicing with Ring Fit Adventure. This ring allows you to perform a very wide range of exercises. Once the right Joy-con is connected to it, the latter will allow us to navigate the menus, select the activities to perform and, well, do the exercises.
Thanks to its resistance, compressing the Ring-Con allows you to perform a wide range of exercises that activate different points of the muscles: from the arms to the legs, passing through the abdominals and the torso.
Thanks to the gyroscope incorporated in the Joy-Con it is also possible to carry out purely aerobic exercises, therefore without exerting strength on the Ring-Con, but simply by moving it from top to bottom and from right to left, as in Yoga sessions.

To give a hand to the Ring-Con takes care of the leg band. A classic sports band from the tie to the left thigh in which to place the left Joy-Con. With this second accessory the variety of exercises that can be undertaken is completed and expanded since, always using the gyroscopes inside the Joy-Con, it becomes possible to establish the position of the leg in space. Obviously opening the way to all exercises based on push-ups, running on the spot and various push-ups.

In addition to the new accessory and the abandonment of the very heavy Wii Balance Board (which just placing it on the ground was already a medium intensity exercise), Ring Fit Adventure bases its innovative formula on a precise aspect: adventure.
As the name of the game says, the main objective of the title is to let us play a real adventure.
Once you have created the Alter Ego monster (it is simply a matter of choosing the sex and color of skin and eyes), you are catapulted into a whole new world.
There we meet Ring, a talking ring with mysterious powers which, in fact, represents the Ring-Con that we hold tightly in our hands.
You soon learn about the purpose of the game: to defeat the bad guy on duty, a super-fit and nasty monster intent on spreading darkness all over the world.

Nothing could be simpler, right? In a normal game it is enough to continue the story, venture into the villages and woods, defeat the enemies in classic turn-based battles, level up, improve your equipment and arrive comfortably, sitting in our favorite gaming chair, at the final confrontation.
Everything is the same here too, with the exception of the part on the chair and on the comfort. To continue in the levels it is necessary to run in place, overcome obstacles by compressing the Ring-Con and to fight against enemies you are forced to ring sequences of physical exercises.

The soul of an RPG and the spirit of the sportsman

The nature of the adventure is, as we said, that of the most classic of RPGs.
You accumulate experience points, explore new worlds, earn money to spend on smoothies (potions) and equipment, and fight.
Worlds are thought of as whole exercise sessions. Divided into individual levels, each with its own series of increasingly challenging exercises. In the common levels you run and defeat enemies and in the final level you fight the boss and give vent to a series of more intense and rhythmic exercises.

The role-playing nature of the fights allows you to face the clashes with a discrete calm, preparing for the game turn only when you are considered ready, perhaps after having drunk a nice glass of water between one clash and another.
Fighting means choosing the exercise that suits us best or the one most useful against the enemy - at a certain point the combat function by color will be available, if the color of the exercise coincides with that of the enemy you do more damage - and do it at the same time. better allows you to maximize damage.
To optimize the line of exercises, the system provides a recharge period for each move used, so as to force the player to vary the exercises and maximize the effectiveness of the session.

The variety of environments, enemies and the duration of the adventure give an excellent incentive to continue playing, to create a program and want to respect it.

The graphic sector, while passing into the background, is pleasant and clean, using pastel colors and rough polygons. However, venturing into the play areas is pleasant and comforting. The style is more reminiscent of some indie titles due to its simplicity and its colors, but it adapts perfectly to the objective of the game, making the player focus on the correctness of the exercises and on the correct posture.
The dubbing in Italian is also nice, well interpreted and useful in exercises that involve twisting or bending that do not allow you to follow the writings on the screen, being guided step by step by the voice.
Excellent choice of music and sound effects. Shy and pleasant in the phases of relaxation and more intense in the most agitated and energetic phases.

To continue in the levels it is necessary to run in place, overcome obstacles by compressing the Ring-Con and to fight against enemies you are forced to ring sequences of physical exercises.

As mentioned, Ring Fit also allows you to tackle the exercises individually, create a daily series or, more simply, try your hand at the proposed mini-games.
Each of these activities can be recorded in the user's diary, taking into account the profuse fatigue and calories burned.
Surely these modes are useful when you have little time, you want to let friends try the game or if you want to follow a precise series of personalized exercises.
However, the adventure mode remains the best and most complete choice to face an effective exercise session, even once completed.
In fact, Ring Fit initially adapts to a precise exercise intensity, which can be scaled or amplified according to our improvements and the desire to overcome. So what initially could have been a simple level in the adventure, at the second Run (it should be said!) Will require a greater commitment.

Why yes and why not

Trying Ring Fit Adventure for about ten days I can say with some certainty that the differences in effectiveness compared to a WiiFit are all there. The old Balance Board for Wii was limited to correct posture and an almost static use of the peripheral, while the Ring-Con and the leg band allow a series of movements and exercises that are decidedly more targeted, vast and effective.
The compression of the Ring-Con alone makes you feel effective muscle use right away. Combined with the movements of the legs and the different possibilities offered by the Ring-Con itself (and the many exercises connected to it), they contain the possibility of doing real and complete exercises in the living room.

Let it be clear that Ring-Con and headband do not replace professional tools, with activities followed by a personal trainer or thanks to a gym membership. But they encourage those allergic to the list just described to carry out the bare minimum of physical activity, from the comfort of home.

A natural evolution of the Fitness games launched (and forgotten) years ago. I enjoyed playing Ring Fit Adventure for several hours, feeling a good result and well-intentioned to continue using it. 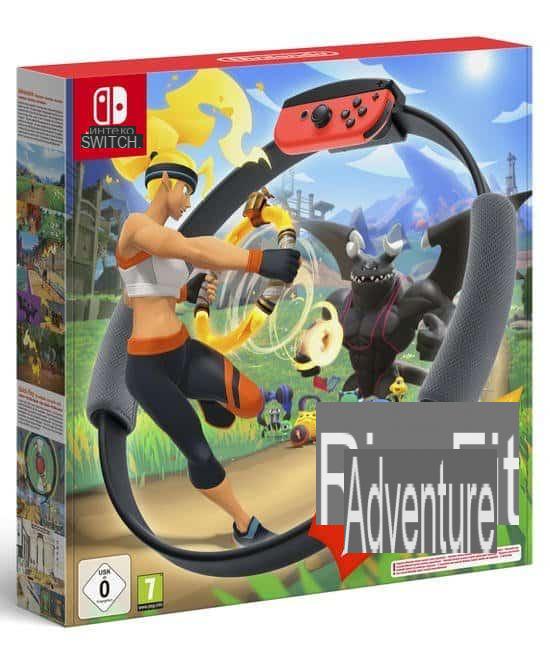 The satisfaction of increasing the intensity of the exercises, effectively beating an enemy and seeing the improvement of one's physical condition are still a good incentive to commit.
I myself have gotten excited several times in being able to perform good maneuvers and get excited for the achievement of some goals, not to mention the satisfaction that you get when you break your own record or that of a friend. Yes, because in RingFit there is also a ranking with the results of friends. This feature is inexplicably not available if you don't have a Nintendo Switch Online subscription.

Let it be clear that Ring-Con and headband do not replace professional tools, with activities followed by a personal trainer or thanks to a gym membership.

Obviously, both the main mode and the accessory modes (from mini-games to single exercises) are all based on fitness and the desire to burn some calories and wake up the muscles a little.
If these things don't interest you in the slightest or if you have a major physical activity elsewhere, this game is not for you. The results are there, if you approach the game as a real commitment and with the right consistency, but they cannot replace a complete physical activity such as the gym, swimming and so on.
The focus is on whether or not you are part of the target: do you want to keep fit, lose weight, burn fat, get muscular and spend hours doing exercises? Then do more complex activities.
Are you allergic to the idea of ​​the gym and / or have little time, but still want a reason or an excuse to do a minimum of physical activity? Then Ring Fit Adventure could be a good compromise to start working on yourself.

Pleasant and colorful, a huge step forward compared to the Wii Fit ancestor. Excellent menu management and icons as big as houses to make everything clear, playful and fresh.

Basic but pleasant and functional dubbing. The musical sector is good, with light and relaxing motifs as much as they are rhythmic and strong. Always follow the style of the exercise.

Fresh, dynamic and effective. The Ring-Con works beautifully and it is very rare for it to "lose track" having to recalibrate it. Incredible accuracy.

add a comment of Let's fight with Squats with Ring Fit Adventure!